Our first Screen Talks event of the Autumn Term will be on Monday 7th October at Exeter Picturehouse. Dr Matt Hayler (Lecturer, Dept of English) at the University of Exeter) will introduce Upstream Color (Shane Carruth, 2013)

Dr Matt Hayler has written a guest blog-post for us on the film and the ways in which it challenges us as viewers with a vision of life forms and cycles which does not put the human at the centre: 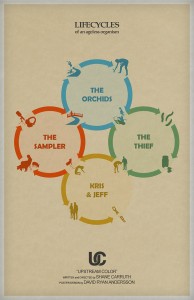 I can remember exactly where I was when I realized that Upstream Color was probably the most hauntingly beautiful science fiction film that I’ve ever seen. It wasn’t watching it on a TV in my front room, running an imported region 1 disc through an Xbox within weeks of its release because I loved Shane Caruth’s first movie, Primer, so goddamn much I couldn’t wait for a UK screening. It wasn’t in a cinema, with a decent screen and comfy seats and barely tasted popcorn as I focused, silently, intently, on the colours and the images and the few scant words of this posthuman fairytale – that’s a treat I’ll get for the first time on Monday at Exeter’s Picture House. Somewhat embarrassingly, I worked it out about thirty seconds into this trailer, which I watched maybe ten minutes after my first viewing as I devoured any and all information about what I’d just seen, and which basically amounts to a stream of fairly comprehensive spoilers, but only if you’ve watched the movie that it’s meant to advertise. That trailer tells you nearly everything about the story, or helps you work it through, but it does so by using words and images from the film in order to articulate things that that film just somehow made you feel.

And by now you’ve probably worked out that I don’t know how to talk about this thing. At least, not much anyway. If you haven’t seen it yet I’m guessing that you’ll probably come out of the cinema a bit baffled, hopefully impressed with some of the things that you’ve seen on screen, but wondering what’s gone on, what exactly happened in that last 90 minutes or so. I’d also guess that at that point you know, but maybe not in words yet. Upstream Color possesses the remarkable ability of telling you a story without words (nothing new) and making you comprehend it somewhere muscular, and visceral, and bloodied (something rare). After a couple of viewings and some reading I can pretty much tell you what goes on, but it’s that sense impression that lingers, is maybe stronger than what I’d try and articulate if you pressed me to discuss the plot. My body, and that bit at the back of my brain that connects me and some ancient lizard, remembers that Upstream Color is a movie about shared memories; knowledge passing across the barriers of species; the fears of reproducing; the fear of losing yourself, of losing your barriers, of schizophrenic openings up. And it remembers the colours and the pigs and the takings of places in cycles.

I’ve already used the word “posthuman” and that, alongside this bodily response, is what links this movie to my work, at least in some oblique way. I’m interested in how technologies affect us to such an extent that they interfere, often productively, with our pre-linguistic experience of the world – I wonder if the lifeforms in this movie could be considered to be technologies in some sense, extenders of agency, interruptions between actor and environment? And is that what makes it science fiction rather than fantasy (it certainly feels right to call it that)? This is certainly a film about unspeakable action and unsaid sensation.

Posthumanism, at least by one definition, is a philosophical outlook which doesn’t see humans as the centre of experience, or aesthetics, or meaning, and doesn’t see “humanity” as a fixed and coherent thing from which there might be deviation, but instead sees the human as always-already malleable, plastic. When I write about new technologies, and our intimate experience of becoming experts with new things, I start to think about posthuman ideas, about the changing status of humanity. The evolution of the biosciences promises to make the question more and more pressing over the course of this century – what will humans look like by its close? Upstream Color offers us a posthuman mythology, where characters dissolve into the world, everything can be as beautiful, or more, as love, and individuals are surpassed by cycles. The trajectories of parasites and viruses, their effects on behaviour, take on near religious significance here, but military interest in toxoplasmosis’ potential for mitigating human risk aversion lends another technological edge to the emergent behaviours of the film’s cast of flowers, grubs, pigs, and human vectors – we’ll probably be using nature’s natural hacks to intentionally change ourselves before long. Upstream Color offers, at times, a beatific vision of that work; at its heart it offers us the potential of communion in a whole host of forms.

Matt lectures in contemporary literature, theory and culture at the University of Exeter.  He researches the interactions of technologies and users, and the place of the body in processes of reading and understanding.  Find out more about Matt’s research here, and on his blog here.