For the blog task this week, we were asked to offer critical evaluation of primary sources relating to Toshiro Mifune’s legacy and resonance of his star image. Our analyses were constructed individually and offer a short portfolio of the writing styles in our group. 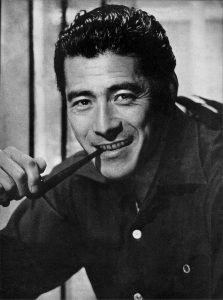 The use of Toshiro Mifune’s iconography is incredibly evident on the shopping website ‘Redbubble’, especially the page of results once Mifune’s name is typed into the search engine. The products that use Mifune’s image as a commodity, range from T-shirts and telephone cases, to stickers and posters. This shopping website shows how Mifune’s legacy is still commercially in demand and marketable, perhaps as audiences today still find his star image relevant. This audience may specifically be more male dominant, which is reflected on ‘Redbubble[’s]’ results page, as all of the clothing is modelled by men, even though it is sold as ‘unisex’. The actual images that are branded on the merchandise are mainly Mifune in character as ‘Sanjuro’; close ups of his face with the recurring tagline ‘What would Toshiro Mifune do?’. His star image is also simplified further with prints of a collection of samurai swords within a red circle, which shows how even just the elements of his character image are recognisable and hold meaning for fans.

A documentary serves as a tool that reveals intimate details about the life of person that is well known within a certain societal sphere; such as an actor or a political icon. This audiovisual trailer for a feature-length documentary confirms Toshiro Mifune’s everlasting presence within the film industry; immortalising his on-screen talent and star-image by presenting audiences with a man that was multifaceted and three-dimensional. In order for something so intimate like a documentary to be constructed, the object of desire, whether that is a person, location or movement, must be interesting and possess the capacity to “influence, motivate or raise awareness for viewers so that they think over a subject critically” (DocFactory, 2016).

We can apply this notion to the star image of Mifune. Mifune’s star image is one of which that is steeped in traditional Japanese values, stoicism and ambition, thus creating a star image that audiences can engage with or self-identify with. His ability to adapt, shape and change roles with “quickness” not only exhibits his talent, but also forms a multi-dimensional model of which audiences are able to identify with and use as everyday influence. Although you could argue that the position of a Samurai is somewhat unattainable in the mundane world, Mifune represents the desire of achieving whatever it is that you are seeking; as the documentary reveals his unorthodox transition into the film world from entering a talent competition in 1947, despite him showing “no interest in becoming an actor”.

Referred to as being “like the ocean” within the trailer, Mifune’s legacy continues to circulate within the film sphere, dominating the Japanese post-war period as the ultimate embodiment of the “Samurai”, then transcending and firmly grounding his star-image into contemporary society. We can observe this resonance within contemporary film society as despite his death in 1997, his legacy continues to live on. This is demonstrated in the 2016 documentary recounting his personal life, struggles and accomplishments; suggesting that he made an unequivocal impression on the film industry, not only as an actor, but as a human being.

The documentary presents Mifune’s star-image as remaining perpetually relevant to contemporary cinema, as Keanu Reeves, the narrator of this telling documentary, discusses that “there would be no ‘Magnificent Seven’ without ‘The Seven Samurai’,  no ‘A Fistful of Dollars’ for Clint Eastwood without ‘Yojimbo’” (Turran, Kenneth). Here, we can undeniably deduce Mifune’s everlasting star-image that remains within the film industry today.

New York Times published a biographical article after the tragic death of beloved star Toshiro Mifune; commending and reminiscing on moments from his film career. The discussion gradually informs the reader of Mifune’s reputation and legacy as the “most internationally celebrated of Japanese film actors”. Including a brief filmography, this obituary gently glazes over significant achievements from his past which were essential in establishing Mifune as a “screen idol”. For example, the audition he attended which caused the first encounter between himself and director Kurosawa. Frequent collaborations later on with Akira Kurosawa implied Mifune was an inspirational muse to Kurosawa’s direction and work. He even believed it necessary to state the immense positive impression that Mifune made, saying ”I am a person rarely impressed by actors… but in the case of Mifune I was completely overwhelmed.” This relationship is comparable to more modern affiliations between directors and actors, such as Quentin Tarantino and Uma Thurman. In cases such as this, it is important to recognise the conscious choice of reusing the same actor and why this may be. While he typically portrayed the samurai protagonist role, New York Times credits the “astonishing range” of characters and genres that Mifune could perform in post-war Japanese cinema. The diversity stretches from an adaptation of Shakespeare’s Macbeth in Throne of Blood to skillful samurai action in Sanjuro. The popularity of his style, technique and look led him to be involved in “more than 120 films” in his lifetime. This demonstrates that the success and acclaim was due to his individual talent and justifies why he was awarded “best actor of the year at the Venice Film Festival”.

The article develops by addressing further accomplishments which did not directly correlate to his acting alone. Mifune’s fame enabled him to form “his own company, Mifune Productions”, a company which produced films across a couple decades, but ceasing to continue in the 1980s before his death in the 1990s. His legacy did however survive through not only the films he acted in, but those his company produced and the stardom which surrounds popular celebrity culture. New York Times acknowledges how Mifune impacted audiences by referencing a Japanese magazine which “conducted a survey to determine who its readers thought best epitomized Japanese manhood and its ideals of pride, power and virility. Their choice: Toshiro Mifune”. This source itself refers to Mifune as being a “primal hero of samurai films” and therefore believes that his legacy must live on after his death because many appear to agree that he can be credited as the archetypal Japanese samurai actor; one that can never be replaced.