From this article, it is evident that Toshiro Mifune was seen as a legendary actor, well known internationally, especially for his appearance in films by Akira Kurosawa. The article reports on Mifune’s death at age 77, traversing through his timeline of films and describing Mifune’s style as “a screen-idol magnetism and an astonishing range stretching from classical tragedy to light comedy.” Mifune was mostly known for his samurai character, explored here in depth by focusing on his emergence in Kurosawa’s films, and how important his role in his films were. The article establishes the different styles of characterisation Mifune could provide, showcasing him as a significant and experienced actor. It goes on to present his influence within American films, even shaping films such as Steven Spielberg’s “1941”. Toshiro Mifune had a definite influence on both Japanese films and eventually American films. He was first cast in a film by Kurosawa called “Drunken Angel” (1948), which was advantageous to both Mifune and Kurosawa as it established him as a prominent director and made Mifune an immediate star. Mifune’s American influence can be easily noticed, as it is suggested in this article that Kurosawa’s film “Hidden Fortress” (1958) starring Mifune had a large impact on George Lucas’ “Star Wars”, which is now a dominant Western picture.

Toshiro Mifune can been seen to have had a large influence on not only the film industry, but also the spectators. The article states that – “In 1984, a Japanese magazine conducted a survey to determine who its readers thought best epitomized Japanese manhood and its ideals of pride, power and virility. Their choice: Toshiro Mifune.” This captures the thoughts from the audience about Mifune, showing that his star image was positively received by the audience as they saw him as an idyllic character which encompassed every ideal. In addition, it is possible to see how influential Mifune was on filmmakers, particularly Akira Kurosawa. The article indicates that “between 1948 and 1965, Mr. Kurosawa made 17 films; all but one starred Mr. Mifune.” For an extensive period, Toshiro Mifune was seen as a leading example of a star, winning awards and starring in notable pictures throughout his career.

This is a trailer for the documentary Mifune: The Last Samurai. The film explores Mifune’s movie career, which stands a significant role in the world cinema. Mifune and film director Akira Kurosawa together had thrilled the audiences around the world with their movies, with 16 outstanding films made by Mifune and Kurosawa during the Golden Age of Japanese Cinema, including Rashomon, Seven Samurai and Yojimbo. They have also influenced film making in the film industries, providing direct inspiration for a number of significant movies, like Sergio Leone and Clint Eastwood’s A Fistful of Dollars, The Magnificent Seven and George Lucas’ Star Wars franchise.

The Redbubble page for Toshiro Mifune is useful in showing his importance not only in Japanese cinema, but also globally. The fact that years after his death a website catering to UK consumers has so much merchandise celebrating an actor who made the overwhelming majority of his films in Japanese helps us understand the impact that he has had as a star, as it is hard to think of other examples of stars from different cultures who have affected Hollywood cinema and Western culture so greatly. It is also interesting that all of the merchandise featuring Mifune directly references a specific film or character of his, such as the shirts with a picture of him as Kikuchiyo in Seven Samurai, which shows us that his star image is built around his film roles much more than his celebrity. This contrasts with many Hollywood stars such as Marilyn Monroe, who has a star image which is based more around her looks and media coverage rather than her acting. The images of Mifune show us that his star image has been built up to portray him as wise (in particular the shirt with the caption “what would Toshiro Mifune do), handsome, dangerous, and, for want of a better word, badass.

The source I have chosen to do is The Samurai Trilogy (the criterion collection), because I thought it was an interesting piece that clearly represents Toshiro Mifune’s star image in Japanese and western Cinema. It also shows how distributors used his star image, to help market samurai films internationally. Toshiro became a famous actor in the post-war period of Japanese cinema, he played in films such as Sankuru, Rashmon and Throne of Blood, however he was best known for the 16 films he made frequently with film director Akira Kurosawa. This would involve him playing roles such as samurai or ronin.

The front cover of this dvd trilogy represents Toshiro in a fighting stance as a samurai. This represent his star image because this shot is ionic throughout his films in Japanese cinema and shows how audience can best associate Toshiro with his characters. This helped market this dvd trilogy because if audiences were going to buy this piece they would know exactly who it is and what they are buying. In John Ellis’ essay ‘stars as a cinematic phenomenon ‘ he states “ The star image is a incoherent image. It shows the star both as an ordinary person and as an extraordinary person“.

This relates back to Toshiro’s star image because audiences find him relatable as he was an ordinary person e.g. someone who came into acting via a talent competition which Kurosawa was there watching. However his acting style would have been show through his movement on the screen that made him extraordinary compare to the average person, this can be quoted by Kurosawa who states “ it was, above all, the speed with which he expressed himself was astounding. The ordinary Japanese actor might need ten feet of film to get across an impression; Mifune needed only three. The speed of his movements was such that he said in a single action what took ordinary actors three separate movements to express”.

The way in which he does his movements on screen allows us to define Toshiro as a star and relating back to Kurosawa “ordinary Japanese actor might need ten feet of film to get across an impression; Mifune needed only three”. This shows that Toshiro was more adaptable therefore he could get a shot easily and with quicker duration. Overall his movements help us define Toshiro Mifune as a star and this helps when distributors were marketing him through dvd’s, tv shirts, posters etc (like the figure 1 below). The way he performs in the samurai trilogy can easily be recognisable by the cover of the dvd set and gives an insight into the genre of the films by just the overall look. I personally think Toshiro is interesting in his acting style and how he demonstrated this in his films and I enjoyed learning about him as a star as well as learning about Japanese cinema as a whole. 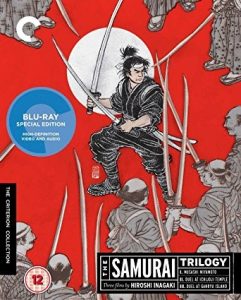 One thought on “Group B week 10: Toshiro Mifune”