Although maintaining an appreciation for early cinema and the material we have engaged with, there have been a few challenges encountered. One of which being the issue of the films lacking the element of “spectacle” they held when they were first shown. Early cinema was something new and exciting for contemporary audiences, by showing them aspects of day to day life the early films allowed new techniques which were unattainable in theatre or through mediums such as the magic lanterns to capture the imagination of the audience. 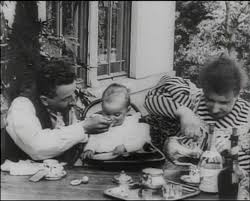 The film “Baby’s Meal” (1895) by the Lumiere brothers captured a snippet of a baby eating, the simple and short static camera video sparked the “cinema of attraction” and the desire to see more amongst audiences. As time went on films began to evolve into something more than just a novelty to the contemporary audience, Trick films shocked viewers whilst early gag films such as “The Miller and The Sweep” by George Albert Smith (1897) humoured them.

However as modern film historians we find that these films lack the conviction of the feature films we’re used to. The narratives seem weaker and the astounding cinematic effects don’t seem all that amazing, simply because we are used to better. This therefore causes problems for us as we can’t find the same entertainment contemporary audiences did when cinema was shown to them for the first time. Through our studying of the development of early cinema it becomes obvious that this could come down to a lack of  sufficient contextual knowledge. As a modern audience we may find that a pre-revolutionary film from Russia doesn’t provide the same sort of entertainment it did for the viewers it was first shown to, this therefore makes it harder for us as film historians to really understand the films and as well to really relate to something produced decades ago.

With all that being said it is undeniable that after evaluating both the 1890’s and 1910’s material we have seen developments in film that have certainly surprised us. Take the shift from the long and static camera shot shown in the short film “View From an Engine Front” (1898) by The Warwick Trading company to the varied camera angles of the film “Mary Jane’s Mishap” (1903) created by G A Smith. The cuts to medium shots instead of long shots in Smith’s film help to develop a more engaging narrative.

Something else that proved to be equally as surprising in tour study of Film History, is that Hollywood, which seems almost synonymous with the film industry in present day, was not always the dominant force in the film industry. It was instead films produced in Europe that were popular internationally. For example, the Lumiere brothers were hugely successful businessmen in the way they marketed their films which made them renowned worldwide as leaders in the film industry. However, before WW1, American firms were mostly concentrated on their domestic market. This would all change with the outbreak of WW1 as production in Europe dropped and new markets opened to the US, but it is interesting to see that, without the language barriers that a talkie would encounter, European films from countries such as France, Italy and Germany were enjoyed all over the world