At out main event Cheryl Morgan will talk about trans women in the ancient world. 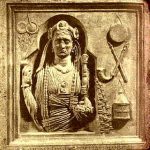 Media coverage of trans people often states that we are a recent invention, perhaps dating only from 1930s Germany. The reality is much more complicated. People have been living lives outside of the gender binary for all of human history. Indeed, in the past societies were often more open to different genders than they are now.

In the ancient world, living outside of the gender binary was often closely associated with religion. Certain goddesses took an interest in gender and made space for those assigned male at birth to become priestesses and live as women, or at least not as men. Sometimes this involved early forms of gender surgery. 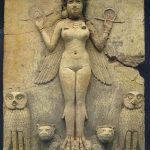 In this talk Cheryl Morgan will look at evidence for gender variance in Goddess worship from Sumer through Assyria and Babylon to Rome. The talk will include the world’s first known author, non-binary people from Sumerian mythology, a tavern owner who became a queen and perhaps a goddess, an emperor who identified as female, the earliest known trans woman in Britain, and some early examples of legal discrimination against trans people.

What role did Claudius play in trans emancipation in Rome, and why did Hadrian sabotage this? We may never know what their motivations were, but it is clear from the laws they passed that LGBT+ rights were an issue for Romans just as they are today.

Cheryl Morgan is a science fiction critic and publisher. She is a Co-Chair of OutStories Bristol and lectures regularly on both trans history and science fiction and fantasy literature. Some of her work can be found on Academia.edu. Cheryl is a regular presenter of the Women’s Outlook show on Ujima Radio in Bristol. She is a Director of The Diversity Trust for whom she run trans awareness courses. You can find her online at www.cheryl-morgan.com or follow her on Twitter @CherylMorgan.