The latest research project in theology to begin here at the University of Exeter focuses on exploring how ethnicity, race, and religion were understood by Jews and Christians at the time of Christian origins. To find out more about the project aims and the contemporary relevance of the research, I spoke to project leader Professor David Horrell who shared his inspiration for the project and revealed what we can expect from the upcoming conference.

Ethnicity, race, and religion are complex components of identity, and their relationship is set to be explored in a new research project taking place at the University of Exeter. “I’m mainly interested in exploring how supposedly ‘ethnic’ aspects of identity feature in both Jewish and Christian texts,” explains Professor David Horrell, “and exploring the practices and beliefs the texts depict.” A further aim of the research seeks to examine how Christian and Jewish identity has been represented in contemporary scholarly works. “The second major aim is critically to probe the traditions of modern New Testament scholarship, particularly in terms of how it depicts the character of the Christian movement in contrast to its depictions of Jewish identity in the same period.” 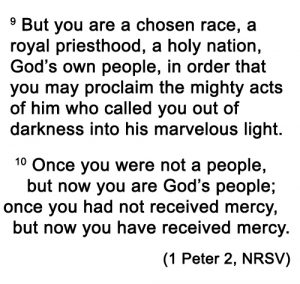 The idea for the project stemmed from a study of 1 Peter, when David began to look at the specific language used in the text to describe Christian identity. “I became interested in this topic initially through a study of 1 Peter 2.9-10, thinking about the ways in which (Jewish) ethnic identity-descriptors were there being applied to the ‘Christian’ people – precisely by labelling them as a ‘people’, a ‘race’ and , a ‘nation’.”  Similar research by other scholars has also influenced the project. “I was inspired and informed by some recent research, especially by Denise Kimber Buell, which has begun to explore the ways in which early Christian discourse uses ‘ethnic reasoning’ to express group-identity, both to distinguish Christians from others and also to encourage others to join this new people.”

As the project focuses on the time of Christian origins it primarily explores New Testament texts – especially the letters of Paul and 1 Peter. Other early Christian texts within and beyond the New Testament will also be considered, as well as Jewish texts from the same time period such as the writings of Josephus and Philo.
But contemporary issues related to ethnic and religious identities will not go unacknowledged, and I think it is the present day relevance of the research which makes the project so interesting. As David explains, “’religion’ and ‘race’ or ’ethnicity’ are clearly bound up in some of the most intractable and prominent conflicts in the contemporary world.” We need not look far for an example. “When David Cameron speaks of British values as those of freedom and tolerance, but also insists that we should be proud that Britain is a Christian country, this illustrates the overlaps and the problems: how are those of other faiths to feel fully British if the national identity is, in a sense, Christian?”

These modern implications form a central part of the research, and their consideration raises further important questions. “Are Islamophobia and antisemitism forms of religious or racial prejudice – or are they forms of hostility and fear in which both coalesce in certain ways? More broadly, why is it that people frequently draw an ideological division between Islam and the West, which correlates both to a religious and a racial division between “white” and “Arab”?”

Whilst reflecting upon these broader aspects of the project David began to notice interesting overlaps between Western ideals and Biblical interpretation. “I was struck by the significant parallel between the kind of model of inclusion that modern scholars find in early Christianity and the modern, Western, liberal model of tolerant social inclusion – both are problematic, interconnected, and reflect their racial and religious origins in the white, modern West.” 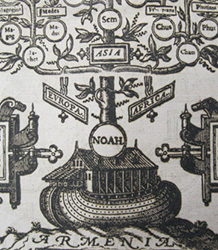 This realisation encouraged David to explore further the dominance that Western scholarly traditions continue to hold over Biblical studies. One of the crucial ways the project will do this is through a three day conference to be held on 9th-11th August. Ethnicity, Race, and Religion: Identities, Ideologies, and Intersections in Biblical Texts and Interpretation  will bring together a range of voices from both within and beyond Western scholarship. “I have invited plenary speakers who represent different perspectives, experiences, and areas of expertise outside of these Western contexts,” David tells us, “and I hope that by listening hard, my own presuppositions and approaches will be challenged and widened.”

As well as these engaging plenary talks, the conference also promises to showcase related research from across many of the sub-disciplines in theology. “We have a wide range of papers offered by people from around the world, dealing with topics ranging from the constructions of Jewish and Gentile ethnicity in Paul’s letters, to Contextual Bible Study and other ways of bringing non-Western voices and interpretations to expression. It should be an exciting and engaging event!” 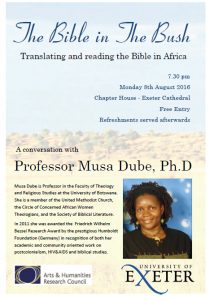 The conference also brings an opportunity for some of these topics to be discussed in
front of a wider audience. On Monday 8th August a public lecture has been arranged with Professor Musa Dube, who will be speaking on The Bible in the Bush: Translating and reading the Bible in Africa. The event is open to all and begins at 7.30 pm in Chapter House on Exeter Cathedral grounds.

It certainly looks  to be an eventful few months for the project – we look forward to the conference and to seeing the results of this exciting research as it emerges!

‘Ethnicity, Race, and Religion in Early Christian and Jewish Identities,’ is an AHRC funded project set to run until March 2017. To find out more about the ongoing research, visit the project webpage.

We are delighted to announce that Professor Musa Dube from the University of Botswana will be presenting a talk at Chapter House, Exeter Cathedral, on Monday 8th August at 7.30pm.

‘The Bible in the Bush: Translating and Reading the Bible in Africa’ will introduce and explore some of the themes which arise from biblical interpretation in African contexts. 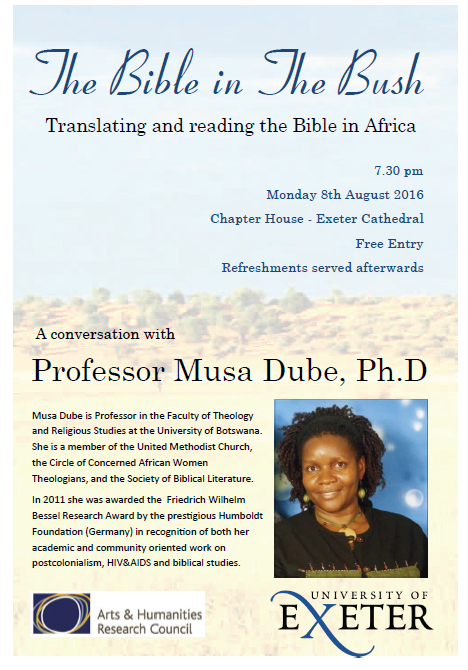 Professor Musa Dube is currently Professor in the Faculty of Theology and Religious Studies at the University of Botswana. She is a member of the United Methodist Church, the Circle of Concerned African Women Theologians, and the Society of Biblical Literature. Her research focuses on postcolonial and feminist readings of the Bible, theological issues surrounding HIV and AIDS, and translations and interpretations of the Bible in Africa.

In 2011 she was awarded the Friedrich Wilhelm Bessel Research Award by the prestigious Humboldt Foundation (Germany) in recognition of both her academic and community oriented work on postcolonialism, HIV&AIDS and biblical studies.

Her expertise is guaranteed to make this an insightful and engaging talk, both for those with prior knowledge of the subject matter as well as those new to the topic.

Entry to the event is free, and all are welcome. Refreshments will be served afterwards.

‘The Bible in the Bush: Translating and Reading the Bible in Africa’ takes places at Chapter House, Exeter Cathedral, on Monday 8th August 2016 at 7.30 pm. Free entry.

Directions: Chapter House is located to the right of the Cathedral’s main entrance, through the small garden with black railings.

On Monday 13th June the department came together for the end of term Theology and Religion Postgraduate Study Day, hosted at the university’s Catholic Chaplaincy. This event offered the chance for MA and PhD students to share their research in front of students and staff.

In the first session, we heard from Leanna Rierson and Giovanni Hermanin De Reichenfeld. Leanna Rierson spoke about “The Emergence of Humility in Contemporary Leadership Theories and the Potential Application to Biblical Studies.” Her aim is to combine leadership theories, humility studies, and Biblical Studies in order to better understand leadership in both the ancient world and in contemporary culture. The approach she proposed involves using case-studies to investigate Paul’s humility and how this contributed to his effectiveness as a leader. Giovanni Hermanin De Reichenfeld gave a paper titled “The Material of the Gifts from God: is the Spirit a Creature in Origen’s Commentary on the Gospel of John?” His discussion of whether Origen considered the spirit to be part of creation revealed Origen’s multi-layered understanding of the Holy Trinity and how each of its aspects came into being. I was the chair for the session, and though I was nervous because I had not chaired before, it was made easier by the well-timed speakers and enthusiastic questions from the audience.

END_OF_DOCUMENT_TOKEN_TO_BE_REPLACED

The Futures of Biblical Studies
University of Kent, 1-2 June 2016

This conference was the opening event for the newly formed Institut 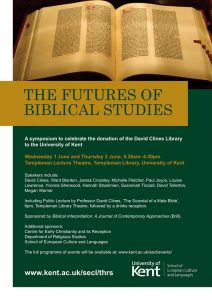 e for Biblical Studies comprising the universities of Exeter, Kent, Sheffield and St Mary’s Twickenham. It also celebrated the launch of a new biblical studies library at the University of Kent, donated from the personal collections of David Clines who also provided us with the key note lecture. I was extremely excited to be presenting a paper at my first ‘proper’ conference – in the sense that previous paper presentations have been at post-graduate events. Sharing your work in a room of leading scholars in one’s own discipline is an altogether different experience to presenting to fellow students from the very broad umbrella of humanities. So whilst I was nervous, I was also excited to be a part of both the ‘real’ world of biblical scholarship and also excited to be a part of the ‘future’ of this discipline.