Home » Uncategorized » ‘Darkness that might be felt’: A Black Woman in Imperial Russia

‘Darkness that might be felt’: A Black Woman in Imperial Russia

Black History is widely disputed; sometimes, even the most canonical narratives of Black lives are challenged and critiqued. The autobiographical Narrative of the great abolitionist campaigner Frederick Douglass has been contested by some historians for not going far enough in its condemnation of the American state for tolerating slavery; the life story of the poet (and freed slave) Phyllis Wheatley was appropriated and re-told by a white woman fifty years after Phyllis’ death. Yet other historically important Black life stories are not even read today, let alone critiqued. Nancy Prince, although less well-known today than Douglass or Wheatley, told her astonishing life story in her own words while opening a window onto St Petersburg, the capital of the Russian Empire in the nineteenth century. Her Narrative of the Life and Travels of Mrs Nancy Prince (1850) is still fresh and relevant today, as a page from Black history and as an unexpected view upon Russian history and culture. Extraordinarily, this uneducated Black woman from Massachusetts lived in Russia for nine years (and six months) between 1824 and 1833. She knew two Russian Tsars, or Emperors, and their wives personally. Later in life, after her husband’s death, Nancy travelled in Jamaica, then became a teacher in her native New England, finally writing her memoirs in order to share her inspiring experience and keep food on her table. 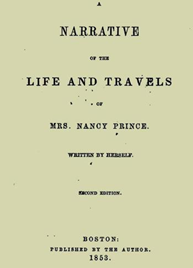 Almost two hundred years ago, Nancy Gardner Prince arrived in St Petersburg with her husband, Nero Prince. Nancy was born free in Newburyport, Massachusetts, in 1799, making her the same age as the poet Aleksandr Pushkin. Since her family was poor, she spent her young adulthood – after her stepfather’s death – doing menial work to support her mother and six younger siblings. Nero had been born in Marlborough, in England; he signed on with a merchant seaman and visited America and Russia several times. A Russian noblewoman hired him as a servant; later, he was given a role on the staff of the Tsar in St Petersburg. This was why Nero returned to the city in 1824, bringing Nancy. His new wife reported her first meeting with his employers at one of the Imperial palaces:

As we passed through the beautiful hall, a door was opened by two colored men in official dress. The Emperor Alexander stood on his throne, in his royal apparel. The throne is circular, elevated two steps from the floor, and covered with scarlet velvet, tasseled with gold; as I entered, the Emperor stepped forward with great politeness and condescension, and welcomed me, and asked several questions; he then accompanied us to the Empress Elizabeth; she stood in her dignity, and received me in the same manner the Emperor had. They presented me with a watch, &c.

Nancy notes: ‘there was no prejudice against color’. Later she describes Russian social conditions in the countryside: ‘The village houses are built of logs corked with oakum, where the peasants reside. This class of people till the land, most of them are slaves and are very degraded. The rich own the poor, but they are not suffered to separate families or sell them off the soil. All are subject to the Emperor, and no nobleman can leave without his permission’. It’s hard not to read comments such as these as implicit critiques of slavery back home in America, where families were routinely separated (like the infant Frederick Douglass from his mother) or sold on to distant farms.

Nancy’s stay in Russia was not all about critical race theory, however. She also gives us enthralling spectator portraits of two major historical events: the Decembrist rebellion of 1825, when a group of liberal Russian officers refused to accept the inauguration of the new Tsar, Nikolai I. In December 1825, they protested in Senate Square, St Petersburg, in favour of the Tsar’s brother, Konstantin; they also demanded a constitutional monarchy and an end to the practice of owning workers and peasants as ‘serfs’ (more soon on the difference between serfs and slaves). Their rebellion was firmly put down within a day, and the ringleaders and their families were executed or sent into Siberian exile. Nancy describes the excitement of that long December afternoon of insurrection, although she gets some details wrong (the Decembrists’ wives were not flogged, and no-one was burned on the scaffold). Even more vivid is her account of surviving the great St Petersburg flood of 1824, when the River Neva burst its banks, drowning an estimated 700 people, mostly in the poorer parts of the city where houses were flimsier (although the whole city was submerged as the waters rose by almost four metres). Most students of Russian learn about this flood when they read (in Russian or English) Aleksandr Pushkin’s famous 1833 poem The Bronze Horseman, in which his hero Evgenii survives by clinging to a stone lion (Evgenii’s fiancée is not so fortunate). Pushkin was not an eyewitness to the catastrophe, but Nancy was. Here is her story:

The morning of this day was fair; there was a high wind. Mr Prince went early to the palace, as it was his turn to serve; our children boarders were gone to school; our servant had gone of an errand. I heard a cry, and to my astonishment, when I looked out to see what was the matter, the waters covered the earth. I had not then learned the language, but I beckoned to the people to come in. The waters continued to rise until 10 o’clock, A.M. The waters were then within two inches of my window, when they ebbed and went out as fast as they had come in, leaving to our view a dreadful sight. The people who came into my house for their safety retired, and I was left alone. At four o’clock in the afternoon, there was darkness that might be felt, such as I had never experienced before. [At 10pm that day…] I then took a lantern, and started to go to a neighbor’s […]. I made my way through a long yard, over the bodies of men and beasts, and when opposite their gate I sunk; I made one grasp, and the earth gave away; I grasped again, and fortunately got hold of the leg of a horse, that had been drowned. I drew myself up, covered with mire, and made my way a little further, when I was knocked down by striking against a boat, that had been washed up and left by the retiring waters; and as I had lost my lantern, I was obliged to grope my way as I could, and feeling along the wall, I at last found the door that I aimed at. […The next day] I went to view the pit into which I had sunk. It was large enough to hold a dozen like myself, where the earth had caved in. Had not the horse been there, I should never again have seen the light of day, and no one would have known my fate. Thus through the providence of God, I escaped from the flood and the pit. 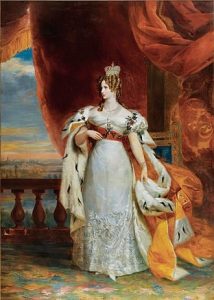 (The poet Pushkin was also Black; you can read more about his heritage here.) Although Nancy had developed a thriving business as a childminder and as a seamstress of high-quality baby linen (the TotsBots of her day, one might imagine – even Empress Aleksandra Federovna (left) ordered Nancy’s layettes for the little Grand Dukes and Duchesses), she couldn’t adjust to the cold, damp northern climate. She decided to leave St Petersburg and Russia for good in August 1833; by October, she was back in Boston. Her husband planned to remain another two years ‘to accumulate a little property […] but death took him away’. Nancy never married again or had children of her own, but her own extraordinary life and her social history of Russia and other nations keeps her memory alive. You can read more about her life here.

Arguably, Nancy oversimplified the similarity between Black slaves in America and Russian serfs. Their legal status was different: both were chattels (owned by other people), but serfs, unlike slaves, had legal status. They were responsible under the law for their own behaviour; they could (in some cases) sign contracts; and they even paid taxes.* Slavery was abolished in Russia under Tsar Peter I (the Great) in the 1720s, but at the same time serfs’ legal rights (including freedom of movement) became much more restricted. By the mid-nineteenth century, there were 22 million serfs in Russian – more than one-third of the population. (Compare the slave population of 3,953,762 in the US estimated by the 1860 census.) Tsar Aleksandr II finally abolished serfdom in 1861, but peasants continued to be economically disadvantaged (with heavy debts to their former owners) and some peasants were even (until 1907) legally obliged to remain on the farms where they had been born. Contrast President Lincoln’s Emancipation Proclamation of 1863, and the Thirteenth Amendment in 1865 which formally ended all slavery in America. As with Russia’s serfs, however, official and unofficial restrictions on the lives and legal rights of former slaves lingered on perniciously. Clearly, there was enough shared experience – and shared injustice – between American slaves and Russian serfs to make the Russian ruling classes uncomfortable, despite the lack of ‘prejudice against color’ that Nancy noted. America abolitionism was a political issue in the Russian Empire because the potential emancipation of one oppressed group would signal that the serfs, too, needed to be freed. This was, as John MacKay argues, probably why Harriet Beecher Stowe’s 1852 novel Uncle Tom’s Cabin was so hotly discussed by Russian writers and intellectuals throughout that decade, and also why a Russian translation failed to appear until 1857 – much later than translations into other European languages (including Hungarian).** Like Nancy Prince, the Russian censors considered the parallels between slavery and serfdom to be too close for comfort.

In today’s Russia, a young female novelist called Evgeniia Nekrasova is writing a novel called Kozha (Skin). She is 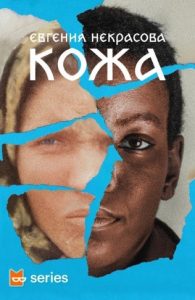 publishing the book in serial instalments, just as many nineteenth-century novelists, except that her book is appearing online – you have to subscribe to the BookMate platform to read her it. Nekrasova’s Skin tells the story of a young female Black slave, Hope, and a female serf called Domna, whose paths cross in nineteenth-century Russia. The two women discover that they can ‘exchange skins’ – to find out what that means, you’ll have to sign up to BookMate. As a white Russian woman, Nekrasova is aware that her novel might appear exploitative or ignorant; she insists, however, that ‘literature by Black women seems much closer to me, as a Russian-speaking female reader and writer, than 97% of all Russian literature’. According to Nekrasova, the collective female experience of oppression in patriarchal society gives her insight into the collective history of slavery – reading Toni Morrison’s Beloved inspired her to write about a Black slave. Nekrasova also studied Nancy Prince’s Narrative to inform Hope’s impressions of Tsarist Russia. Whether or not Nekrasova’s novel is successful, no doubt Nancy Prince would be happy that she is still inspiring Russians to think in creative, intersectional ways about Black history – and about their own…

*For more on the differences between (and co-existence of) slavery and serfdom in Russia, see Ralph Hellie, ‘Slavery and Serfdom in Russia’, in A Companion to Russian History, ed. by Abbott Gleason (Blackwell, 2009), pp. 105-20.

← Students Re-Imagine Baudelaire: Through the Window and Into the Clouds Ladj Ly responding to Victor Hugo →