This phase will focus on the application of CFD to predict hydrodynamic effects of debris blockage for a broad range of bridges. We will evaluate computationally the two main hydrodynamic effects on a bridge, namely scour and pressures. Two distinct approaches to modelling scour will be investigated and later compared for their effectiveness.  Results from the flume experiments in Phase 1 will be used to test and validate the CFD models. Accuracy and computational costs of the two distinct approaches for scour prediction and modelling will be assessed to determine the most suitable approach for the next stage of the project.

Scour depths will be empirically related to flow velocities near piers or abutments based on results from the scour modelling approach identified as the most suitable for scour prediction. We will then use full scale CFD simulations to predict debris effects for a diverse set of debris and bridge scenarios. This research will is interested in mainly evaluating the interactions between model parameters such as bridge span and pier width that largely determine the two quantities of interest – flow velocities and pressures. Results from the CFD models, which will include flow velocities around piers and abutments, and pressure distributions on the bridge superstructure, will be compiled for use in Phase 3.

In the following results from a sample CFD simulation (using OpenFOAM) is shown. 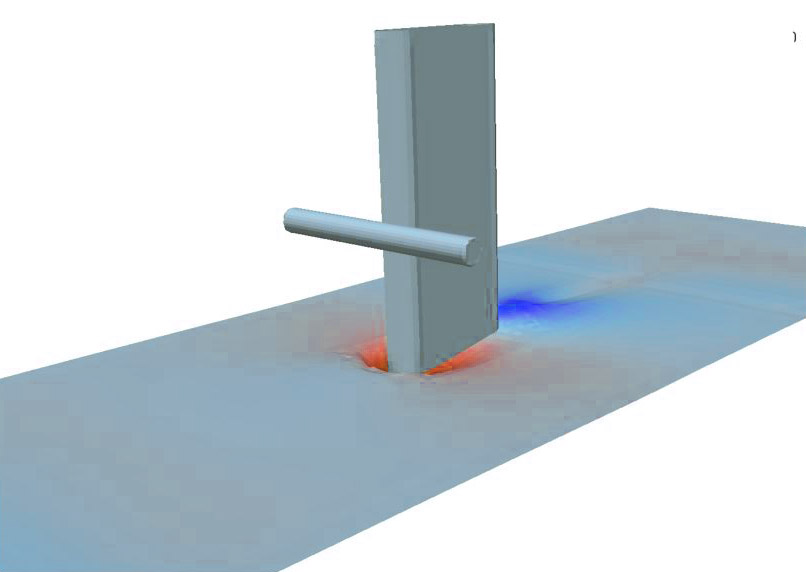 In the following simulated scour maps for a two-span arch bridge is shown. 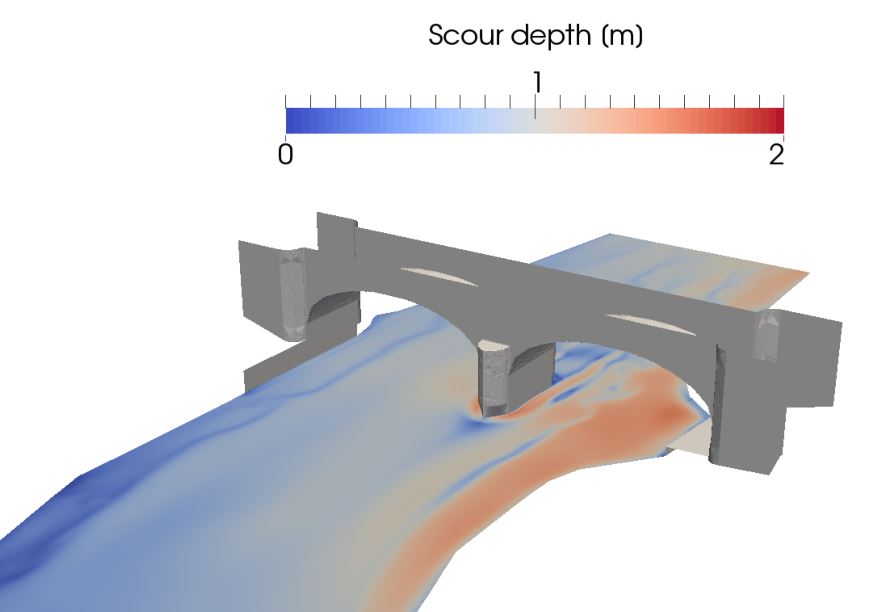 And a looking upstream view of flow streamlines: 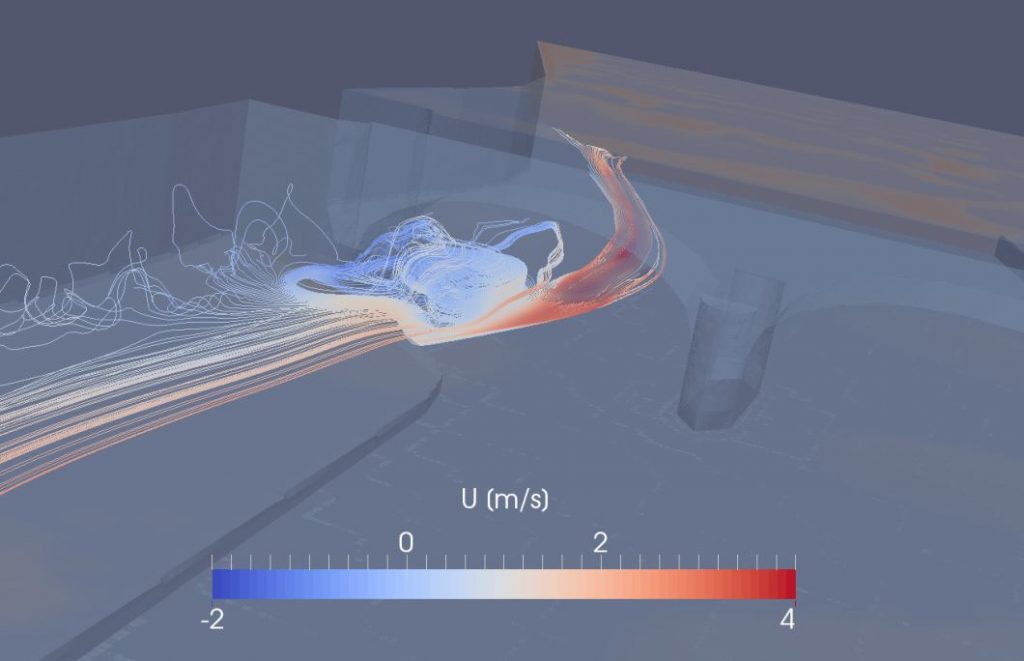 The 4th Steering Committee Meeting was held on the 12th of June 2017 at the University of Exeter.

Recent devlopments in experimental modelling (e.g. velocity measurements, effect of debris elevation on scour depth at a pier, and scour protection by riprap) and CFD modelling (model validation and 12th OpenFOAM Workshop at the University of Exeter) were discussed. This was followed by a discussion on the results.

The 3rd Steering Committee Meeting was held on the 11th of November 2016 at the University of Exeter.

An overview of the project and work plan was presented. Preliminary experimental results were presented and discussed. Experimental improvements were also demonstrated in a lab tour.

After the lunch, a presentation on use of OpenFOAM for CFD simulations was done and future plans were shared with the Committee. This was followed by a discussion on the preliminary results and work challenges.

RAMB project is funded by EPSRC as shown in here. It is aimed at studying hydrodynamics and scour around masonry bridges due to debris blockage, which has been identified as a major cause of bridge failure during flooding. Debris can reduce conveyance capacity, enhance scour and increase hydrodynamic forces, which in turn may detrimentally affect bridge stability even under moderate flow rates. Debris build-up can occur around any obstruction to water flow such as bridge piers. Masonry bridges, which constitute over 40% of the nation’s bridge stock, are particularly susceptible to debris blockage due to their short spans and low clearances over water levels. While hydrodynamic effects due to debris are known to significantly heighten the chances of bridge failure by worsening pier scour and constricting flow, current guidance for design and assessment of bridges are highly inadequate for evaluating effect of debris on scour and also hydrodynamic loading at bridges.

This research will directly address this urgent and practical need for an approach to evaluate the risks from debris accumulation at bridges. It will investigate the scour-enhancing effects of debris accumulation in the watercourse, and devise a systematic methodology to assess scour enhancing effect of debris blockage on bridge piers. The methodology, which will be built into existing CIRIA guidance [1] for assessment of bridges under hydraulic action, will enable optimal planning of interventions to effectively target bridges at risk to debris blockage and thereby improve resilience of the transport network and the rate of post-flood recovery. RAMB project also investigate hydrodynamic pressures at arch bridges which can be of practical importance for maintenance of masonry arch bridges.

This research comprises of the following three key elements

The 1st Steering Committee Meeting was held on the 3rd of July 2015 at the University of Exeter. This was a joint meeting between the industry consortium and the research team.

The meeting was started with individual introductions, followed by presentations on overall goals of the project and experimental phase of the project. Afterwards, comments were exchanged among attendees on various aspects that need to be considered in experimental modelling so as to represent important prototype conditions. This was followed by expressing expectations of both industry consortium and research team from the project.

Finally, some actions were defined to be taken by research team, including obtaining prototype conditions from practitioners, scheduling field trips, preparing and circulating fact sheets at different stages of the project, and setting up project blog. 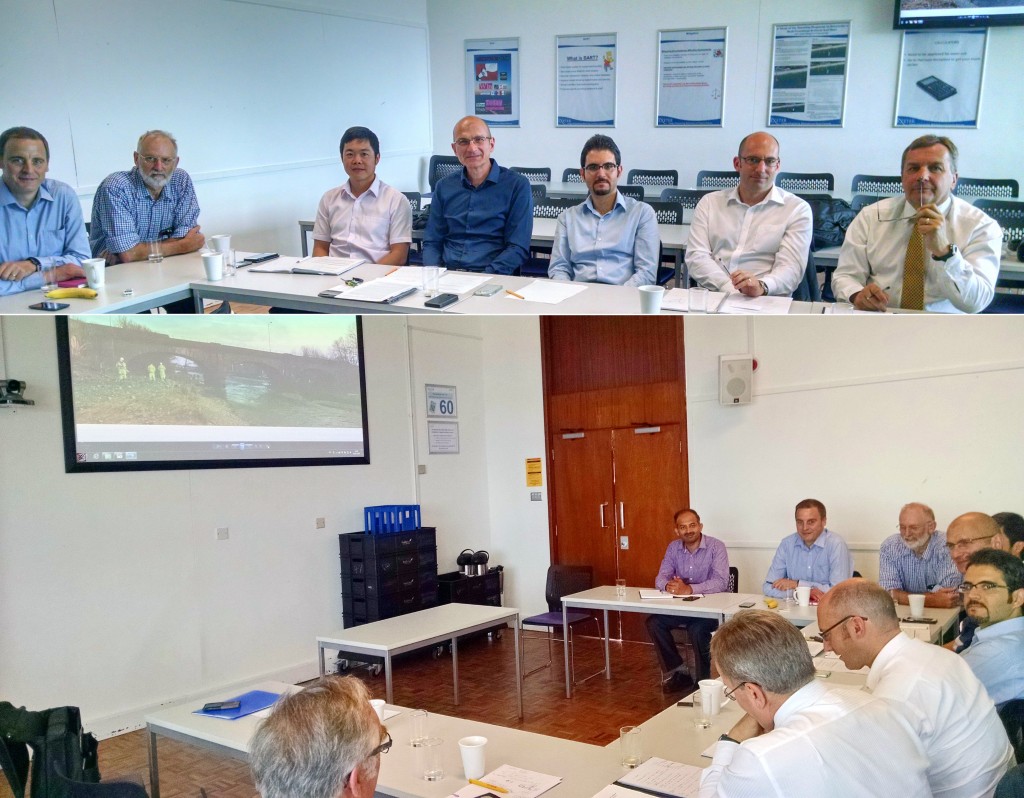