The next Screen Talks event will be on Monday 8th April, 6.30 pm at Exeter Picturehouse. Dr Jennifer Barnes will introduce Richard III (Laurence Olivier, 1955). Join the event on Facebook and find out more here.

Booking Information:  Book online, call the Box Office 0871 902 5730 or buy tickets on the door (half price for students on Mondays).

Dr Jennifer Barnes has written a guest blog post for us, outlining Laurence Olivier’s contribution as director and star and the film’s place in British national culture of the 1950s:

Richard III (1955) is the third and final Shakespearean feature film in which Laurence Olivier (1907-1989) both starred and directed. It follows the patriotic Henry V in 1944 and the internationally renowned Hamlet in 1948. There is much of interest in the film for those interested in Olivier as an actor-director, for those fascinated with Shakespeare on screen, and for those intrigued by the ways in which Shakespeare is adapted to speak to different cultural moments. 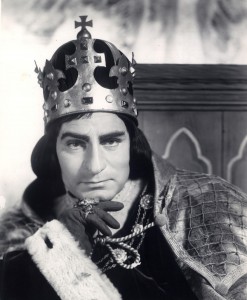 To watch Richard III is to be immersed in the national culture of 1950s Britain following the Coronation of Queen Elizabeth II. With its emphasis on colour, spectacle and monarchical imagery, Richard III continually looks back to the Coronation of 1953 and the film offers an extravagant celebration of Britain’s national past and present. Showcasing Richard as the ultimate hero-villain and a “legend of the crown of England,” Olivier’s screen adaptation of Shakespeare’s play revels in a glorification of the national image and of the high cultural values associated with Britain’s national poet. Remembering Britain’s theatrical past through the cinematic present, Richard III draws an explicit parallel between the so-called Golden Age of Elizabeth I and the new Elizabethan age, a parallel that is further cemented by the way in which Richard III continually cites the Technicolor documentary film of Elizabeth’s Coronation, A Queen is Crowned. As the distribution poster announces, the instantly recognisable voice of Laurence Olivier narrates A Queen is Crowned and the mood of national celebration and renewal that it captures is evoked throughout Richard III. Accordingly, the film begins not with Richard’s famous opening soliloquy (“Now is the winter of our discontent…”) but with a fantastic Technicolor Coronation. 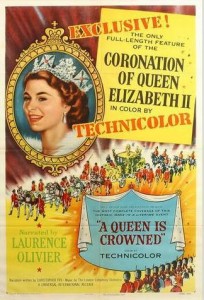 My research into the background of the project reveals that Richard III was designed as a prestige production, one that was intended to shore up the reputation of the beleaguered British film industry at home and abroad. Conceived of as a project of both national and international importance, it became the first feature film to be premiered on US television simultaneously with its release in cinemas, reaching an audience of millions. With this in mind it is perhaps no surprise that Olivier’s performance as Richard III is so clearly embedded in cultural memory. The apparently indelible mark left on the role by Olivier has informed incarnations of Shakespeare’s Richard ever since. Anthony Sher, struggling to come to terms with the ghost of Olivier’s Richard whilst preparing to play the part himself, described Olivier’s delivery in the 1955 film as “imprinted on those words like teeth marks.”

Richard III certainly represented an important milestone in Olivier’s career. Six months before the film’s premiere in London, critic John Barber wrote a particularly vituperative article for the Daily Express that accused Olivier of preferring Hollywood to Britain and privileging the screen over the stage. Olivier, said Barber, had “lost his way.” Barber must have particularly enjoyed Richard III. The film presents Laurence Olivier at the helm of a British performance tradition that encompasses other famous actors celebrated for their performances as Shakespeare’s “bottled spider.” Indeed, Richard III includes, amongst others, references to Richard Burbage (1567-1619), Edmund Kean (1787-1833) and Henry Irving (1838-1905). When, in the opening scene, we watch Olivier’s Richard slowly lower a coronet onto his head, we are watching Olivier reassuming what the Financial Times described in 1955 as “that crown of heroic British acting which is his by rights.”

The next Screen Talks event will be on Monday 25th March, 6.30 pm. Dr Danielle Hipkins will introduce Rocco and His Brothers (Luchino Visconti, 1960). Join the event on Facebook and find out more here.

Dr Danielle Hipkins has written a guest blog post for us, outlining the importance of Rocco and His Brothers as a key film exploring issues of migration and identity at a key moment in Italy’s post-war transformation: 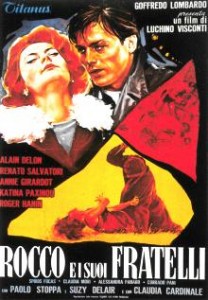 Although contemporary Italy may be plagued by economic and political crisis, in the late 1950s the country saw the beginning of a period of development so dramatic that it was labelled an ‘economic miracle’. This era transformed Italy from a predominantly agricultural country into an industrialized one. One of the main motors of this transformation was the steady supply of low-wage labour from the impoverished, agricultural south; between 1958 and1963 more than 900,000 southerners moved to northern Italy. Those moving from this underdeveloped area, still bound by feudal and religious tradition, into a consumer-oriented, individualist, and rapidly modernizing urban environment felt as though they had moved to a foreign country, and were often treated dismissively.

Rocco and His Brothers is the epic story of one such family of migrants, five brothers and their mother, who seek their fortune in Milan after the death of their father. There is perhaps no Italian film that narrates more powerfully the personal costs of migration: the hardships of surviving in a hostile environment and adapting to an unfamiliar set of cultural codes. This family melodrama draws out engaging performances from Alain Delon, Annie Girardot, and Renato Salvatori, locked in a love triangle that comes to dominate the film, as two of the brothers fall for the same woman. The film’s strength lies in the powerful emotional response that change elicits in the stories of Rocco and Simone, who find it most difficult to adapt, to accept changing social codes, and to let go of family loyalties and nostalgia for a lost world. 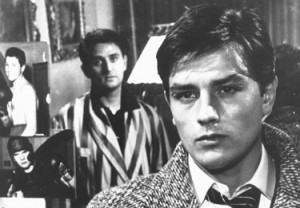 In my research in the Visconti archive in Rome I discovered how Visconti’s directorial approach to an ‘anthropomorphic’ cinema – a cinema that puts the individual drama at its heart led to sympathetic role for a woman that he did not originally anticipate. Thanks also to input from a female scriptwriter, Suso Cecchi d’Amico, and the lead actress herself, the character of the prostitute Nadia, who seduces one brother, but falls for another, developed beyond her original sketchy symbolization as figure of urban evil. Central to the film’s final shape, she complicates the Marxist ambitions that structure the film and reminds us that changing roles for men and women lie at the heart of the brothers’ problems.

1960 was a boom year for Italian cinema, producing La dolce vita (Federico Fellini) and L’avventura (Michelangelo Antonioni). However, whilst those two films explore the lives of Italy’s rich elite and their ennui, Visconti blended his fascination with opera and Communism into a powerful, melodramatic exploration of what it means to be at the sharp end of the economic scale, to be caught between two radically different cultures. Visconti’s daring use of real locations to screen sex, violence, and unpalatable truths about the foundations of Italy’s boom invoked the wrath of the censors, but contributed to creating an emotional narrative for a forgotten class. Visconti tells an unforgettable tale of what and who gets lost in the need to adapt and to survive in the modern urban environment.

Dr Danielle Hipkins is a Senior Lecturer in Italian in the Dept of Modern Languages, College of Humanities, University of Exeter.  Read more about Danielle’s work here.