The next Screen Talks event will be on Monday 3rd June at Exeter Picturehouse. Alanna Skuse (Centre for Medical History and Dept of English, University of Exeter) will introduce 50/50 (Jonathan Levine, 2011).

Booking Information: Book online in the week leading up to the film, call the Box Office 0871 902 5730 or buy tickets on the door (half price for students on Mondays).

Alanna Skuse has written a guest blog-post for us on the language that surrounds cancer and its history:

On 3rd June I will be introducing 50/50, a movie that tells the story of a young man diagnosed with a rare form of cancer, and his experience of that disease. In many ways, however, this film is less about cancer in a clinical sense and more about people’s reactions to it, and how being a cancer patient can alter your life in more than the obvious ways. In this blog post, I want to think about the persistence of some particular ways of thinking about cancer by comparing modern rhetoric around the disease with that found in texts dealing with cancer in the seventeenth century.

Only a few weeks ago, Cancer Research UK released a new fundraising appeal, across a number of different media. The slogan is ‘Oi cancer’. In the TV advertisement, people ‘tell’ cancer, “I’m not afraid of you” or “I’m coming to get you”. The website, www.oicancer.org, invites us to contribute our own ‘message to cancer’. Cancer Research’s advertising strategy is interesting because it locates a relationship with cancer that is quite different to that we have with any other disease. In the UK, heart disease and Chronic Obstructive Pulmonary Disease account for a similar number of years of life lost as breast of lung cancer.[1] Would a campaign which asserted “we’re coming to get you, COPD” be as effective? Almost certainly not, because despite the fact that it is, crudely speaking, a disease of our own mutated cells, we imagine cancer as something other; a disease which is in some way wilfully hostile to the body. That seeming agency is what makes cancer a disease that can be, even if only in rhetorical terms, ‘sent a message’.

This illusion may seem like a modern phenomenon, of the same order as claims that ‘positive thinking’ can diminish tumours. In reality, however, it is a pattern of thought that has persisted for hundreds of years. The very word ‘cancer’ comes from an ancient Greek term, karkinos, or crab. Medical practitioners in the early modern period took it as obvious that cancerous tumours were named after this creature because they were round and red, like a crab, with darkened veins surrounding the tumour which looked like legs. In addition, they noted that ‘the tumour is so rooted in the Glands of the Breast, that ’tis no more possible to extirpate it, than force a Crab to quit what he has grasped betwixt his griping Claws’.[2] 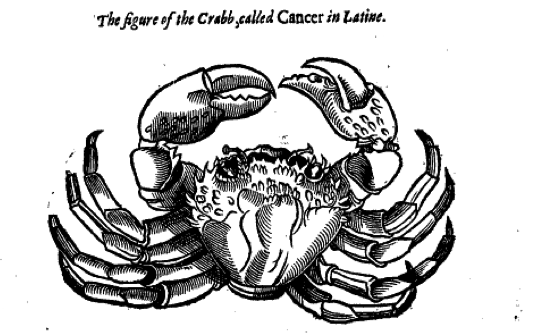 Furthermore, many physicians saw cancerous tumours increasing as the patient visibly diminished and came to the natural conclusion that the disease was literally ‘eating’ the body. From the medieval period to the eighteenth century, practitioners of various kinds claimed to have seen worms in cancerous ulcers. In 1714, one ‘empiric’, or unlicensed practitioner, even claimed to have seen a wolf poking its head out from a cancerous ulcer.[3] So invested were early modern physicians and their audiences in the idea of cancer as purposefully intractable that the very word ‘malignant’ meant more than simply ‘prone to spread’. ‘Malignant’ encapsulated a whole range of qualities including resistance to cure, painfulness and the ability to ‘break out’ into painful ulcers. More than a clinical term, this was evidence of cancer’s ‘evil’ nature.

In the twenty-first century, most of us agree that the idea of cancer as an independent, hostile entity within the body is a rhetorical one, psychologically useful rather than literally true. In the language of ‘battling’, ‘fighting’, or saying ‘Oi’ to cancer, however, we can see that historical influences on our conceptualisation of this disease are far from extinct.

[2] Pierre Dionis, A course of chirurgical operations, demonstrated in the Royal Garden at Paris (London: 1710), p.248.

The next Screen Talks event will be on Monday 20th May at Exeter Picturehouse. Dr Sinead Moynihan  (Lecturer in American Culture, Dept of English) at the University of Exeter) will introduce The Great Gatsby (Baz Luhrmann, 2013)

Dr Sinead Moynihan has written a guest blog-post for us on Baz Luhrmann’s film version of Scott Fitzgerald’s novel, and how it deals with questions of identity: 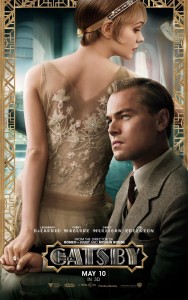 On 20th May, I will be discussing the latest adaptation of F. Scott Fitzgerald’s The Great Gatsby (1925), one of the most widely-read and taught novels of the twentieth century.  I will be mainly concerned with three interrelated issues 1) the challenges of adaptation generally 2) the specific challenges of adapting Fitzgerald’s novel for the screen and 3) how we might think about this most recent adaptation in relation to earlier adaptations of the work, notably the 1974 version featuring Robert Redford as Jay Gatsby and Mia Farrow as Daisy Buchanan.

For this blog, I’d like to discuss briefly my own interests in the novel, which relate to the particular historical context in which it was written.  I have an article forthcoming in African American Review on the relationship of the novel to a subsequent novella, Passing (1929), by an African American writer, Nella Larsen.  As such, my article contributes to a relatively recent body of work which contextualises The Great Gatsby in relation to debates on immigration, race and ethnicity contemporaneous with the publication of the novel. Critics have pointed out, for example, the significance of the fact that the novel appeared just a year after the passage of the Johnson-Reed Immigration Act of 1924.  As the U.S. State Department tells us, this Act “limited the number of immigrants allowed entry into the United States through a national origins quota.  The quota provided immigration visas to two percent of the total number of people of each nationality in the United States as of the 1890 national census. It completely excluded immigrants from Asia.”  In other words, Gatsby appeared at a historical moment during which the U.S. was battening down the hatches against immigrants and anxiously questioning the white credentials of some immigrants over others.

Also around this time, white supremacist writers Madison Grant and Lothrop Stoddard were producing works such as The Passing of the Great Race (1916) and The Rising Tide of Color Against White-World Supremacy (1920), in which they excoriated the encroachment of immigrants considered less-than-white in Anglo-America.  In Tom Buchanan, as several critics have noted, Fitzgerald creates a mouthpiece for the ideas of Lothrop Stoddard, especially those articulated in The Rising Tide of Color Against White World Supremacy (1920), thinly disguised in The Great Gatsby as “The Rise of the Coloured Empires by this man Goddard.”

What concerns me and these other critics is the idea that Gatsby is not a suitable partner for Daisy, a Southern belle who speaks nostalgically of her “beautiful white girlhood” because of a complex mixture of both class and race.  For Walter Benn Michaels, for example, “Gatsby (né Gatz, with his Wolfshiem ‘gonnegtion’) isn’t quite white, and Tom’s identification of him as in some sense black suggests the power of the expanded notion of the alien” (Michaels 25).  It is more or less accepted now that Jay Gatsby, born James Gatz, was probably Jewish and the combination of his working-class background and Jewish ancestry account for his cruel treatment by the East Egg elite.  In 2000, a scholar named Carlyle Van Thompson made national news in the United States when he delivered a paper at a conference in Charleston, South Carolina, entitled “The Tragic Black ‘Buck’: Jay Gatsby’s passing in F. Scott Fitzgerald’s The Great Gatsby.”  In his subsequent full-length study of passing fiction, Van Thompson offers comprehensive, though not always persuasive, evidence that Gatsby may be a light-skinned African American passing as white.

In my introduction to Baz Luhrmann’s The Great Gatsby (2013), I will talk a little about the casting of Gatsby across various adaptations, given these larger conversations about race and ethnicity in relation to the novel.  What does it mean, for example, to cast a very WASP-ish Robert Redford as Gatsby in Jack Clayton’s 1974 version? In the Baz Luhrmann version, the part is played by Leonardo diCaprio.  How might we think about these more famous adaptations in relation to the lesser-known film G (dir. Christopher Scott Cherot, 2002) which is loosely based on the novel and features an all-African American cast? I look forward to discussing these issues in a bit more detail on 20 May.

Sinead has written extensively about ‘passing’ and identity in American Literature.  Find out more about Sinead’s research here.