The next Screen Talks event will be on Monday 6th May at Exeter Picturehouse. Dr Will Higee (Senior Lecturer in Film Studies, Dept of Modern Languages) at the University of Exeter) will introduce A Self-Made Hero (Jacques Audiard, 1996)

Dr Will Higbee has written a guest blog-post for us on Jacques Audiard’s film which explores the myths around the resistance in French culture: 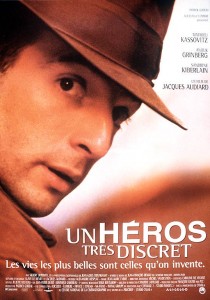 The next installment of the hidden classics of European cinema focuses on Jacques Audiard’s Un héros très discret / A Self-Made Hero (1996). Audiard is now a well-established figure both in French cinema and internationally, with a range of awards, Oscar nomination and box-office success for films such as A Prophet (2009) and Rust and Bone (2012). However, at the time of the release of his second fearure, A Self-Made Hero, he was perhaps best known for being the son of the celebrated French screenwirter Michel Audiard. This screening at the Picture House offers a rare chance to see the film brought Audiard to the attention of a wider audience both in France and internationally on the big screen. A Self-Made Hero is also a notable film due to the casting of the enfant terrible of French cinema of the 1990s, director and actor Mathieu Kassovitz. To the surprise of many crticis and spectators, Kassovitz carried the starring role with aplomb. A Self-made hero confirmed Kassovitz’s status as an screen actor of considerbale subtlty and quality – a fact that continues to be overlooked in France today.

A Self-Made Hero tells the story of Albert Dehousse, a young man exempted from military service and oblivious to the resistance activities of his wife during the occupation. After the war has ended, Dehousse decides to leave his home and family for Paris in order to fabricate a heroic past for himself as a resistance activist – a past the strangers and authorities around him, desperate to invest in myth of national resistance under Nazi occupation, are only to keen to validate.  Audiard’s exploration of the ‘great lie’ of France as a war resister was hardly a new departure, having been dealt with by historians as well as filmmakers since at least the early-1970s. However, the film offers a significant commentary on the selective process of memorializing history and the construction of a collective past that continued to take place in France during the 1990s.  Moreover, A Self-Made Hero’s treatment of the myth of France as a nation united in its resistance to Nazi Occupation during the Second World War remained highly topical at the time of release given revelations im France during the 1990s relating to outgoing French President Mitterrand’s links to the Vichy government during the occupation, as well as the trial a year after the film’s release of former Paris police chief, Maurice Papon, for his involvement in the deportation of French Jews to Nazi concentration camps.

As interesting as the film’s exploration of French history past may be, A Self-Made hero offers, above all, a beautifully crafted screenplay (where heritage film meets melodrama and political thriller) combined with assured direction from Audiard that draws excellent performances from the film’s cast. A Self-made hero provides a subtle and engaging exploration of deception and myth-making: considering the extent that an individual will go to create a new life and heroic identity for himself and the extent to which, when it feels that it needs to, society is only too willing to accept the lie that it is being sold.

Dr Will Higbee has written about Matthieu Kassovitz, and about contemporary French cinema and identity.  Read more about Will’s research here.

The next Screen Talks event will be on Monday 22nd April at Exeter Picturehouse. Dr Ginny Russell (Research Fellow at Egenis at the University of Exeter) will introduce Rain Man (Barry Levinson, 1988)

Dr Ginny Russell has written a guest blog post for us, outlining the film’s influence on the ways that autism is understood: 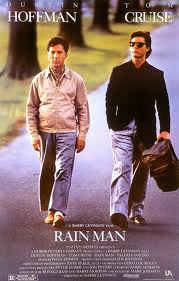 Rain Man was released in 1988 to overwhelmingly positive reviews. It is the story of yuppie Charlie Babbitt, played by Tom Cruise, and his estranged brother Raymond, played by Dustin Hoffman. Raymond is an autistic savant; his character was modelled on a person named Kim Peek, although not autistic, did have a developmental disability with similarities to autism. He was also a savant with an eidetic memory. Researching the movie, producers referred to the diagnostic criteria for autism to develop the characterisation.

Hoffman’s performance as Raymond is compelling and the character has enormous screen presence in the sense that you never know what he is going to do next. Rain Man won Best Film Oscar in 1988 as well as Best Actor for Hoffman. Despite his limitations, the audience is drawn to Babbet because in his case, normal rules do not apply. In this way, Babbet displays classic symptoms of autism: normal social rules are not easily understood or adhered to. Rain Man’s autistic-hero is a cinematic archetype with a long tradition: Zen, star of the Thai film Chocolate. Peter Seller’s idiot savant in Being There, and Tom Hank’s Forrest Gump are all heroes with limited intellectual and social capabilities who unwittingly conquer their worlds. It is the quality of innocence that draws us to these characters and to Raymond. Raymond is as naive as his brother is scheming and worldly, yet it is Raymond himself who eventually offers his brother the possibility of redemption: an emotional connection that transcends material gain.

For the autism community today, Rain Man had two important consequences. First it raised awareness of the condition, and in its wake has come a flood of popular autistic autobiographies: Temple Grandin, Daniel Tammet and Donna Williams notable amongst them. Autism’s increasingly high profile is most certainly partially responsible for the spectacular rising prevalence of the condition since Rain Man’s release. Such high profile media coverage has led to far greater recognition and application of the diagnostic label. The question of whether the rising prevalence of autism is entirely an artefact of changing diagnostic practice or whether there really are more children with autism today is the subject of my own research.

The second unintended effect of Rain Man was to inadvertently encourage a stereotype that autism equals special abilities. In fact, such savant skills occur rarely in autistic individuals, in about 1-10% of the population with autism according to Darold Treffert, the primary researcher in this field. Savant skills are known as islets of ability and a particular skill, maybe rote memory, artistic ability, or musical talent, is highly developed compared to other skills. Oliver Sacks has written beautifully about his experiences of such cases in his book An Anthropologist on Mars. The problem with the public notion of the autistic savant is it promotes an unhelpful stereotype of what is often a profoundly disabling condition. Most children with autism are profoundly affected, have no special talent, struggle with everyday tasks, and in many cases do not develop speech at all.

Rain Man is often cited by members of the emerging Neurodiversity movement who argue that autism should not be viewed as a sickness but an alternative and valid way of being. Autistic self-advocates frequently refer to Raymond Babbet and other autistic heroes in literature and documentary when they describe their own experience of autism. The philosopher Ian Hacking has suggested that such portrayals themselves shape and feedback into how the disorder is experienced and understood. In this way Rain Man provides a neat illustration of a representation of sickness on screen that has itself influenced understandings of diagnostic criteria as well as vice versa .

Dr Ginny Russell has written extensively about autism and how it is understood and diagnosed. Read more about Ginny’s research here.