Expressionist film was used to convey an emotion or meaning rather than mimicking reality. It was concerned with the ‘uncanny’ and the filmmaker was considered a creator who sought to find the “eternal, permanent meaning of facts and objects.” (Lotte Eisner citing Kasimir Edschmid in The Haunted Screen: Expressionism and the Influence of Max Reinhardt. In the 1920 film ‘The Cabinet of Dr. Caligari,’ a sequence commencing at around the forty first minute involves many theatrical elements as the character attempts to creep up on and kidnap the young woman.

Immediately we are shown a setting that looks as if it were constructed with paper, with windows on the houses clearly drawn on. There are many jarring shapes (mostly with sharp points) which makes the scene look busy even though there is only one actor in shot. The set is also very stationary which again gives the artistic impression of still life, rather than films that want the audience to understand the realism of the film and that life is continuously moving around them. It is reminiscent of the work of the artist Karl Schmidt-Rottluff, especially his painting ‘Houses at Night.’ 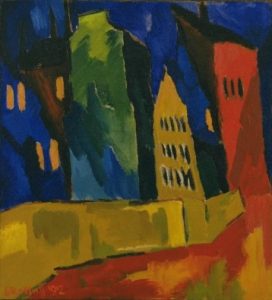 He wanted to reflect the urban lifestyle in his paintings, and emphasise the disorder and confusion of modern life. The sharp edges bring dynamism along to the painting, much like the set of ‘The Cabinet of Dr. Galigari.’ The distortion of the set helps to “evoke the anxiety of a town plagued by a murderer.” (https://www.moma.org/learn/moma_learning/karl-schmidt-rottluff-houses-at-night-1912)

The slow movements of the actor sneaking up on the girl is also very theatrical as it is clear every action is thought in terms of how an audience will view it. The sequence is presented in a way that would work just as well if it were a series of photographs or paintings. His non-naturalistic make-up is haunting, adding to the nightmarish, ghoulishness of the figure. Ernst Ludwig Kirchner was another expressionist painter who used harsh, jagged lines and non-naturalistic colours to convey the turmoil of modern life. He was best known for painting long, thin, and distorted figures, like in ‘Potsdamer Platz.’ 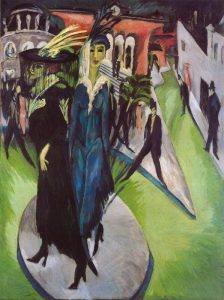 The figures walking along the side of the wall look very two-dimensional, as if they are pressed up against the wall. In ‘The Cabinet of Dr. Caligari” the stylised movement of the kidnapper is similar to the figures in the painting. He has a very tall and thin shape which is exemplified by the way he extends his limbs slowly when climbing through the window and walking through the street.

Expressionist art and film have a very close relationship, and art has clearly played a huge role in influencing film both stylistically and in meaning.

One thought on “Group D – Expressionism in Dr. Caligari”