The Long Goodbye is a major installation of ‘love letters’ to those of a century ago who engaged in the participatory democracy of volunteerism and employment in aid of their communities and countries. Led by 1914FACES2014 collaborator SM Steele, The Long Goodbye is an eXegesis Poetry Collective project, funded by an Exeter Award and by the College of Humanities, University of Exeter, and reflects on ways of ‘re-facing’ the conflict of 1914-18 through memorial and imagined connections to individuals who lived through it. 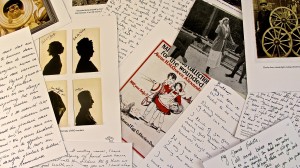 This project includes not only combatants, but also the millions of non-combatants – from the sphagnum moss pickers on Dartmoor, to the women ‘Canaries’ of munitions factories, to children collecting eggs for the wounded, the blind massage therapists, the pigeon fanciers who became part of the signal corps, the young boys who took to the mines at age 12 and 13 to support their families while the men were away, the women who knit and sewed for the 4 million refugees, the 1.2 million women who went to work in offices, as mechanics, dentists,  etc. etc. We also welcome letters to conscientious objectors, the valiant Quakers who served at the Front as Ambulance Corps. e.g., or those who joined the Non-Combatant Corps or who chose prison rather than fight, and we welcome letters from all sides of the conflict and in all languages.

We are looking for as wide an engagement as possible – including staff, students and the general public. All are invited to write a few lines on a postcard, or a letter, from us in 2014 to those in 1914 to those who left for the Great War.  This can include non-combatants, children, women and people of non-military age, who engaged in or who were affected by the war on all fronts  – the Western Front, Mesopotamia, Serbia, Africa, Australia, India etc

The installation of thousands of these letters will roll out on 4 August, 2014 from the Wall of the Welbeing Centre on the Streatham Campus, down the hill towards St David’s train station – the point of departure a century ago. 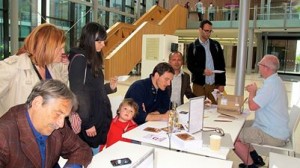 There will be an opening event on 4 August 2014 on the University Campus, which will include live music and dramatic readings from both the installation, and from Professor Tim Kendall’s Poetry of the First World War (OUP).  There will also be a presence from the Chaplaincy from all denominations. Keep a lookout on this website for more information about this event.