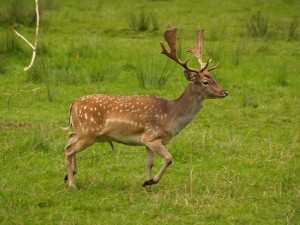 Naomi Sykes came to talk to us about the work of the Fallow Deer project. In a fascinating presentation she divulged a wealth of information about Dama dama past and present, and how the work of the project will impact, and is indeed already impacting, the future.

At the time of the glacial maxim, around 20,000 years before present, all fallow deer left Europe and headed to refugia in warmer areas. The likely locations of these refugia from genetic and zooarchaeological evidence, some of which provided by the Deer Project, are the Balkans and Anatolia. It has traditionally been believed that the Romans were responsible for the spread of Fallow Deer back to Britain, however, while the Romans did bring the animal to the UK it is not the Roman Fallow deer that is now so prevalent in the Britain and around the world. A second wave in the 10/11th century brought fallow deer back to the UK, and following this all other populations of Fallow Deer in the world are from this British animal.

Sykes argued that the reason for their global spread was about more than just meat. Fallow deer had a social and cultural significance, related to hunting, a warrior culture, imperialism (particularly in the British Empire) and gender. One of the aspects that was noted in the presentation was the practice of ‘unmaking’ a successfully hunted deer, where the haunches went to the lord, the right scapula to the parker and the left scapula to the best hunter, which was discovered to be visible archaeologically. There has been a shift over time in the way fallow deer are perceived, with an association with women in the past. Deer parks are a bounded environment in which women can be enclosed.

The Fallow Deer project has great relevance to the present, and is already in the process of doing something for the furture. Public engagement in schools and with the national trust has been well received by children and the public. Sykes concluded her presentation by encouraging everyone to go out and buy venison, to help with deer management strategies in the UK. Anyone interested in the Fallow Deer project can visit their website or follow them on twitter.