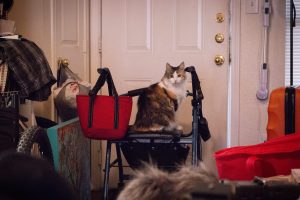 I met Angela at her tiny flat in San Antonio. There are art materials everywhere and the walls are adorned with artwork. We talked for a while about the project and allayed her fears that we expect a finished animation made to a soundtrack that we’ll provide, reiterating that we’ll be taking everything that the artists produce and then cutting that in to the visual element of the piece. We talked a lot the first day I was there about her art and herself. I asked some research questions and I’ve since emailed them to her as a potential jumping off point to maybe inspire some artwork and animation for the project.
I bought some reference cards and foldover clips to make some flip books with, and also a peg bar and some punched paper – animators stock-in-trade – to try doing some simple animation. She has a glass drafting table which, with the addition of  a lamp underneath will be perfect for traditional animation. Currently though it is stacked edge to edge with art materials and other possessions. She has said she would like to try using paint on the glass surface to do some animation. To that end I procured a tripod for her that can cantilever out so she will be able to set up a camera/ipad over the table with a birds eye view.
There was rather a lack of flat space to do any work, but Angela has an iPad pro with apple pencil that she uses for a lot of digital art. We installed an app called ‘animation studio’ for doing drawn animation and she took to it quite readily. she’s quite familiar with drawing on the ipad so it isn’t much of a leap. We also put a stop motion app on there so she can use the ipad (or a digital still camera) to do some stop motion. I did a quick demonstrator just with the ipad off the edge of a table and moving things on the floor. It was a bit of a challenge to do much animation there as at the time she didn’t have any space to work in. She is very enthusiastic and excited about the project and I look forward to seeing what she makes! I’ve told her to get in touch if she’s any questions or wants any feedback, but I’ll be in touch in a couple of weeks when I’m back in the UK and see how she’s getting on. 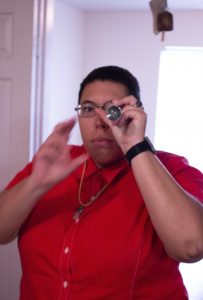