Different Voices in Bristol is an ongoing film talent development project for artists and filmmakers who self describe as being Neurodiverse.

They have run 4 Different Voices projects so far.

Catch our next #ExDxFilms event at the RAMM, Exeter on the 7th November.

Recently ExDx Research Fellow Dr Steven Kapp went to meet one of the project’s featured artists, JA Tan, in his native habitat. His studio is in Vancouver, Canada on Granville Island, is a creative paradise where artists study, work, and show or sell their products in crafts shops, boutiques, and galleries. Indeed, JA studied down the road at the Emily Carr University of Art and Design. 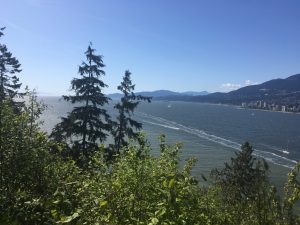 A table with awards and honours for some of JA’s achievements over the years greets entrants to his studio. His beautiful paintings decorated the peaceful space, illustrating scenes inspired by his travels around the world as well as his inner experiences. It was exciting to see the full-size piece ‘Throwing a Party’, which the ExDx website features on JA Tan’s page: https://blogs.exeter.ac.uk/exploringdiagnosis/artistsbiographies/ja-tan/! 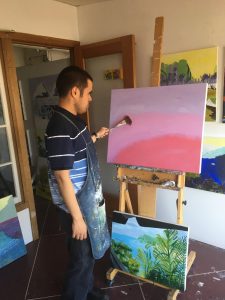 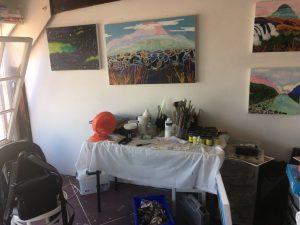 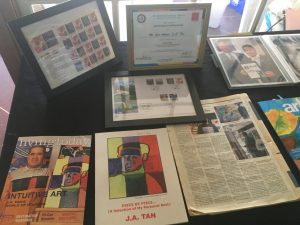 Thank you to JA and his mother Zelie and father Vince for their generous hospitality in Vancouver, and it was lovely to see them again in San Diego. 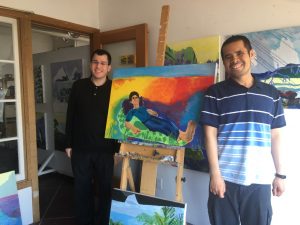 Thanks to the organisational skills of both Debra Muzikar and Dr Lamis Jabri from the Art of Autism our Films made their first International appearance at the Mozart & the Mind Symposium, San Diego on Sunday June 2nd.

“What thoughtful films.” and

“Just loved them!” to

“Moving, they made me cry!”

Sitting in the audience was one of the artists featured in our films, the talented JA Tan. 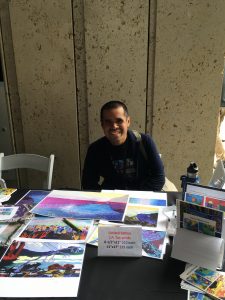 JA Tan with his artwork.

It was both a delight and privilege to meet him and his family at the event. 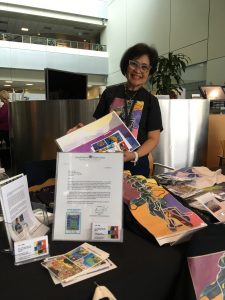 JA’s mother, Zelie, snapped on the first day of the Symposium with a collection of JA’s work including T Shirts featuring Dancing Silhouette Figures. 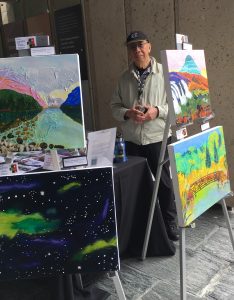 Vince, JA’s father, on the second day of the Symposium with yet more of JA’s incredible artwork.

At the end of the day Dr Jean Harrington, Project Manager for the Films, and Dr Steven Kapp, Research Fellow on the Exploring Diagnosis study were able to join a panel of experts, including musicians, members of the medical profession, film makers and parents of young people with a diagnosis of autism, to consider the content and outcome of the successful two day Symposium.

It was a significant event for #ExDxFilms and we would like to thank the organisers of the Mozart & the Mind Symposium and especially Debra Muzikar and Dr Lamis Jabri from the Art of Autism for their kind and generous support.

The next screening of our #ExDxFilms is planned for Thursday 20th June 2019 at Spike Island.

After first visiting our three Stateside artists in April – James Frye, JA Tan and Angela Weddle – Dom and Jeremy have been back for a second visit to again work with them and to see the artwork that they have been preparing for our films on Diagnosis, Neurodiversity and Art.  The trip was a great success with Dom and Jeremy thoroughly enjoying the time they were able to spend with the artists. 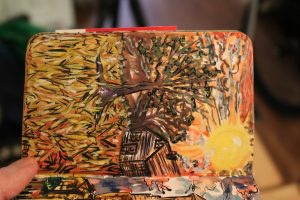 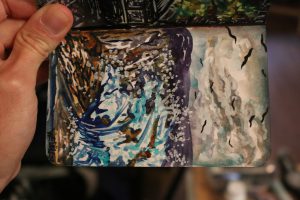 A Glimpse into Angela’s sketchbook.

AN UPDATE ON OUR FILMS

The three short films that we have been working on during 2018 capturing the voices of autistic adults, and the art and animation of autistic artists, are nearing completion.  Complemented by the beautiful cello compositions and playing of Sarah Moody we now are approaching the final cuts.  This is an exciting time!  Now into 2019 we shall be making the last minute changes ready to roll the films out at various locations during the Spring. Watch this space for an update on our progress and the locations where the films will be screened!

After we received the online feedback from our previous diagnosis leaflet which suggested that we make a version that would be accessible to a wider range of people on the autism spectrum, we began to create an ‘Easy-Read’ version. We achieved this by initially using an online readability checker to scan the text and flag up any words that may need altering in the new version. The layout of the leaflet was altered in accordance with an ‘How to Make Information Accessible’ resource from the Change People charity website.

The new version created was then looked over by our Exploring Diagnosis team, an Autism Spectrum Coordinator at Bury College, Manchester, and a group of autistic adults and support workers from Stallcombe House, Exeter. These several trial sessions allowed us to refine the leaflet such that it was clear and usable by the people for which it was intended.

The leaflet is now available on the Exploring Diagnosis website and Tes.

A big thank you to impact officer Clare Pybus for helping us achieve this! 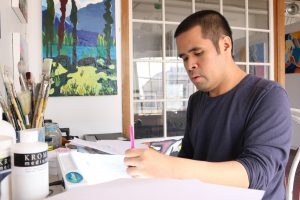 Today is Tuesday. We met once more outside the Tan’s place at 8:50 and walked to the studio. JA has a Wacom tablet which his dad bought for him. He hasn’t used it before, but we set it up on his laptop along with the open source animation software ‘pencil 2d’. He did just fine, but working on the computer is not his favourite so we returned to the land of paper and crayon. I just wanted to make sure he had the software installed and a handle on how to use it should he decide to give it a go when I’m not there.

We looked through JA’s sketch book and he picked a drawing he would like to animate. A penguin on a rocky beach. He looked at a video on his camera as reference and animated the penguin flap and look up. Once he was happy with the penguin animation he drew a rocky background and traced it on to each frame. He then coloured each picture and after that photographed them with the animation app. we worked without a break for about 3 and a half hours. Jeanne told me the next day that usually they’ll do about 2 hours with a half hour break in the middle so this is a pretty prolonged and intense period of concentration. JA got a headache and we called it a day and went for lunch. on the way he introduced me to the person who makes paint in the paint shop. They make incredible acrylics.

On Monday we met at 8:50 outside the Tan’s apartment and I walked with JA to his studio. His mentor Jeanne (who is also a tenant of the studios) met us there. I was going to start with a simple flick book made with reference cards and a foldover clip but on the advice of Jeanne I busted out the peg bar and a ream of paper I had pre punched. JA finds it easier to work on a larger scale. I did a quick, simple ball bounce. First day of animation school stuff. Having seen what I did, JA drew his own ball bounce. We recorded it it on His iPad using the animation app I’d installed the day before. Next a little colour was added with pencil crayons.

Bouyed by this success I demonstrated simple morphing in a flip book. Circle to square to triangle. Again, JA made his own version after seeing how I’d done it. Finally in this session

I drew a figure of 8 track on a piece of punched paper and demonstrated how it could be used as a guide to animate a coloured blob whizzing about. Once again, after a practical demonstration JA took to it like a duck to water and a colour changing scribble was soon zooming about the iPad’s screen. JA asked that I help him carry his stuff back home. On the way he introduced me to some of the people he knows on Granville island. He requested that we meet agin the same time tomorrow. 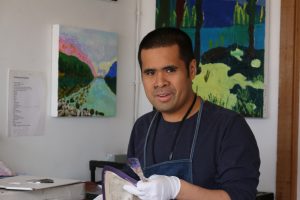 I arrived in Vancouver late on a Friday night in the pouring rain. JA’s parents had arranged for us all to meet on Saturday afternoon, just so JA would know who i am and we’d not be going in cold on Monday morning. Unfortunately JA had plans already. His parents drove me around the city and Stanley park and showed me the sights which was lovely. We spoke a little about the project and arranged to meet mid morning on Sunday, JA too this time.
I met up with the Tan’s outside their apartment and we walked down to Granville island where JA’s studio is located. It is a lovely room with a big window in a complex of artist’s studios. On the walls hang a dozen or so recent works and by the entrance is a large rack with heaps of painted canvases. JA tells me about the group of seven, a Canadian collective of landscape painters from 1920 – 1933, who he is currently studying. He also shows me his sketch books from his recent cruise around South America. Seals, Llamas and penguins abound! Over lunch we installed an animation app on his iPad 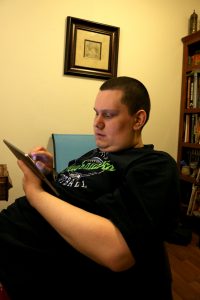 Last session with James today. I’ve procured an iPad for him. He is rather taken with the book ‘the animator’s survival kit’, which I’d given him on the first day we met. It has an iPad version with the examples animated, so with the iPad set up off we purchased it from the App Store. I also added the free version of the animation studio app Angela had put on her iPad and we had a look at that while the rather large animators survival kit app downloaded. James wasn’t particularly keen on it saying that drawing with his finger is too sloppy, but he picked up the app fairly well. I’ve suggested to his parents that it might be worth getting a cheap stylus for him to try drawing with on the iPad or perhaps just going straight for the apple pencil.
James did another 20 frame sequence on paper and we scanned it in and I got him to import the files in to imovie and make them an animation so I know he knows how to do it. most of the hobby stores and even walmart sell 10″ x 12″ light boxes for $40 – $50 so I mentioned that if drawing on paper remains popular the one of those might be a wise investment.
I’ve found a bit of open source software called pencil 2d. James is already familiar with working on a computer using a pen tablet. Thats how he does most of his drawing. The software seems quite simple and intuitive and I’d hoped it’d be a great way for James to work. Unfortunately his computer needs and OS update in order to run and it’s not my computer so I am unwilling to just do it. Confident though I am that everything would be fine. I think his dad was going to have a look at it tonight, so maybe it’ll be updated and I can give it another go tomorrow.
Luckily I had a plan B up my sleeve. I purchased a peg bar for each of the artists. a simple animation device on which one puts sheets of appropriately hole punched paper. This keeps the drawings on the paper lined up. I did a quick 10 frame bouncing ball loop and photographed it with an animation app on my phone. One of the advantages of working this way is that you can see through the layers of paper to previous drawings which grants greater control than something like a flip book. Much like the flip book; James got stuck in and did a 100 frame sequence. He was pretty focused on that so I went upstairs and had a cup of tea with his mum.
Drawings done, we scanned them using Image Capture on his mac then imported the stills in to iMovie where they became an animation. I’m very impressed with how readily he took to the technique. 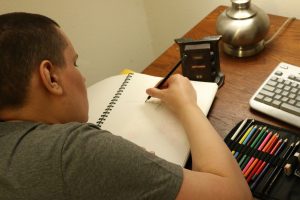