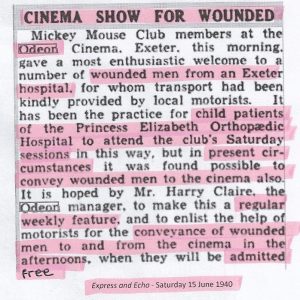 What is the source? (Woody)
The source we chose is a news article from Express and Echo (15th June 1940). The main focus of the article is showing the relationship between the ODEON Cinema and the community of Exeter during World War II. The ODEON Cinema took the role of calming people by offering wounded men the opportunity to come to the cinema for free, attempting to relieve their pain from the war by escaping from reality for a few hours. Connecting the community with the soldiers united everyone, showing how even entertainment companies and cinemas had a strong role during wartime.

What can it tell us about wartime cinemagoing in Exeter? (Megan)
What this source can tell us about cinema during wartime in Exeter is that even though it was an incredibly difficult time, the patrons of Exeter all came together in trying to do something nice for the wounded soldiers. It can also tell us that the cinema was used as a way of escapism from the terrible reality in which they were all living.

What can it not tell us? (Dan)
However, there are limitations to how useful the source is. For instance, it cannot tell us whether this kind of event continued in Exeter, or if it was just a one-off. The source details that the Odeon’s manager hoped to make the event a weekly feature but fails to clarify if this ended up being the case.

What other sources can it be used in conjunction with to help us learn more about cinemagoing in Exeter? (Francesca)
As mentioned, the source cannot tell us if this type of event was common. Therefore, in order to learn more, we would need to consult other sources. There is another Express and Echo article (3rd June 1940) that tells a similar story (see below). We would also need to examine other sources to understand if this experience was unique to the ODEON cinema, or if it was a common practice in many cinemas around Exeter (there is a picture below of veterans who were invited to a showing at the Gaumont cinema). Therefore, as I have illustrated, we would need to combine this source with others to get a more accurate picture of cinemagoing in Exeter. 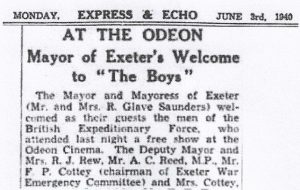 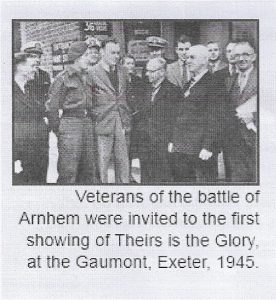