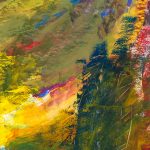 Grace Walker Goad was diagnosed with moderately severe autism with intellectual disabilities and severe speech/language disorder at just under age three, in 1997, and has been painting since she was four.

Because autism subtly affects the muscle tone of portions of her grasp, her work is largely abstract. Yet, her advanced use of color and composition has been lauded and featured on the 2007 autism episode of ABC’s “ The View;” on Al Jeezera America; on the cover of The American Journal of Psychiatry, among other magazine covers; the cover of the book, Making Sense of Autism, and in The Art of Autism: 2012 Edition, as well as numerous local and national newspapers, magazines, and other television and online media, including The New York Times.