Music is seen as an expressive tool where individuals can express their emotions. We often use music for many different purposes e.g. aesthetic appreciation or religious worship. However, music is often a battlefield for gender and inequality issues. Gender stereotyping is not a new phenomenon in music. During the 1980s, the majority of women in music videos were dressed sexily (Gow, 1996) while men  are seen as masculine figures and carry hegemonic masculinity.

How Males are portrayed in the songs sung by artists 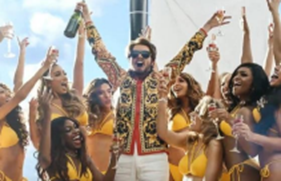 When listening to music, especially songs sang by female singers, it comes as un surprising that men are portrayed as having all the power. The lyrics “I’ll be a  fearless leader and I’d be an alpha type’’ (The Man, Taylor Swift), shows that the  image of a top manager in society includes a successful man with a strong  masculine presence (Acker, 1990). Messner (2000) supported this view stating that  men usually hold position e.g. head coach and assistant coach.

Male are also seen as more privileged than females, as they are usually ‘’ranking in  dollars, and getting bitches and models’’ (The man, Taylor Swift). This shows that  men are like free spirit animals who constantly search for dreams and living the best  of their life (Hyden & McCandless ,1983). And, lyrics ‘I’d be just like Leo in Saint  Tropez’ (The Man, Taylor Swift) shows that men are like playboys, and Leonardo  DiCaprio (fun fact… Leo has a reputation for flirting with different girls, he always  takes his girl friends to have fun in Saint Tropez).

Aside from that, men are portrayed as capable of breaking women’s hearts (shame  on them….). This is demonstrated in lyrics “How’s your heart after breaking mine?” (Taylor Swift, Mr. Perfectly Fine), the female singer was devastated after being left by a guy. Similarly, another lyric ‘’Pretends he doesn’t know that he’s the reason why you’re drowning….’’ (Taylor Swift, ‘I know you were trouble) conveys the same  message. Men being a heartbreaker can be linked to Click and Kramer (2007)’s view  that women are perceived to be the ones who constantly have their hearts broken  and wish for shooting stars.

How females are portrayed in the songs 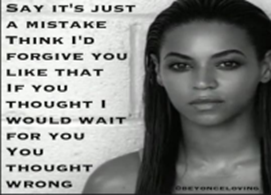 If men are usually seen as powerful and masculine? Does that mean women are  being seen to having the same characteristics as well??

Well… the answer is probably not. Women are typically portrayed as fragile and  weak in songs sung by female singers, as they tend to break down more than men  after a relationship ends. This is evident in lyrics ‘Everything that I do reminds me of  you, and the clothes you left, they smell just like you’ (Avril Lavigne, when you’re  gone). This showed that women were unable to let go of the men and she still  believes that the clothes he left smelled like him. Therefore, women are seen as  weak and needy (Lisara ,2014). 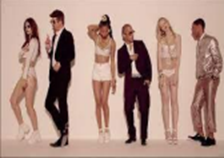 Other than that, in songs sung by male singers, women are viewed as objects that  are constantly being view by men. Sexual objectification occurred through body  representation e.g. sexy clothing, body parts (Flynn et al, 2016). This can be seen in  lyrics, ‘’Missing more than just your body’’ (Justin Bieber, sorry), ’Everyone else in  the room can see it, everyone else but you’’ (One Direction’s What makes you  beautiful). These lyrics have shown that man has missed the body of the female he  is speaking of ,and it also indicates that a woman’s body is still meant to be touched, even if the man doesn’t deserve it due to his mistakes. Once again, female is being  seen as object more than male artists (Flynn et al, 2016).

However, women are not always seen to be portrayed as weak and sexy figures.  Songs that are mostly sung by female artists themselves try to fight against  marginalization and push for equal rights as well as empowering women (Nwabueze,  2019). Lyrics ‘’I don’t need a man to be holding me too tight’ (Kesha, women) ‘’She’s  on top of the world, hottest of the hottest girls’’ (Alicia Keys, Girl on fire) showed that  women can live a better live by themselves. This is in consistent with Nwabueze  (2019)’s findings that women are seen to be able to rule and bring positive changes to the world. Yet, we can also argue that only songs sung by female artists are able  to portrayed woman in a positive way. 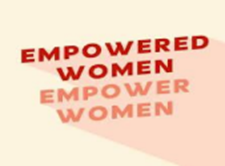 Men and women are portrayed differently as we live in a world where certain  activities are classified as masculine or feminine (West & Zimmerman, 1987).  Therefore, we can see that gender is socially scripted and that men and women  must perform a set of performances in order to fit into society.

I think it is crucial for us to achieve gender inequality in our society as young adults  always listens to pop music. Music will influence their perceptions of relationship, sex and gender roles. As a result, the music industry has a big impact on gender  construction. To achieve gender equality, I believe more female composers and  singers as well as more positive lyrics about women are needed. 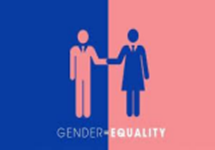 (life is not only about competition; it is also about  collaboration between men and women, therefore, men and women must be treated  equally)