Have white working-class men been left behind in today’s Britain? A two-part documentary Working Class White Men on Channel 4 asks this question. It delves into claims these men are on the bottom rung for employment, university degrees and most afflicted by addiction and suicide. Presented by Professor Green, real name Stephen Manderson – a white rapper who grew up on a Hackney council estate and identifies as from a working-class background, it follows six men “trying to make something of their lives.” Their stories, Manderson believes, reveal a crisis at the heart of the working class. Over images of motorbike packs raging around empty carparks and Britain First marches, he warns “white working-class men are losing their way, demonised, forgotten and angry.”

The opening claims appear to be reproducing an image of disenfranchised white working-class men which has proliferated since the EU referendum in both political and social science discourse; they’ve been having a tantrum about immigration, alienated by the liberal consensus  and participating in alt-right movements as a validation of their masculinity.  As we meet these young men, however, this polemic view begins to fragment. David, 20, has lost both his parents and lives in a homeless hostel. Dyslexic, his letters for job seekers’ allowance remain unread. Watched over by a mentor who blames immigration for why British men are ignored, pastoral care unravels as grooming for Britain First. David is vulnerable, we’re told, because “all he has is his Britishness and his whiteness.”  Louis has excelled in maths winning a place at Cambridge. Despite his heavily curated sartorial efforts and practiced Etonian accent defying his state educated, council housed background, he’s tormented his new cohort will see him for what he is. Jake works with his father as a builder, the archetype of the traditional white working-class breadwinner with a job to pass onto his son. Jake would rather be a model and has just got a job on a photoshoot in Tokyo. Denzil pin-balls from one money making scheme to the next. He’s planning an illegal rave in a disused prison, enabled by reduced police numbers in his area rendering the law powerless to shut it down. He’s getting creative with the austerity measures cutting-off support to this forgotten England and partying in the relics of a prison system we are told is filled with white working class men. 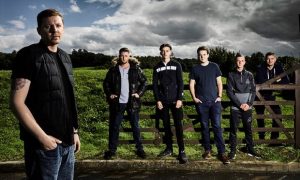 On one count, these diverse lives rewrite rhetoric.  A homogenously presented group are fragmented into variously enacted subjectivities, constructed through differing experiences, desires and contexts. It reflects Connell’s sociological work exploring how masculinities are complex and contingent as a way of dismantling a fixed male type or gender order. Manderson’s recollections of his youth weave into the men’s stories, the antithesis of the awkward probing of some other established documentary makers who trade discomfort for insight. He achieves what as anthropologists, we often try to do: take social stereotypes and disrupt them with empirical complexity and explicit reflexivity. Working-class can here be explored as an identity that is variously reproduced and disregarded by those who claim it.

But, there are contradictions: the documentary’s narration reproduces the rhetoric that this group of men specifically are struggling with their identities and life chances and ignores anyone who would be outside this now fragmented category. Firstly, we see and hear these men’s mothers, wives, girlfriends and daughters but their influence or agency is ignored in the analysis of the crisis. Concern is placed on the loss of the male breadwinner role and father figures as crumbling the “heart” of the working-class. Ideologically here, men are the most effective social actors, even in their absence. Secondly, what being “white” means is ignored. There is no explicit reflection about ethnicity; whiteness is simply conflated with Britishness. Further, the documentary tells us there are 30,000 white working-class men in prison. There are also  21,937 prisoners from BAME groups.  10% of the prison population are black, which is significantly higher than the 2.8% of the general population they represent. In terms of employment rates, BAME people are still lower than white British. The unequal distribution of life chances encountered by the white working-class the documentary is exploring is predominantly with reference to other white men.

Working Class White Men contradicts itself.  Empirically, it challenges any homogeneity in categorising white working-class men by showing a multiplicity of voices. But it then reproduces an ideology without any interrogation that white men are the primary effective actors. Its own rhetoric is that society doesn’t work when white men don’t work, when they are imprisoned or struggle with their life chances. This move both misrepresents other genders and ethnicities who may identify as working class and reproduces bias about who are the most effective actors in British society.