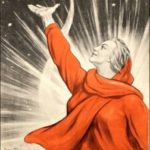 Professor Muireann Maguire and Dr Eglė Kačkutė will co-convene a two-day online conference “Radiant Maternity”  on January 28th and 29th, 2022 to launch the Slavic and East European Maternal Studies Network. See below for a full programme.

We hope this event will boost and consolidate networking initiatives and knowledge exchange between scholars of Slavic and East European Studies (SEES) and non-SEES Maternal Studies academics, and we invite established Maternal Studies scholars from the latter group to act as mentors and peer supporters to SEES specialists who are entering this field. Panel topics include but are not confined to literature (maternal fictions), various fields of cultural studies, history, and sociology. Anyone wishing to attend as a non-speaking delegate should contact  by January 21st, 2022, to register their interest. The language of the conference is English and all times are given in GMT. 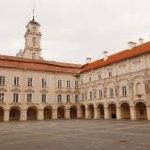 Vilnius University Main Court – the original location for this conference, before circumstances compelled us to go virtual

Distinguished historian Professor Natalia Pushkareva (Russian Academy of Sciences, Moscow) will deliver the keynote lecture, “Bearing with Birth: A History of Childbearing in Russia as a Subject of  Academic Research”.  There will also be several optional non-academic sessions open to delegates, including a Maternal Journal session from creative artist Laura Godfrey-Isaacs. To promote networking and knowledge exchange, established non-SEES Maternal Studies researchers will chair each of the panels. In addition to aligning SEES Studies scholars with peers and mentors in wider disciplinary fields, we hope to use this conference to identify research themes to be further refined (in collaboration between SEES and non-SEES scholars) at our one-day in-person Exeter symposium to be held on July 9th, 2022 and ultimately published as an Open Access edited volume.

8.15 am (preliminary remarks by the organisers, Eglė Kačkutė and Muireann Maguire)

Bearing With Birth: The History of Childbirth in Russia as an Object of Sociological and Academic Research

Following the keynote, there will be an intermission for lunch until 2pm.

7.30pm-9pm: Online discussion of contemporary maternal fictions from the SSEES region, free registration via Eventbrite. Open to the general public.

5.30pm Closing remarks AND online tour of the ‘Portrait of a (Working) Mother’ Exhibition, created and curated by Marina Cavazza and Eglė Kačkutė