The Neighbourhood Analysis is one of the three tools being used in HAIRE to help us understand healthy ageing in rural places. The University of Exeter research team were able to visit a local pilot site in Feock parish and listen to what people had to say. 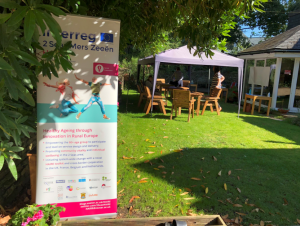 Feock’s neighbourhood analysis took place outdoors in Linden Hey Garden Tea Room in August. Linden Hey has been an important meeting place for people in the Feock parish, and for that reason might well provide a future site for other activities and meet ups. We were able to safely social distance, with three round tables at which community members were seated. 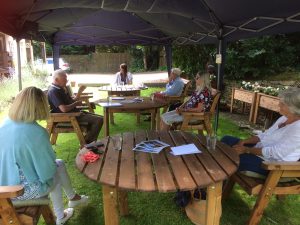 It’s a beautiful setting, and during the session we were joined by small birds, mostly robins, flying in and out of the garden. In one session, a vole even peeped out at us. We talked about the neighbourhood as we drank tea from red and gold floral china cups and ate lemon drizzle cake made by the owner of the tea garden (there may or may not have been scones with cream and jam. Local tip: jam first in Cornwall!) 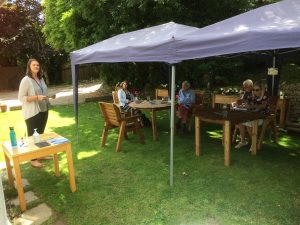 Feock’s HAIRE Project Co-ordinator and Administration Assistant, Bex and Esther, put the session together. Bex put a flip chart on the glass windows of the cafe and the analysis began. This is a tool developed by our Dutch partners at Solidarity University and will be used by all the pilot sites in the HAIRE project. It involves the creation of a “rich picture” in words through brainstorming and mapping the neighbourhood. People were asked to talk about: 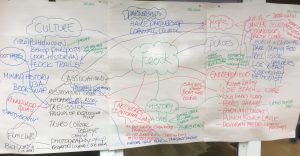 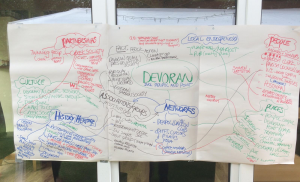 There are many individuals who support others in the parish of Feock already. The trust and relationships within the community are important to recognise. This exercise helped us gain an understanding into these relationships as well. Questions and comments flowed, and during a break, people asked more questions about the project and chatted about local planning, who was moving into the area and other local issues.

The resources collated during the sessions will be used and and built on during the rest of the project. The information collated will provide a useful starting point to link and support, wherever possible, individuals to activities, groups and organisations they may not have been aware of and identify venues or spaces that may be appropriate for new activities, groups and organisations.

We continue to learn so much about our pilot sites from the communities themselves. It is an integral part of making sure that any innovation, new product or service is relevant, because it will come from the very people it is designed to serve. 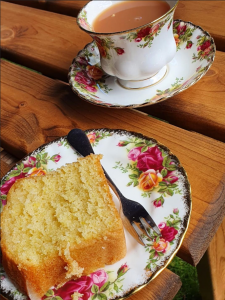