Economic globalization is currently under threat from a populist political backlash.  A common narrative is that this backlash is partly a result of a trade-induced increase in inequality.[1]  In our recent research, we show that the same mechanism that causes greater trade-induced inequality – a higher relative demand for skill – also allows an increasing number of Indian sons from underprivileged backgrounds to enter better occupations than their father.[2]  This suggests that, when thinking about the effects of trade on labour-market opportunities for the poor, we must keep in mind international trade’s ability to provide a pathway for children from underprivileged backgrounds to move up the occupational ladder. 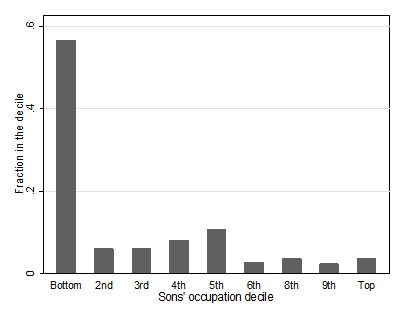 To identify the impact of trade on occupational mobility, we use nationally representative household surveys collected by the National Sample Survey Organisation (NSSO).  These data are for the year 1999 and allow us to categorize individuals in our sample in to 335 three-digit occupations.  With these data in hand, we examine whether, all else equal, a son residing in an urban district with greater exposure to trade liberalization is more likely to be in an occupation that is higher ranked than that of his father.[3]  We define a district’s exposure to trade liberalization as the change in the weighted average tariffs of all manufacturing industries located in that district between 1987 and 1998.  A key advantage of our context is the fact that India’s trade reforms were enacted under pressure from the International Monetary Fund and provides us with exogenous variation in tariffs in the post-reform period.[4]

Our analysis shows that greater exposure to trade liberalization allows an increasing number of sons from underprivileged backgrounds in India to enter better occupations than their father.  This result is both statistically significant and economically meaningful.  It suggests that differential exposure to trade explains 46 percent of the difference in upward occupational mobility between a district at the 25th percentile of upward mobility when compared to a district at the 75th percentile.

What explains this effect?  We show that sons residing in more liberalized districts in 1999 are more likely to be employed in skill-intensive industries. This is consistent with the idea that trade induces an increase in the relative share of skilled occupations.[5] While this effect goes hand-in-hand with a rise in the gap in skilled and unskilled wages, it also creates exactly the type of occupations that underprivileged sons need to move up the occupational ladder.  Interestingly, we also find evidence of spillover effects where manufacturing tariff liberalization leads to greater intergenerational occupational mobility amongst sons working in non-manufacturing industries.  We show that this result can be partly explained by the rising demand for skill in downstream manufacturing industries spilling over in to upstream non-manufacturing industries.

Our results offer a more nuanced perspective on the prevailing narrative that trade leads to adverse labour-market outcomes for underprivileged individuals. While trade may increase the skill premium, it also has longer-term effects that facilitate upward intergenerational mobility. For developing countries in particular, these longer-term effects of trade on occupational mobility have the potential to significantly improve the lives of underprivileged individuals.

[3] We rank occupations by calculating the average education of individuals in that occupation in 1987, which is prior to the trade reform of 1991.  Thus, we do not allow this ranking to change over time. Our results are robust to ranking occupations based on average wages instead.

[5] We develop this idea more formally in an appendix to our paper. Following Aghion et al. (2009), we show that the threat of foreign entry encourages domestic firms that are relatively close to the technology frontier to increase their innovation effort, thereby leading to an increase in the share of high-skill occupations.

The Environmental Economics Research group is an international academic leader in sustainability assessments of clean technologies and valuation of ecosystem services, and a visible source of robust science-driven advice in these domains. The group focuses on addressing empirical questions with a high societal urgency, for example related to global climate change and loss of biodiversity. The group publishes in top-ranked academic journals and is represented in national and international scientific and policy advisory boards. Currently, it consists of 3 professors, 4 postdoctoral associates, 12 PhD researchers and 5 research affiliates. The complexity of environmental issues requires multidisciplinarity and the research group is therefore part of the Centre for Environmental Sciences (CMK), where it works with researchers from biology, ecology, biomedicine, chemistry and law in multidisciplinary projects.

Teaching responsibility can include courses in the field of microeconomics, environmental economics and the economics of technology within the Bachelor’s and Master’s programs of the faculty of Business Economics. The candidate also contributes to the development of the pedagogical framework.

The successful applicant will help strengthen the existing research portfolio of the Environmental Economics research group. She/he will lead economic, as well as interdisciplinary research projects with a strong empirical focus within the research group and CMK, in collaboration with scientific partners inside and outside Hasselt University. Important objectives are the realization of publications in leading academic journals, the extension of the existing research network and the supervision of doctoral students.

* Doctoral degree in applied economics, economics, environmental economics, or in another field related to the focus areas of the research group

* A high-quality research profile that fits strongly to the current scope of the research group as outlined under background, and that shows that the applicant has potential to publish in internationally recognized academic journals

* Track record of successful grant applications, with experience in acquiring grants from Flemish, Belgian and European agencies being an advantage

* Excellent teaching, communication and organizational skills in order to provide excellent teaching in the Bachelor and Master programs of the faculty of Business Economics

* Experience in doctoral supervision is an advantage

We will offer an appointment as a lecturer (assistant professor) in the tenure track system during 5 years. This will lead to an immediate permanent contract as a senior lecturer (associate professor), if the Board of Directors favorably assesses the party involved, based on a previously defined set of grading criteria.

Preselection based on application. Interview with and test lecture/presentation by the pre-selected candidates.

More about the research group: http://www.cleantecheconomics.be/

in its research area “International Finance and Global Governance”. The starting date is flexible, but should be no later than early fall 2018.

The doctoral student will join the third-party project “Populism and economic upheavals since 1870”. Our research agenda in this project is ambitious, as we aim to create a new cross-country dataset on populist voting over the past 140 years and use this to explore the economic determinants and consequences of populism rigorously (focusing on the role of inequality, financial crises, and globalization).

We are looking for a candidate who meets the following criteria:

• Master’s degree (completed or close to completion) in economics, political science (with a strong quantitative focus), or a related field

• Experience and interest in the research topics of our group, in particular political economy

• Good knowledge in data management and coding is desirable, as is previous work experience in empirical research (e.g. as a research assistant)

The contract is initially limited to 3 years according to the law on limited employment contracts in research (WissZeitVG), but an extension is possible. The salary is based on the German public sector pay scale (EG 13 TV-L) with 75% of a full-time position (currently 29,025 weekly working hours).

The Kiel Institute is an equal opportunity employer with a certified family-friendly policy (http://www.ifw-kiel.de/about-us/equal-opportunity-at-the-kiel-institute/). We promote the professional opportunities of women and strongly encourage them to apply. Women with equivalent qualifications, competence and expertise will be given preference. We are committed to employing persons with recognized disabilities and will therefore give them preference over persons without disabilities if they are equally qualified.

Please submit your application online, using your family name as the file name including a letter of interest, your CV, academic transcripts, as well as proofs of relevant work experience (ID-No. “PhD_PolEcon”) to https://www.ifw-kiel.de/about-us/job-vacancies/Application_Form. Please list the names of two potential referees in your CV (e.g. your thesis advisor or work supervisors).

The deadline for applications is April 20, 2018. For questions regarding this position please contact Prof. Dr. Christoph Trebesch () or Dr. Manuel Funke ().

This is the twentieth conference in what is now the largest (and friendliest) annual conference on international trade in the world.

ETSG 2018 is being hosted by the SGH Warsaw School of Economics in Warsaw (Poland). The call for papers and information about location, hotels, and visa rules will be available soon.

Prize for young economists awarded by RoWE
We are very pleased to announce that the Review of World Economics (ROWE) will award the fourth annual prize for young economists at the ETSG Conference 2018 in Warsaw. The selected paper will receive €1,000 and the possibility to be published in ROWE. Only papers presented at the ETSG 2018 Conference (co-)authored by young economists (i.e. within 2 years of PhD completion) will be eligible. Authors of accepted papers will be informed of the procedure to submit their paper for consideration. Prevoius winners are listed in the Award Winners page.

Prize awarded by the WTO
We are very pleased to announce that the WTO will award the tenth annual WTO Essay Award for Young Economists at the ETSG 2018 in Warsaw. The deadline for submission (through the WTO website) is June 1, 2018; more details are available on the WTO website. Prevoius winners are listed in the Award Winners page.

Presentation facilities
All of the rooms being used for sessions are equipped with overhead projectors and data projectors connected to personal computers. Powerpoint and Acrobat software will be installed on all machines. If you wish to use a data projector, please bring your presentation on a USB memory stick. Files can be loaded onto the computers during the breaks. Due to time pressure within sessions, it will not be possible to connect your own laptop to the projectors.

Conference schedule
Please note that this year’s conference will begin at lunchtime on Thursday 13 September with a presentation by the EU Commissioner (lunch will be provided) As always, the conference will end late in the afternoon of Saturday 15 September. Please plan on attending the entire conference.

Registration
Please remember that all participants, regardless of whether they present papers, will be required to pay a fee for attending the conference. This has been set at €70. Notice that this is only a fraction of the per capita cost, but will help in keeping ETSG conferences viable.

16 June 2018:
successful authors will be notified.

29 July 2018:
deadline for conference registration and submission of full paper

The next meeting of the “ITSG – Italian Trade Study Group” will be organised by University of Salento and Fondazione Manlio Masi on May 10-11 2018.

Complete papers (or advanced drafts) should be submitted to the Segreteria Fondazione Masi –  by April, 5th 2018.

The acceptance of the papers will be notified no later than April 18th, 2018.

Link to call for papers

Click here for a link to the PEIO site.

We would like to welcome the following new members of the InsTED network:

Beatriz Manotas Hidalgo Her research interests are in economic growth, development and the effects of globalization on poverty and social conflict.