The idea that economic crises can lead to increased crime is far from new, dating back at least to the Great Depression of the 1930s.[1] Such concern is well justified, as crime imposes a substantial welfare cost on society. However, estimating the causal effect of economic conditions on crime and quantifying this relationship has proven to be elusive. Indeed, finding an exogenous variation in economic conditions is quite challenging and there are different potential threats to identification, such as omitted variable bias and reverse causality.[2]

In a recent paper, we overcome these challenges by exploiting the Brazilian trade liberalization of the 1990s, which provides a natural experiment that generated exogenous shocks to local economies in the country.[3] Brazil is a particularly appealing empirical setting, as there is little evidence on the effect of economic conditions on crime in developing countries with a high incidence of crime. In 2013, Brazil was ranked first worldwide in absolute number of homicides (more than 50,000 occurrences per year) and 14th in homicide rates, with 25.2 homicides per 100,000 inhabitants.[4] However, the country is not an outlier within Latin America and the Caribbean: according to the UNODC, 14 of the 20 most violent countries in the world are located in the region. Besides high incidence of crime, these countries also have in common poor labor market conditions, weak educational systems, and high levels of inequality. In such context, adverse economic shocks can have more severe effects on crime, with potentially larger welfare implications.

In our empirical design, we follow the previous literature[5] and exploit two features of the Brazilian context. First, the trade liberalization episode was not only characterized by large tariff reductions – which fell from 30.5% to 12.8% between 1990 and 1994 – but there was also substantial variation in the intensity of tariff cuts across industries. Second, regions in Brazil have very different economic structures and specialize in the production of different baskets of goods. The combination of these two features therefore implies that the trade liberalization leads to very different levels of exposure to foreign competition across regions. For example, Traipu in the state of Alagoas was largely specialized in agriculture, which actually experienced a slight increase in the level of protection (i.e. tariffs). In contrast, Rio de Janeiro specialized in apparel and food processing, both of which experienced substantial tariff reductions. Thus, one could expect Rio de Janeiro to be more adversely affected by the trade opening than Traipu. This reasoning provides the base for our empirical approach, which exploits this exogenous variation in exposure to the trade shock across regions.

We show that regions more exposed to the trade shock – i.e. more specialized in industries facing larger tariff reductions – experienced a relative increase in the number of homicides in the years immediately after the end of the trade liberalization, but the effect completely vanishes in the long run. This can be seen in Figure 1, which shows the differential increase in the logarithm of crime rates in regions facing larger reductions in tariffs relative to regions that experienced lower tariff reductions. This large effect contrasts with those found in the previous literature, which typically shows that worse economic conditions are associated to higher property crime, but find no effects on homicides. However, previous studies have focused on developed countries (Mustard 2010), which have relatively low crime rates and stronger baseline economic conditions (i.e. lower inequality and better functioning labor markets). 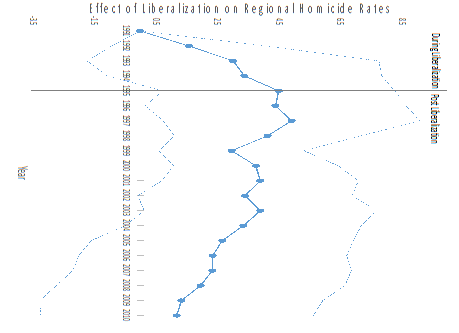 Having established the overall effect of the trade shock on crime, we use the dynamics of this effect to directly investigate its potential channels. We show that the trade shock substantially affected different potential determinants of crime, such as labor market conditions, public goods provision (public safety and government spending), and income inequality. However, only the effect on labor market conditions (as measured by employment rates) follows the same dynamic pattern as the effect of the trade shocks on crime. Importantly, these two dynamic responses are very different from those observed for other potential determinants, such as public goods provision and inequality. This strongly indicates that the employment rate is the key channel to explain how these local trade shocks affected crime. In the paper, we develop an econometric framework that exploits these different dynamic responses to identify lower and upper bounds for the effect of labor market conditions on crime. We find that employment rates accounted for 75–93% of the observed effect of the trade shocks on crime.

In sum, our results highlight that crime is an important dimension of the adjustment costs to trade shocks. Hence, to the extent that trade opening leads to transitional unemployment, there can be substantial externalities associated to this adjustment process in the form of temporarily higher crime rates. Moreover, our results indicate that employment rates are the key mediating channel of the overall effect of trade opening on crime.

Interestingly, earlier research shows that the long-run employment recovery in Brazil occurred exclusively via informal employment, as formal employment does not recover even 20 years after the trade opening episode.[vi] These results therefore suggest that informal jobs were crucial in keeping individuals away from criminal activities, despite the fact that they might be of lower quality when compared to those in the formal sector. If this is indeed the case, stricter enforcement of labor regulations could exacerbate the response of crime to adverse economic shocks. Put differently, our results suggest that more lax enforcement of labor regulations – and active labor market policies – may help to prevent increases in crime during economic downturns.

Prof Sergey Lychagin (Central European University) His research interests include anything to do with structural microeconomics: for example measuring the effects of institutional changes on productivity.

Keynote speaker: Prof. Deborah Bräutigam (John Hopkins University’s SAIS-CARI)Alongside a keynote address and plenary panels, there will be parallel sessions where academics will present their empirical research. For these sessions, we will be looking for contributions on – though not limited to – such topics as: aid, trade, foreign direct investment, industrialisation, public debt, Belt and Road Initiative, environmental sustainability, political economy, governance and institutions.

The call for papers will open in July 2019 and close in October 2019. Further details will be available on the CSAE website in due course (https://www.csae.ox.ac.uk/). Final decisions will be made by December 2019. Priority will be given to full papers. Funding may be available for scholars from African countries and China.

On behalf of UK Research and Innovation (UKRI), ESRC, NERC and Innovate UK are pleased to invite applications for the ‘UKRI-GCRF Sustainable Energy and International Development: Beyond Technology’ call. Funding has been allocated from the Global Challenges Research Fund (GCRF), which is a £1.5 billion fund to support cutting-edge research and innovation which addresses the problems faced by developing countries.

This call expects to contribute to the achievement of Sustainable Development Goal 7and the development of the most disadvantaged. It will fund cutting-edge inter-disciplinary research projects that focus on at least two of the following priority areas:

Each grant should reach across the physical sciences, arts and humanities, social and environmental sciences by, for example, drawing on socio-technical and whole systems integration research approaches.

Applicants from all disciplines are welcome to apply. All proposals will have to make a clear case for how they comply with ODA guidelines.

A short Expression of Interest should be completed by those intending to submit to this call by 16:00 (UK time) on Wednesday 15 May 2019.

Full proposals should be submitted via the Joint Electronic Submission system (Je-S) by 16:00 (UK time) on Wednesday 10 July 2019. Projects should commence between 1 February 2020 and 1 April 2020.

For any queries, please refer to the FAQs document above in the first instance. Questions not answered in the FAQs should be sent to:

Enquiries relating to technical aspects of the Je-S form should be addressed to:

This position offers the opportunity to join a well-established and multidisciplinary team and to provide a leadership role in the development of research programmes in environmental economics. This will include the development of modelling approaches and the use of valuation methods associated with environmental changes in rural areas. The post holder will be expected to develop innovative approaches to this area of research.

Further appointments may be made from this competition should AFBI positions become vacant which have similar duties and responsibilities.

For more detailed information and to apply, please go to www.nicsrecruitment.org.uk

Alternatively, an application pack can be requested by contacting:

All requests must include your name, address and reference number IRC240021

Completed application forms must be returned to arrive not later than 12:00 noon (UK time) on Friday 3rd May 2019.

Applications are particularly welcomed from Roman Catholics and Females as these groups are currently under-represented within AFBI.

AFBI is an Equal Opportunities Employer

The German Development Institute / Deutsches Institut für Entwicklungspolitik (DIE) is one of the leading research institutes on development policy. Through excellent research, policy advice and training, the Institute contributes to finding solutions to global challenges.

In the research program “Transformation of economic and social systems” we seek as soon as possible, one

As a member of an interdisciplinary team, the economist should contribute through research and policy advice to international debates on the transformation of the world economy in the context of sustainable development. The research expertise should lie in the areas of international finance, international trade, or international macroeconomics, with a focus on developing countries. We are looking for a researcher with a Ph.D who is able to formulate innovative policy advice on the basis of excellent research. The position is limited until April 30th, 2021.

In the case of equal qualification, physically challenged persons will be given preference.

When applying, please note the position number 2019-B-02. Applications, including all necessary documents (motivation letter, CV, relevant certificates), should be submitted exclusively by application platform by April, 23rd, 2019.