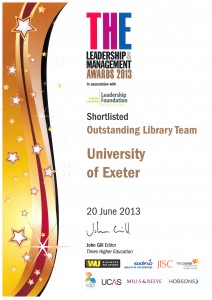 It was with great pride that Exeter University Library were nominated this year in the Times Higher Education Leadership and Management’s Award (Thelma’s) for “Outstanding Library Team” of the Year 2013.

Though we were not successful we are very proud to have been in the running and three of our staff attended the event held at the Grosvenor House Hotel, London on 20th June, 2013.