Women in Translation month is in full swing, and following on from the individual book recommendations I gave in an earlier post, today I want to focus on authors. I love it when publishing houses champion an author rather than a single book, and when translators get to work on several books by the same author, forming a relationship and bringing a whole body of work into translation – especially when this oeuvre is constantly growing. So here are my suggestions of five contemporary women writers whose work it’s worth diving into.

(Please note that I refer here to UK editions of these books, though many are also published by US publishing houses) 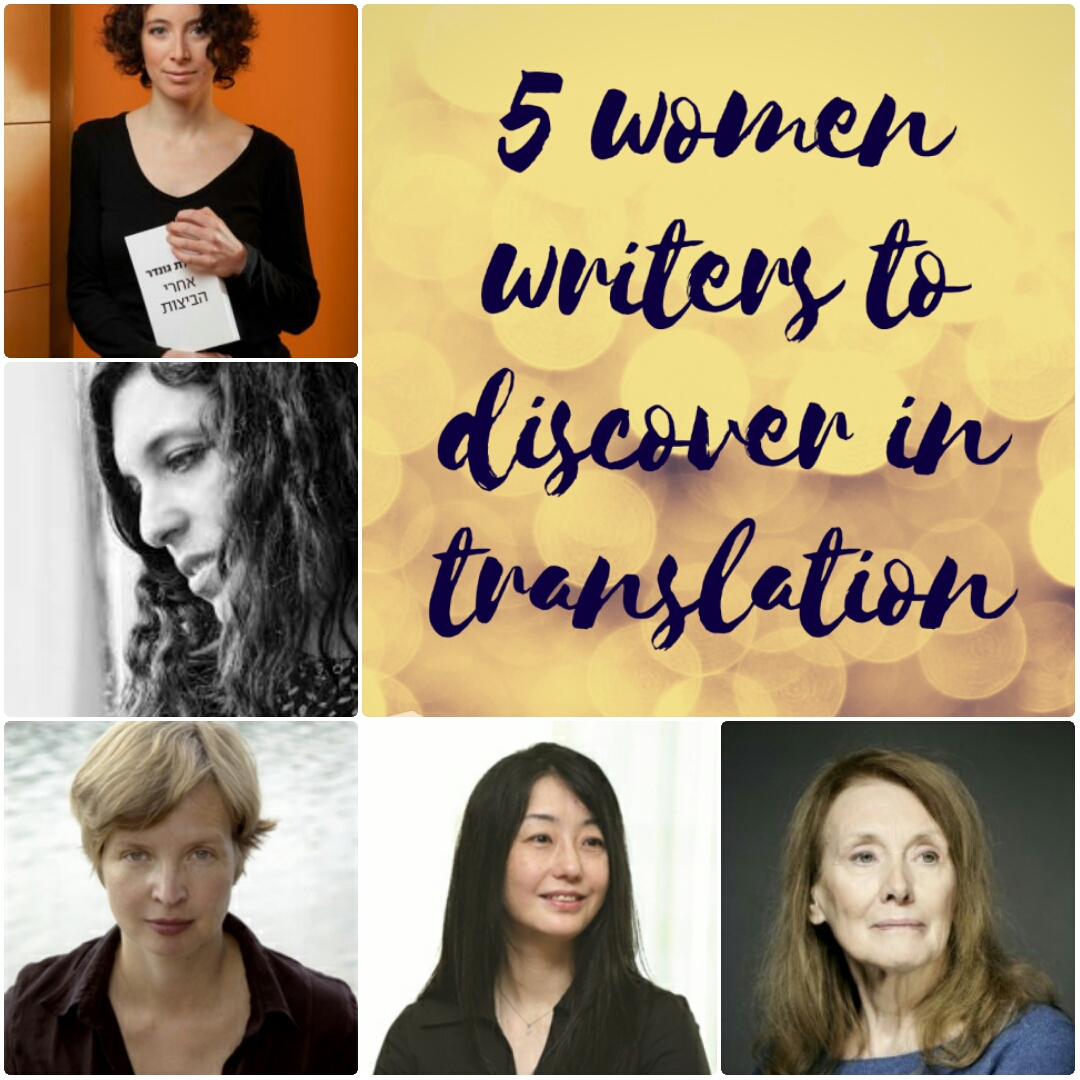 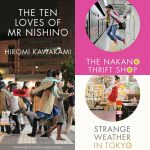 Japanese author Hiromi Kawakami is known for her offbeat love stories, writing relationships that are unusual, unexpected, and in many cases delightfully awkward. Published by Portobello Books, Kawakami’s portfolio was taken on by parent company Granta Books when they shuttered the Portobello imprint in January 2019. Her current translator is Allison Markin Powell, who communicates Kawakami’s whimsy perfectly.

Strange Weather in Tokyo was Kawakami’s first work to be published in Markin Powell’s translation, and has received widespread critical acclaim. It recounts the will-they-won’t-they relationship of a thirty-something woman and her much older former teacher: it’s a great unconventional romance story, though I didn’t connect with it as deeply as most people seemed to until the final page, in which the relevance of the US title (The Briefcase) becomes apparent in a way that knocked me for six.

Call me contrary, but though Strange Weather in Tokyo is worth reading, I preferred Kawakami’s  follow-up, The Nakano Thrift Shop. This follows the lives and entangled relationships of four people who work in a Tokyo thrift shop; the contemporary star-crossed young lovers, the fallibility of Mr Nakano himself, and the eccentricity of his sister are sublimely awkward.

The Ten Loves of Mr Nishino is Kawakami’s latest and much anticipated release, and offers connected short stories of ten women who have all loved the same man at different stages of his life. Through their reflections, a portrait of Mr Nishino emerges that is always shifting and never complete, and this innovative way of understanding a central character is as accomplished as I’d come to expect from the Kawakami-Markin Powell collaboration. 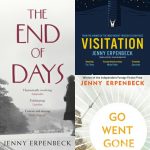 Jenny Erpenbeck writes in German, and won the Independent Foreign Fiction prize in 2015 for her sweeping novel The End of Days. Her work is deeply embedded in German history, from the ravages of the twentieth century to the modern-day refugee crisis; Susan Bernofsky translates Erpenbeck with great sensitivity and depth.

The End of Days is Erpenbeck’s best-known work, and is a historical saga with a difference, recounting the many ways in which a life could have been lived (and died) in the twentieth century. At its heart are profound and unsettling questions of the difference one life can make, and the impact one choice in one moment has on not just on an individual life, but on history. A protagonist who is unnamed for much of the novel lives through fixed historical events and more arbitrary personal ones, that may or may not all be leading to the same fate in a different way.

The progression of German history through the twentieth century echoes Erpenbeck’s earlier work Visitation, which was the only one of her novels I struggled to appreciate. Whereas in The End of Days history is viewed through a single character who lives (and dies, and lives again) through the events, in Visitation the focus is on a house by a lake in Brandenburg, which sees inhabitants (including a family of Jews and a regiment of soldiers) come and go throughout the years, and stands as a silent witness to the atrocities of the twentieth century.

My admiration for Erpenbeck and Bernofsky returned full throttle with Go Went Gone, a moving account of the refugee crisis in Berlin. Retired university professor Richard observes a makeshift camp in Oranienplatz, and strikes up an unexpected relationship with the refugees as he attempts to understand their plight. The relationship between a relatively privileged European and a group of displaced people is sensitively developed, but even more interesting are the reflections on nation and nationalism; the questions Erpenbeck raises about borders make their way into English at a particularly apposite time, confirming her status as an important writer of our times.

Erpenbeck has also published The Old Child and The Book of Words, both translated by Bernofsky and published by Portobello/Granta. 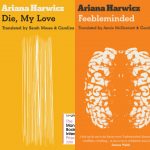 Ariana Harwicz was one of the five Argentine authors that Charco Press launched with in 2017. She writes frenzied and disturbing accounts of women’s experience on the edge of reason, and is an explosive and innovative writer. Charco co-director Carolina Orloff has been involved in the translation of all of Harwicz’s books, working with Sarah Moses on Die, My Love and with Annie McDermott on Feebleminded and the forthcoming Precocious.

The women in Harwicz’s narrative universe are “in the prime of life and in freefall” (Die, My Love): Die, My Love was longlisted for the Man Booker International prize in 2018, and is an extraordinary debut in which a woman living in the French countryside struggles with maternity and with a man who can never be all she wants him to be. On its initial release in Spanish, critics rushed to categorise Die, My Love as a narrative of post-natal depression, but it is so much more than this: it is a challenge to society, a voice that refuses to be silenced, and a turbulent account of an outsider’s experience with no neat solutions.

Feebleminded returns to many of the themes of Die, My Love, and if possible is even more intense. The narrator and her mother live in a chaotic household in the countryside, constantly at loggerheads with one another but unable to exist apart. The prose is sparse and violent, but rhythmic, viscerally poetic, and full of striking images which are rendered beautifully in the translation. Contrasts abound in Feebleminded: love is perversion, tenderness is violence, lucidity is madness, and the basic premise rests on the following question: could a person want something so badly they destroy it? Harwicz’s prose is electrifying and addictive, and we can look forward to her third translated novel, Precocious, coming from Charco in 2020.

*Ariana Harwicz will be in conversation with Carolina Orloff and Annie McDermott at the Translating Women conference in London on 1 November 2019; visit the conference webpage for details and booking links!* 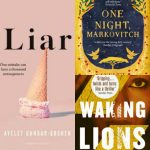 Israeli author Ayelet Gundar-Goshen writes page-turning narratives that offer a painfully acute observation of human fallibility and experience. Translator Sondra Silverston is perfectly matched to Gundar-Goshen’s wry whimsy, and all of these books are a treat to read. If you’re after a good story, you’re in safe hands here: Gundar-Goshen’s storytelling is a thing of beauty, as is Silverston’s translation.

Gundar-Goshen’s debut One Night, Markovitch is a modern-day fable that follows the lives of two friends, the “gloriously average” anti-hero Yaacov Markovitch and his larger-than-life best friend Zeev Feinberg. Thanks to Zeev’s sexual exploits with the butcher’s wife, the two men have to flee their village in Eretz Israel and make marriages of convenience in Europe. Once back in Israel the new couples are to divorce, but Markovitch falls in love with his new wife and refuses to let her go – a decision that sets in motion a chain of events unfolding over decades and weaving together the destiny of all the characters. The narrative develops in unexpected ways, with retribution never quite falling where you think it will.

Gundar-Goshen followed One Night, Markovitch with Waking Lions, a tale of secrets, lies, extortion and atonement. Dr Eitan Green is a good man who did a bad thing: speeding along a deserted moonlit road, he hit and killed a man. His life is then torn between two women: his wife, Liat, a senior detective in the Israeli police with a keen sense of what is right, and Sirkit, a taciturn Eritrean who sweeps floors for a living. Sirkit is the wife of the man Eitan killed: she saw what happened, and she comes to demand atonement. Fast-paced and full of suspense, this novel is not to be missed.

Liar was Gundar-Goshen’s latest release in translation, and is a piercing look at how one unfortunate decision or instinct can ruin lives. 17-year-old Nofar is desperate to escape the anonymity of being unexceptional, and when a washed-up reality TV star insults her outside the ice cream parlour where she works, she lets out all her rage in a scream that will change her life: from this moment on, Nofar is caught up in a web of deceit from which no-one will emerge unscathed. Gundar-Goshen deftly blends humour and pathos in all her works, and is a writer I highly recommend. 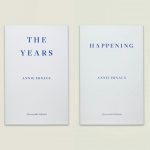 A literary institution in France, Annie Ernaux has only recently come to publication in the UK thanks to Fitzcarraldo Editions. Ernaux writes primarily from her own experience, and engages with issues that shaped her life and the lives of many other women throughout the second half of the twentieth century.

The Years was the first of Ernaux’s books to appear in translation (by Alison L. Strayer) from publisher Fitzcarraldo Editions, and was released in 2018. This monumental book is described as a “collective autobiography” of French twentieth-century cultural history: filtered through the experience of a woman we see through photographs, and who we know to be Ernaux, The Years represents her imperative to bear witness before “all the images (…) fade”.

Ernaux’s second English-language release was Happening (translated by Tanya Leslie) earlier this year; this short novella reconstructs Ernaux’s experience of a clandestine abortion in 1963, supplementing her memory of events with fragments of a journal she kept at the time. Through the public articulation of her experience, Ernaux fulfills a sense of moral responsibility to hold a misogynist social system up to justice. It’s not an easy read, but it is a fearless and necessary one: In this time of desensitization and indifference we need books like Happening, and it begs to be experienced, even if not “enjoyed” as such.

I Remain in Darkness is the next of Ernaux’s books that Fitzcarraldo will publish later this year (also translated by Leslie). I read this in French many years ago – it’s another autobiographical piece, but this time focuses on Ernaux’s elderly mother, dying and already written off by the healthcare system. Expect painful insights and more no-holds-barred depictions of human frailty.