Singer in the Night is the second novel by Croatian author Olja Savičević; the narrator tells us that it is “a story about life”, and encompassed within this is a story about love and memory, and their attendant joys and losses. Both hilarious and profound, this book is a reflection on the ways we love, the paths we choose, the exhilaration and peril of being open to new experiences and the stagnation and dessication of choosing safety and banality over desire and dreams. 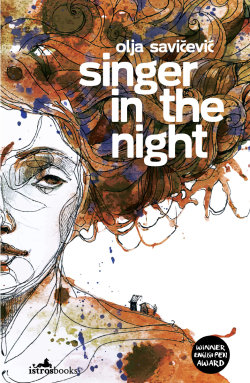 Singer in the Night is mostly narrated by Clementine, an eccentric soap opera scriptwriter. Clementine is a “blonde orange” with silicon lips and whitened teeth who gave up on art and followed money and popularity, for “people needed a lot of cheap, quick emotion, they needed it in greater quantities than it was possible to produce … Let’s face it, gunk has moved the vast majority of people and filled their thoughts probably more than the best work of art ever could.” Clementine hasn’t seen her ex-husband – the elusive poet Nightingale – in some time, but she is jolted into going in search of him when he disappears after leaving a series of letters for his neighbours in Split. The letters have been written in response to a bout of loud lovemaking in one of the buildings on the street; in this hot summer with all the windows open, the sounds of passion have carried, and inspired Nightingale to write from a variety of perspectives about love. There is no trace of Nightingale in Split; he has not been in contact with his friends and family, and even the yacht that he still co-owns with Clementine has been abandoned. Cue Clementine climbing into her golden convertible car and embarking on an unforgettable journey from Slovenia through Croatia to Bosnia in search of her lost love. Along the way she recounts her memories, which she sees “as though through polished glass”, and which are interspersed with the letters from Nightingale.

Nightingale’s letters delight in the possibilities of language; he is “a ruler over words and colours” who explores the breadth of lyric expression with his shrewd observations about society and human nature. Though they are ostensibly about the lovers keeping the street awake on the hot summer nights, this is really just a pretext to talk about love (“where the heart is not free there cannot be love”), resistance (“Why would a child write if it was well?”), politics (“People constantly sing about freedom, but at the same time with all their limbs, including their tongue, they stay on the border”), and a range of other musings on war, (anti)heroism, contingency, and life in all its chaos.

While Nightingale’s missives are poetically crafted, there are occasionally some unexpected turns of phrase in Clementine’s monologue. Given how distinctive the writing style is and how renowned Celia Hawkesworth is, I rather suspect they may have been there in the original too; I found the extended use of the imperative mood quite marked, but I can’t imagine that “Let mother come home soon” was chosen over, say, “I wish mother would come home soon” or “if only mother would come home soon” without a lot of thought, or that “starkers people” was chosen as a childlike colloquialism for naturists without deliberation over its unusualness. Clementine is a unique character, and so I suppose it follows that she has a unique way of speaking, which Hawkesworth conveys ably in the translation. The repeated use of “my dear” creates intimacy and hints at Clementine’s raconteur personality; it is an affected way of speaking that indicates the milieu in which she operates but also a form of self-address, as she is recording her voice for herself. For Clementine, we discover, is suffering from a progressive memory loss, and does not want to forget the detail of her life –particularly not its joys and its passions – and for this she needs to evoke Nightingale, the lost love of her life.

The final section of the novel is the one in which Nightingale finally speaks as a character, rather than through his letters. We find out why he left and how he perceives Clementine, as well as more detail on his life philosophies. But Clementine’s own story is also full of thought-provoking pathos: Savičević is a socially engaged writer, aware that “it’s the duty of anyone living in a dystopia to create a utopia.” Her narrative calls into question the world that she and her contemporaries inherited, Clementine’s personal tragedy mirroring the historical amnesia that post-war societies slip into, both encompassed in a phrase which could sum up the entire book: “what keeps us going is memory.”

If the narrative is disorientating at times, this is indicative of Clementine’s own confusion, her road trip an apt metaphor for the narrative ride she takes us on. Her outpourings fill the silences of a relationship and a youth that have faded away, and are populated by a cast of eccentric supporting characters, from the fearless, hairless Helanka and her twin daughters Billy Goat and Arrow to Clementine’s platonic “comrade” second husband Bert and her failed movie-mogul-turned producer Kalemengo. Part road trip, part social comment, part metaphor and part love story, above all this is an exploration of memory, with some fittingly memorable twists along the way. It is not Nightingale that Clementine is moving towards on this turbulent journey, but her past, her memories, and herself. This reflection on the fragility of memory – both personal and historical – is a poignant, innovative and politically engaged book that deserves attention.

Olja Savičević will be at the Edinburgh Literary Festival on Sunday 18 August.

Review copy of Singer in the Night provided by Istros Books.