Antonia Lloyd-Jones is a prizewinning translator from Polish, and recipient of the Transatlantyk award for the most outstanding promoter of Polish literature abroad (awarded in 2018). She is a long-term translator of Nobel Prize in Literature laureate Olga Tokarczuk, and her translation of Tokarczuk’s Drive Your Plow Over the Bones of the Dead (Fitzcarraldo Editions, 2018) is currently shortlisted for the Warwick Prize for Women in Translation. Other recent published translations include Żanna Słoniowska’s The House with the Stained Glass Window (Maclehose Press, 2018), and Mrs Mohr Goes Missing by Maryla Szymiczkowa (pseudonym of authorial duo Jacek Dehnel and Piotr Tarczynski, Oneworld Books, 2019). She also works as a mentor for emerging translators, and has served as co-chair of the Translators Association. 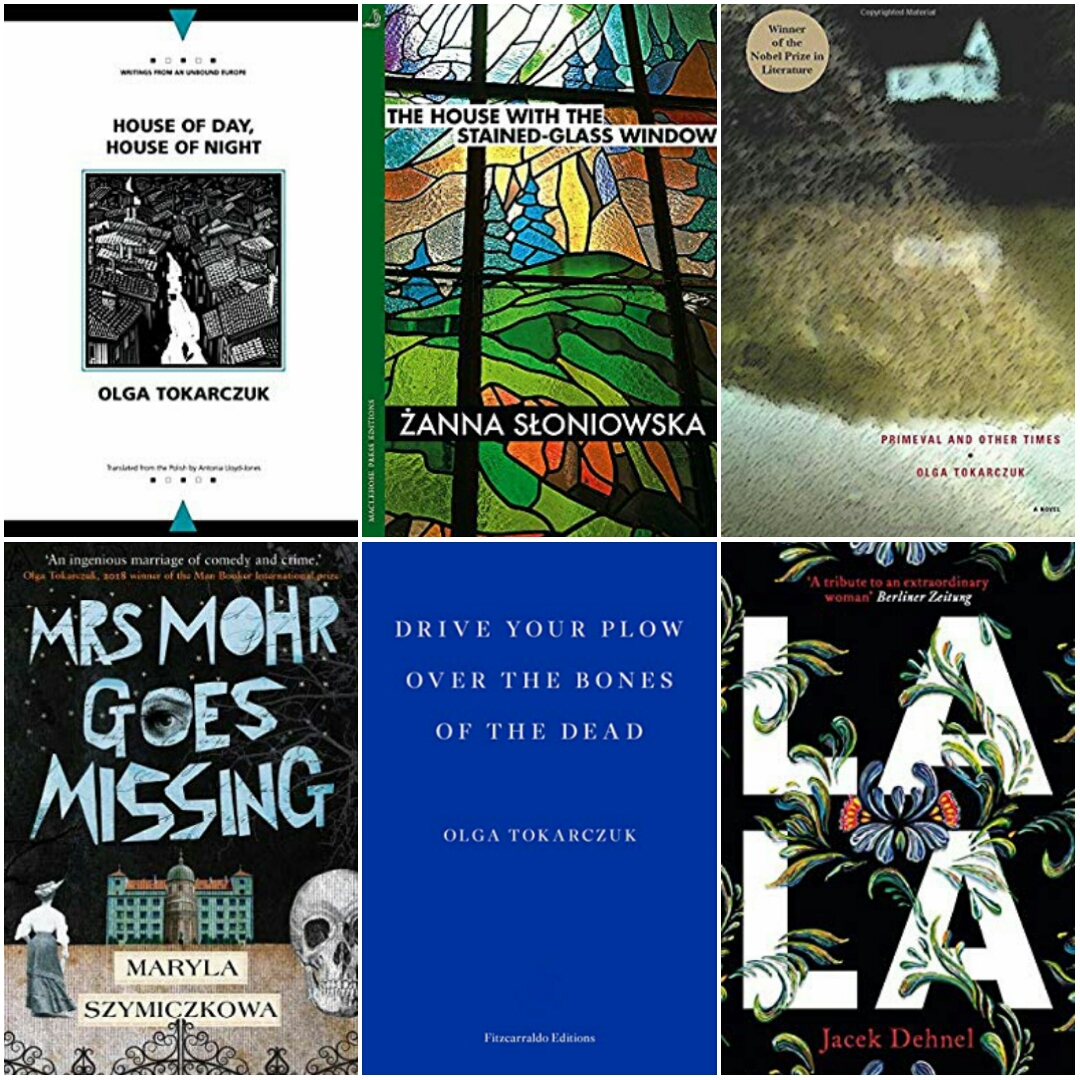 You are a prolific translator from Polish, and ambassador for Polish literature. How do you go about finding new works to translate?

I translate mostly contemporary literature, so I try to keep up with new works released in Poland. I read certain journals, I listen to radio interview programmes, I go to literary festivals in Poland, and I’m in touch with a lot of publishers and authors. I try to select things that will sell, and to think from a publisher’s point of view. Of course quality is their top priority, but they also have to consider who will read a book, who will buy it, and so if I want to persuade a publisher to take on a book that they can’t read themselves, I’ve got to think in those terms.

What is the balance between pitches and commissions, and how do you choose publishers to pitch your translations to?

Commissions are rare, because Polish gets consigned to a ghetto of “minority languages” (a phrase I dislike); it’s seen as difficult, remote, and not quite part of “our” Europe. So inevitably the translator who has dedicated him or herself to learning this particular language has to act as an agent if he or she wants a book to come out in English. This is partly because Polish literature doesn’t have a strong agenting system as some literatures do; mostly it’s foreign rights representatives at publishing houses who are selling rights, and sometimes authors themselves. I prepare material for my pitches very carefully; I put together a book report, information about the author, and an assessment of who is going to read this and why I think it should be published, to persuade the publishers that it is worth considering. I include a 20-page sample translation, and choose the target publisher by researching what they’re doing. I pitch carefully, even to individual editors, because they have individual tastes. Inevitably I’m geared towards the small independents because they’re the ones who are geared towards publishing translated literature.

One of your recent translations (Olga Tokarczuk, Drive Your Plow Over the Bones of the Dead) was shortlisted for the Man Booker International prize. How has being part of this major prize helped to promote your work as a translator, and do you feel that the importance of translators is represented in media coverage of the prize?

This particular prize is focussed on equality for the translator and the author, and so the organisers put a magnificent amount of work into promoting the translator as well as the author. That’s very unusual, and they’ve done a great job; they’ve given us a chance to speak, and included us in press coverage very well. This is what ought to be happening, because there’s a big issue about translators’ visibility. Of course you want to see your name on the reviews; I think of myself not as a co-author of the book but as co-author of the translation. I don’t mind not being on the cover, but my name should be on the title page and it should be mentioned in press coverage. You take a responsibility in translation, seeing what the author has done and then reflecting that, and so you should take some of the credit too. One reason why the translator’s name should be visible is that we’re still having to change the imbalance in attitude towards books that are published in English and books published in translation. People have a kind of allergy to things foreign. And look what’s happening to our world: there are all sorts of barriers going up, but I feel I’m a barrier remover, I want people to feel they can read anything from everywhere, and not have a mindset that says ‘Oh, that’s foreign, so it’s not for me’ or ‘That’s translated, so it can’t be any good.’ Unfortunately that attitude does exist, a lot of people think like that without even being aware of it. So the more you normalise translated literature by having the translator’s name mentioned alongside the author’s, the more it simply becomes an accepted part of literature. And that should be the normal state of affairs. I feel that if we understand another culture, if we read its books, watch its films and so on, then we find out that we’re all very much the same. And to me that’s important, it’s something we need in today’s world. It does feel like chipping away at a mountain with a teaspoon when you see what’s happening politically, but that’s what I feel my life is about.

I imagine that it’s partly to do with the balance of publishing in the original language, and that’s where the bias is. It may not necessarily be to do with what translators are picking or what publishers are picking; it may have a lot to do with the balance of publishing in other countries. Publishing as a profession doesn’t have a significant gender imbalance, which is also relevant because it’s part of a chain, but there is bias against women in all sorts of ways culturally. This is certainly the case in Poland, where there’s retrogression because of a very conservative, very traditional and church-influenced government that has set things back for women. So they’re contending with some unhelpful and very traditional attitudes. But within literature there are a lot of women being published, and across a very wide range of writing.

There have been some excellent initiatives. I admire Meytal Radzinski and Katy Derbyshire, who have put a lot of work into investigating the relevant statistics. It shouldn’t be necessary to engage in positive discrimination, but there are cases where it is necessary: it makes people – especially those who have unconscious biases – think about it. So the Warwick Prize for Women in Translation, and initiatives such as And Other Stories having a Year of Publishing Women – all of these things wake people up. And even people like me need to be woken up, and focus on seeking out good books by women to translate. My pitching of Żanna Słoniowska’s The House with the Stained Glass Window to Maclehose was part of that waking up: it was good to get another woman writer out there, but I didn’t set out consciously to find a female author. I was looking, I found that book, and it has been successful, but we could all make more conscious choices.

You are involved in a number of networks and mentoring programmes; to what extent would you consider their work as activist?

Ultimately our work is about getting people to know each other and to understand each other’s cultures, and in doing so to make the world a better and more interesting place. When I started out thirty years ago translators were much less visible, so I’m very happy that I’ve been able to be part of a shift in that respect. I made this my full-time career twenty years ago, and I found that there were some amazing people I could join forces with. I think it’s very important that as translators we understand our rights, that we are an empowered community, because we all have the same ultimate goal. It’s important for us to share advice, and to help each other with the practicalities of being a professional literary translator. Danny (Hahn) always defines it very well: he says that translation is a different thing from being a translator. Being a translator means being an active part of that community, and helping emerging translators. It’s a constant learning process, but I think it’s very important that those of us who have some experience can pass on our knowledge to younger translators.

You work tirelessly to promote Polish literature and culture. Do you think that Polish women writers are well represented in translated literature, or that there is an increased openness towards Polish literature? What or who would you like to see gain greater recognition?

We had a boost with the London Book Fair having Poland as the guest country in 2017, and then Olga (Tokarczuk) won the Man Booker International prize in 2018 [note: since the time of this interview, Tokarczuk also received the delayed 2018 Nobel Prize in Literature], so we had a bit of a crest of a wave. I’m slightly nervous that the wave might be coming down again now, but having Poland as the guest country at London Book Fair was great because publishers came to look at what Polish literature had to offer and it did wake people up. That took years to be put in place, with a dedicated team of people putting a great deal of effort into it. And the British Council has also done an amazing job for us. There are not very many contemporary Polish women writers being translated; there are quite a lot of female poets who have been translated, but there is still a lot to do. There is not nearly enough, and some of those who have been translated should be much better known. Children’s and Young Adult books should be translated too: Danny (Hahn) has been a pioneer in this respect, but there’s a wealth of undiscovered works. Children should be growing up seeing how big the world is. 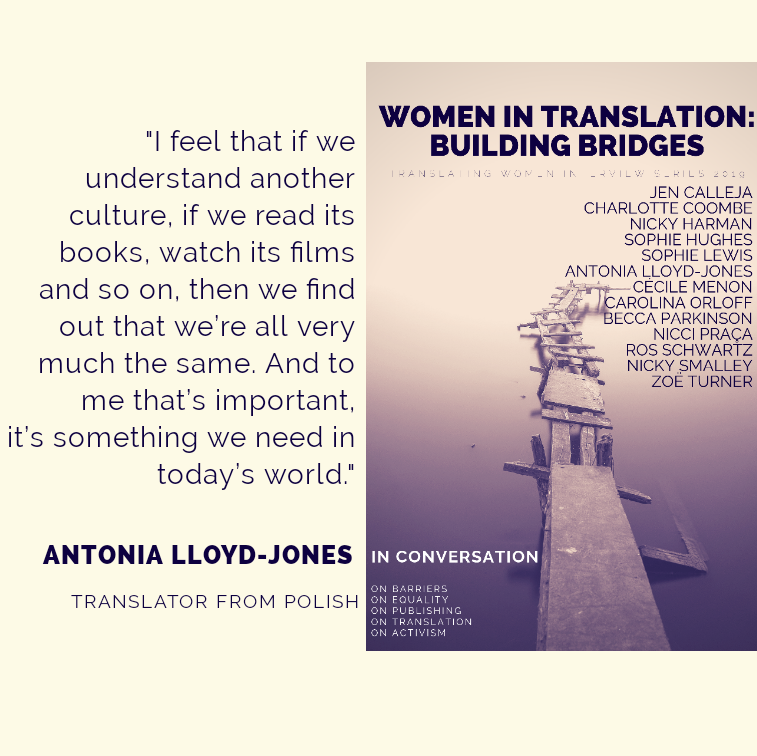 You may also be interested in the following posts:

Review of Drive Your Plow Over the Bones of the Dead

The Nobel Prize in Literature: Be More Olga