Today’s post is a little different from my usual ones, because I want to talk to you about a translated text coming out next week… that itself isn’t so rare around here, but the big difference is that this time I’m the translator! I wanted to share with you the story of how this book has made its way into English, and the reasons why I find it so moving and so special. 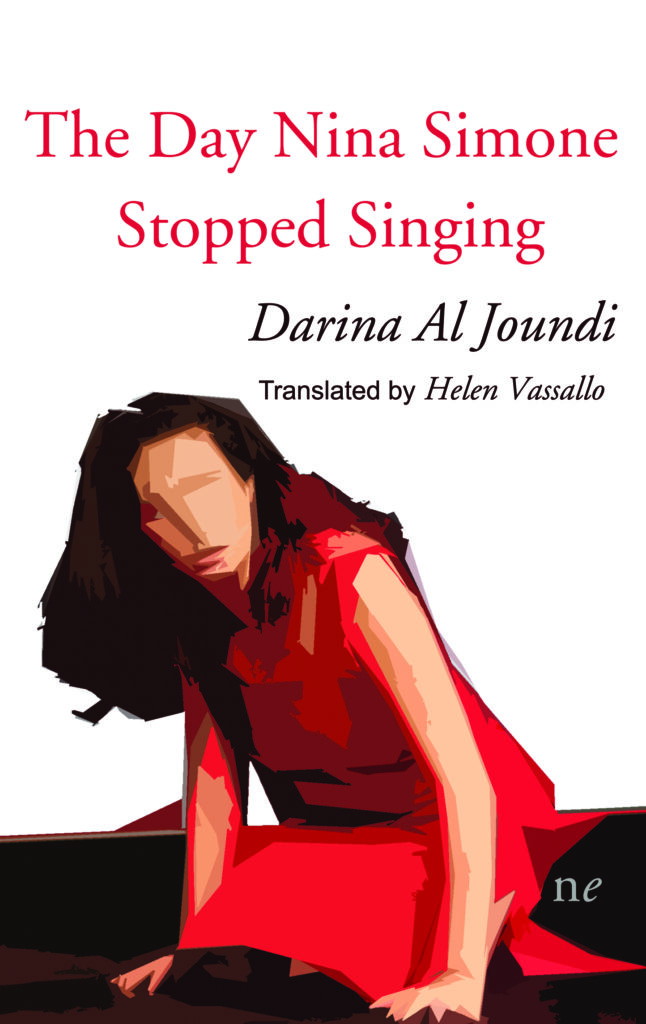 In 2008 I was living in Paris during a period of research leave – it was a difficult time that I don’t particularly enjoy remembering, but there was one thing that I’ll never forget: discovering Darina Al Joundi’s play Le Jour où Nina Simone a cessé de chanter (The Day Nina Simone Stopped Singing). It nearly didn’t happen: one evening I was walking down the rue de la Roquette towards Bastille at a particularly brisk pace – late to meet a friend, and dodging in and out of crowds. So when someone stepped out towards me to offer me a freebie arts magazine, I had neither the time nor the presence of mind to politely decline as I normally would. I grabbed the magazine – more than anything to remove it from my path and keep single-mindedly ducking and weaving my way towards Bastille – and stuffed it into my bag.

The next morning over breakfast, I had nothing I could read with one hand (this was Life Before Smartphones), and remembered the magazine. I flicked through it while drinking my coffee, and was struck by a picture of a woman in a red dress, illuminated by a candle, gazing intensely and defiantly out at me with tears in her eyes. I read the blurb:

On the evening of her father’s funeral, while his family recites suras from the Qur’an, Noun interrupts the ceremony. Staying true to the memory of her father, a writer, journalist and freedom fighter, she decides to put an end to this memorial and carry out his last wish: to have Nina Simone’s ‘Sinnerman’ played at his funeral. Noun locks herself in a room with her father’s body and spends one last evening with him before her family break down the door and make her face the consequences of her actions. Looking back on her experience of the civil war in Lebanon, Noun recalls the straitjacket of religion, the weight of prejudice, and her struggle against a society where men are all-powerful and women are denied freedom of speech.

As I walked into the theatre with my friend, I was taken aback to see the actress, Darina Al Joundi, sitting on the floor of the stage in her red dress, smiling at the audience as we entered and took our seats. It was eerily quiet: hard to chat when the person you’ve come to see perform is sitting there smiling at you. The first line took me by surprise, and then the lights went down. When they came up, the actress was standing in the middle of the stage, trying to get out some words but choking. I inwardly rolled my eyes, thinking this was going to be over the top, mentally preparing my apology to my friend. And then she blurted out:

“Mon père est mort le jour où il a cru qu’il n’avait plus d’histoires à me raconter” (“My father died the day he thought he had no more stories to tell me”).

I didn’t take my eyes off her for the next hour and twenty minutes. Darina was playing Noun, a character based on her own experience of growing up in Beirut with a politically dissident and “fervently secular” father who wanted to raise his daughters to be free women in a time and place where women were not free.

Standing in a hand-drawn square of black chalk, Noun spat it all out: her childhood, marked by political exile and religious intransigence. Her adolescence, unfolding as F-16s flew over Beirut. Her first sexual experiences, as violent as the destruction going on around her. Her losses and near misses as her beloved home city tore itself apart in civil war. Her father’s death, and with it the loss of his protection. The price she paid for being a woman who did not obey the rules.

It’s no exaggeration to say it was a pivotal evening in my life. Darina was signing books after the show (she had adapted the play into a novel, published by Actes Sud and later in English translation by Marolijn de Jager for The Feminist Press), and I found myself inarticulately stammering how moved I was by her story and performance. The generosity of her response is a quality I have grown to love in her in the 14 years during which we have become friends. At first I sent her a hesitant email, having decided to teach her book on one of my undergraduate courses. Would she be interested in coming to give a talk to the students?

It was the first of many wonderful encounters I’ve had with Darina. I was there at the first public reading of Ma Marseillaise (Marseillaise My Way), the sequel to The Day Nina Simone Stopped Singing, and at her last ever Paris performance of Nina. Then in 2015 I was invited by Lucy Phelps, an actor and director who had first seen Darina perform at the Avignon festival in 2007, to do a Q&A with Darina at a public performance of Nina in French in London. Just beforehand I had asked Darina if there was a translation in the works for Ma Marseillaise. When we met backstage she said to me: I want you to translate it, but not just that. Nina too.

There was no translation of the play, only of the novel. The play was published separately (by Avant-Scène Théâtre), and rights were available. In 2016 I set to work.

The conversations I had about it with Darina were intense and often hilarious. She wondered why I hadn’t used the f-word. Because it wasn’t there in the original, I said. Because it doesn’t exist in French, she answered. Put the f-word in! I wish I’d had f**k in French.

In 2017 I sent a pitch to a publishing house. They were keen, but didn’t want theatre, and it didn’t go any further. In 2019 I sent it to a second, and they put it forward to an editorial meeting but were worried it would overlap with the novel (it doesn’t) and decided not to proceed. And so the years passed.

In 2021 I received a request to review a book, You’re Not Dying by Kathrin Schmidt, translated from German by Christina Les. I looked up the press (I always do this when approached for the first time, before agreeing to a review). Naked Eye Publishing was committed to developing a new focus on translated literature, and was kicking off with a woman writer. So I said yes to the review. While reading You’re Not Dying, I saw that Darina’s work could fit with the press’s aims, and so sent in a pitch.

A year later, here they are. I just received the physical copies, and sent some straight to Darina. I can’t wait to share them with you too.

The Day Nina Simone Stopped Singing by Darina Al Joundi is coming on 10 March 2022, and can be ordered from Foyles, Waterstones and other booksellers.

Marseillaise My Way will follow on 21 April 2022. Watch this space…