Translated from German by Sue Vickerman

It’s over. Don’t go there. is the second title by Kathrin Schmidt published by Naked Eye, and the second in their new translated literature series. You can read my review of Schmidt’s novel You’re Not Dying (translated by Christina Les) here, but today I want to talk to you about her new collection of short stories. 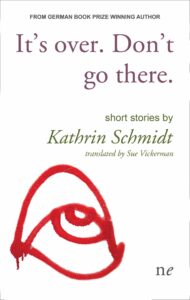 I’ve been coming round to short stories as a genre ever since I fell in love with Margarita García Robayo’s Fish Soup (translated by Charlotte Coombe and reviewed here), and overall this is a cracking collection. As with all short story collections I read, It’s over. Don’t go there. had some that for me were the stand-out ones and others I wasn’t so crazy about, but there were enough really great ones that I didn’t mind an occasional one I didn’t warm to quite so much.

The characters are all on the margins in some way: some are unemployed, others viewed as “useless”, others still rejected or dismissed in some alternative way. The observation of the characters’ (often abject) lives is amusingly pedantic: these are people trying to gain control of their lives, but always being trapped in their social, economic or personal circumstances. Some of them are distinctly unlikeable, others surprisingly endearing despite bodily peculiarities (such as farts that thunder like cannons), and they all have in common an absurdity to their lives (and deaths) that brings humour and warmth to often bleak situations. the stories are steeped in German history yet never feel overly instructive or didactic. In fact, the social comment is often innocently disguised as humour, such as in this observation about a character’s parents: “Meanwhile, our (only-pretending-to-be) ‘cheerfully patriotic’ parents were chewing timidly on their tasteless sandwiches and adhering to a ‘truth’ that went only as far as the country’s borders and then stopped.”

This quotation is an example of Sue Vickerman’s close attention to rhythm and cadence in the translation of frequently very long and multiple-claused sentences. Vickerman also communicates the humour in Schmidt’s work, often with the kind of understatement that works particularly well in English (as in the case of poor Reenie Schnitzel, whose heroic virtue – which her father terrifies her into preserving – “precisely three men had tried, but woefully failed, to claim”). Reenie is one of many women who feature in the collection, and most of them live lives of discontentment, trapped in their stereotypical social roles as dissatisfied wives, reluctant mothers or frustrated virgins. Yet just as Schmidt refrains from making overtly partisan commentaries on German social history, she also leaves these specifically gendered experiences without explicit comment, preferring to convey the abjection of her protagonists’ lives subtly and with (often wicked) humour.

But back to Vickerman’s translation: as well as the perfectly pitched rendering of Schmidt’s understated humour, the lexical variety is particularly striking: the range is supple, with admirable attention to register and context. The crowning glory for me was the ease with which Vickerman managed to slip “chuntering” into one particular story – this is one of my favourite words of all time (tell me I’m not the only one who has favourite words?), and I love that it made an appearance here. Reading it was one of those moments when I chuckled out loud, and reminded me of finding Sophie Hughes’s use of “gobshite” in her translation of Fernanda Melchor’s Hurricane Season – in both cases, the perfect touch to an already excellent translation.

It’s over. Don’t go there. is a varied and interesting collection that nonetheless has common themes of marginalisation and abjection punctuated with flashes of human warmth. I’m confident there’s something in there for everyone to enjoy, and hope you have fun with these darkly funny, irreverent yet gut-punching stories.

Review copy of It’s over. Don’t go there provided by Naked Eye Publishing

Reply on TwitterRetweet on Twitter271Like on Twitter907Twitter
Load More...
Skip to toolbar