Of course our primary aim is to support your research, but did you know we do also stock a number of books geared more towards leisure and recreational reading?  The Library Lounge Collection is shelved  just at the entrance to the Forum Library on level 0. This collection contains a regularly updated selection of books intended to cater to a broad selection of interests and abilities: from graded readers to help international students improve their language skills, to genre-fiction bestsellers, or novels that have been shortlisted for literary awards like the Man Booker or Orange prizes.

Books from this collection can be self-issued in the normal way using the machines located on each floor of the Forum Library. Ask staff you need a hand doing this.

So why not have a browse next time you’re passing by? You might just find your new favourite novel! 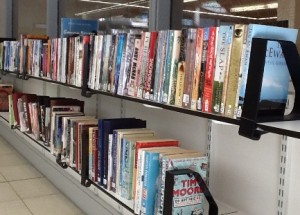 Find these and many more titles in the Library Lounge

Here are a few favourites from this collection chosen by Library staff:

The Oath by Michael Jecks

Michael Jecks is a local author who writes about places we know.  However, as his novels are set in Medieval history we see these towns and cities in a different light.  Michael Jecks’ writing often includes a murder and The Oath is no different.  It’s a more complex book than the others I’ve read by him, as the story is told from the perspectives of different people and eventually they all link up and meet up.  The setting is 1326 – a time of great unrest due to a falling out between King Edward II and Queen Isabella.  Their 14 year old son (who later became King Edward III) is used as a pawn and the knights and peasants find their lives significantly disrupted by the King and Queen’s dispute.  This is a great way to learn about historical events and the lives people lived then, whilst being entertained by an excellent fictional murder mystery.  I left me feeling grateful that however difficult things seem today, it’s a lot easier than living in the 14th Century!

Find it in the Forum Library Lounge at classmark: 823.914 JEC

The Night Circus by Erin Morgenstern

The circus arrives mysteriously and only opens at nightfall. Within are magical displays and an array of fascinating characters.

This is an amazing and imaginative book where you escape and become immersed in the sights, sounds and sensations of a different place. It is a story of illusion, manipulation, love and rivalry. In reading this book you embark on a journey of the imagination and to say any more would detract from the element of magic it contains. All I will say is that I didn’t want the book to end!

Find it in the Forum Library Lounge at classmark: 813.6 MOR

The Kraken Wakes by John Wyndham

Although perhaps better known for The Day of the Triffids or The Midwich Cucoos, The Kraken Wakes is an excellent piece of 1950’s sci fi horror from Wyndham. The novel follows the events of a three-stage clandestine invasion from aliens who settle in deep sea trenches all over the world, from the perspective of a married pair of journalists.

Although I was initially disappointed that there was in fact no Kraken mentioned, this ended up being one of my favourite elements. Wyndham leaves the alien threat almost entirely unexplained (in fact, it is not even explicitly stated that they are aliens) which allows the reader to invent their own form, motive and methods using their imagination- inevitably much more terrifying. I also particularly enjoyed how long it takes the penny to drop for the general public, with the realisation of the threat left to only a few “scare mongers”.

Stylistically the book is somewhat dated, but the themes covered could be from last week. The bad flooding suffered this winter, the Russian-Crimean situation (although in the book Russia is a simple red herring for the west to blame) and the management/manipulation of the media and media ethics are all echoed in the book.

Find it in the Forum Library Lounge at classmark: 828.9/WYN-4

Would you second any of  these suggestions? If you’ve borrowed any of the books from this collection and would like to share a recommendation of your own then we’d love to hear from you. Let us know your favourite Library Lounge titles by commenting here or on the Library Twitter: @ExeterUniLib