Translated from the Italian by Clarissa Botsford (And Other Stories, 2015)

This book represents many ‘firsts’ for me: most notably, it was the first time I’ve read anything about Albania and the first time I’d heard of the tradition of the ‘sworn virgin’. I must confess, the title of this book left me entirely unprepared for what I’d read within (an insouciance for which my own ignorance of what a ‘sworn virgin’ meant was entirely responsible). In case you share this ignorance, or at least to allow me to bask in my newfound knowledge, a ‘sworn virgin’ is, in Albanian tradition, a role taken on by a woman when there is no man present to take charge of the household. The woman wears men’s clothes, socialises with men, behaves like a man – basically, ‘becomes’ a man to uphold the family’s honour. S/he must also remain a virgin. In an interview with the BBC to promote her TV documentary on the same subject, Elvira Dones explained that ‘If she didn’t want that marriage, the only way out so as not to dishonour the family and not to disobey the word of her father was to say ‘no, I’m going to become a man and I will take the oath of eternal virginity’.

An oath of eternal virginity? Cripes. You could be forgiven for thinking that this would make for a dire, turgid, moralising story, but far from it: This brave, absorbing and deeply moving tale offers arresting reflections on selfhood, sacrifice, and what ‘being a woman’ means. 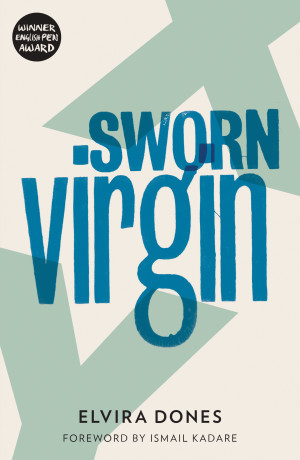 Sworn Virgin is published by And Other Stories, an independent publishing house based in Sheffield which is, as far as I’m aware, the only publishing house to have taken up the challenge to publish only books written by women for ‘The Year of Publishing Women’ in 2018. Each book has a list of names in the back: these are the subscribers who make it possible for And Other Stories to keep publishing ‘the types of stories most publishers consider too risky to take on’ (indeed, in her acknowledgements, Dones praises And Other Stories for believing in translated literature, and extends particular thanks to her translator, Clarissa Botsford, who searched relentlessly for a publishing house because of her profound belief in this book). Sworn Virgin epitomises the position taken by Nicky Smalley of And Other Stories, in a piece she wrote to mark International Women’s Day in 2017: given the odds stacked against translations being published, and against women’s writing being published, if a book written by a woman makes it into translation, you can be pretty sure it’s going to be good. Sworn Virgin is good. It’s more than good. The story is fascinating, the style engaging, the translation virtually irreproachable. In an interview discussing the months she spent translating Dones’s protagonist, Hana, Botsford claims to have ‘inhabited Hana’s skin’, and it shows.

In the novel, Hana Doda becomes a ‘sworn virgin’ at the age of 20, when her Uncle Gjergj (her last relative) is dying. He had wanted to arrange her marriage before his death, so that he would know she was provided for. The insight into the values held in the community described by Dones, and the conflict between the villagers’ way of life and the more metropolitan Hana (a student at university in Tirana), is clear when her uncle tells her that ‘a woman who is not married is worth nothing.’ When she argues in riposte that ‘Women are the same as men’, she is silenced by her uncle’s wrath: ‘Like hell they are. Women are made to serve men and have children. Don’t be a fool!’ Hana refuses wordlessly in the end, simply going to Gjergj’s clothes chest and finding his national uniform, then presenting herself to him as a man. In doing so, her uncle dies with his dignity intact: if Gjergj had forced her to marry against her will, he would have been sad, and died sad. If she had refused, he would have lost pride. With her sacrifice, Hana gave her uncle a few more months of life, and he died brimming with pride. Yet Hana is not presented as a selfless hero(ine): tradition and modernity, right and wrong, love and duty are all blurred, for ‘it was a gesture of love; perhaps it was also a delusion’.

The newly named Mark Doda lives alone in the mountains in the north of Albania for fourteen years, but we learn this and all of Mark/Hana’s past in flashback: the novel opens with Mark’s arrival in Washington DC. He has come to stay with his cousin Lila who had emigrated to America with her husband Shtjefën, and who lives in the suburbs of DC. The ongoing theme of whether ‘gender’ is innate or learned is dealt with subtly and without pontificating: the first section of the novel is understated, as Lila (a brittle believer in the American Dream, with good intentions and a perm that makes her look like a sheep) tries to find a way to make Hana comfortable with being a woman. Lila’s limited grasp of how to bring her cousin’s emotional turmoil to an end is reduced to insisting that Hana buy a pencil skirt in a huge mall, but Hana needs more time and more space than Lila wants to give her: Lila’s superficial notion of ‘aesthetic’ femininity is at odds with Hana’s struggles to understand herself as a woman, and attempts to whitewash the fourteen years that Hana has spent denying herself everything – even her identity.

As well as gender, language is a prominent theme in Sworn Virgin, with Hana trying to learn English, and particularly American slang (with the help of her niece Jonida, adolescent maven of colourful vernacular). It seems appropriate, then, that Sworn Virgin should be published in English, and that Hana should find her voice in the language in which she so desperately wants to feel at home. We also have an insight into the importance of language in Hana’s self-expression, and how language is inextricably bound up with gender: ‘For a while now she’s been unable to balance her thoughts out, and that makes her angry. It’s weird but when she was Mark she was better with words.’ If, in her haste to ‘become’ a woman, Hana is ‘losing something she can’t quite put her finger on’, Botsford understands what this is and offers it back to her, bringing Hana to life in a new language. And what a heroine Hana is: fiercely insecure, endlessly paradoxical, profoundly loveable.

In this beautiful novel, Dones offers a rare literary insight into Albania’s landscape and traditions, and captures perfectly the self-reflection of a person caught between two worlds and the self-doubt of a woman who has spent fourteen years trying to forget herself.

Friends, I'll be away from Twitter for a couple of weeks from tonight. For once I don't have my holiday reads planned out, except this one: THE PEAR FIELD by Nana Ekvtimishvili, translated from Georgian by Elizabeth Heighway for @PeirenePress. See you for #WiTMonth in August!

'When I write myself, and I'm trying to capture a place, I know, deep in my heart, that there's no way of doing it any justice'.

Today in #PENTransmissions: a conversation between 12 members of the @shadow_heroes collective.

Dark, destabilising and addictive: dive into the shifting surfaces of THE FOOL AND OTHER MORAL TALES, clever and subversive stories that shift as the cards dictate their direction.
Anne Serre, tr. Mark Hutchinson, pb. @LesFugitives https://t.co/7yE31wpVPw
#womenintranslation

The Book of Shanghai, available now from all good bookshops! #Shanghai #ShortStories #TranslatedFiction

Reply on TwitterRetweet on Twitter6Like on Twitter15Twitter
Load More...
Skip to toolbar