Borders are on my mind right now. I live on an island, and so the borders of my homeland are physical; more importantly, they are also in the hearts and, recently, on the ballot papers of many of my compatriots. Everything about my identity, my work, and my beliefs rejects borders, crosses them, perhaps even aims to transcend them, and so in a time of great uncertainty, I find comfort in encounters that break down borders: I had two particularly uplifting “Translating Women” encounters recently that I want to share with you today, but I also want to reflect further on connections, crossing borders, and the wise, witty and downright wonderful things we can find in translated women’s writing. 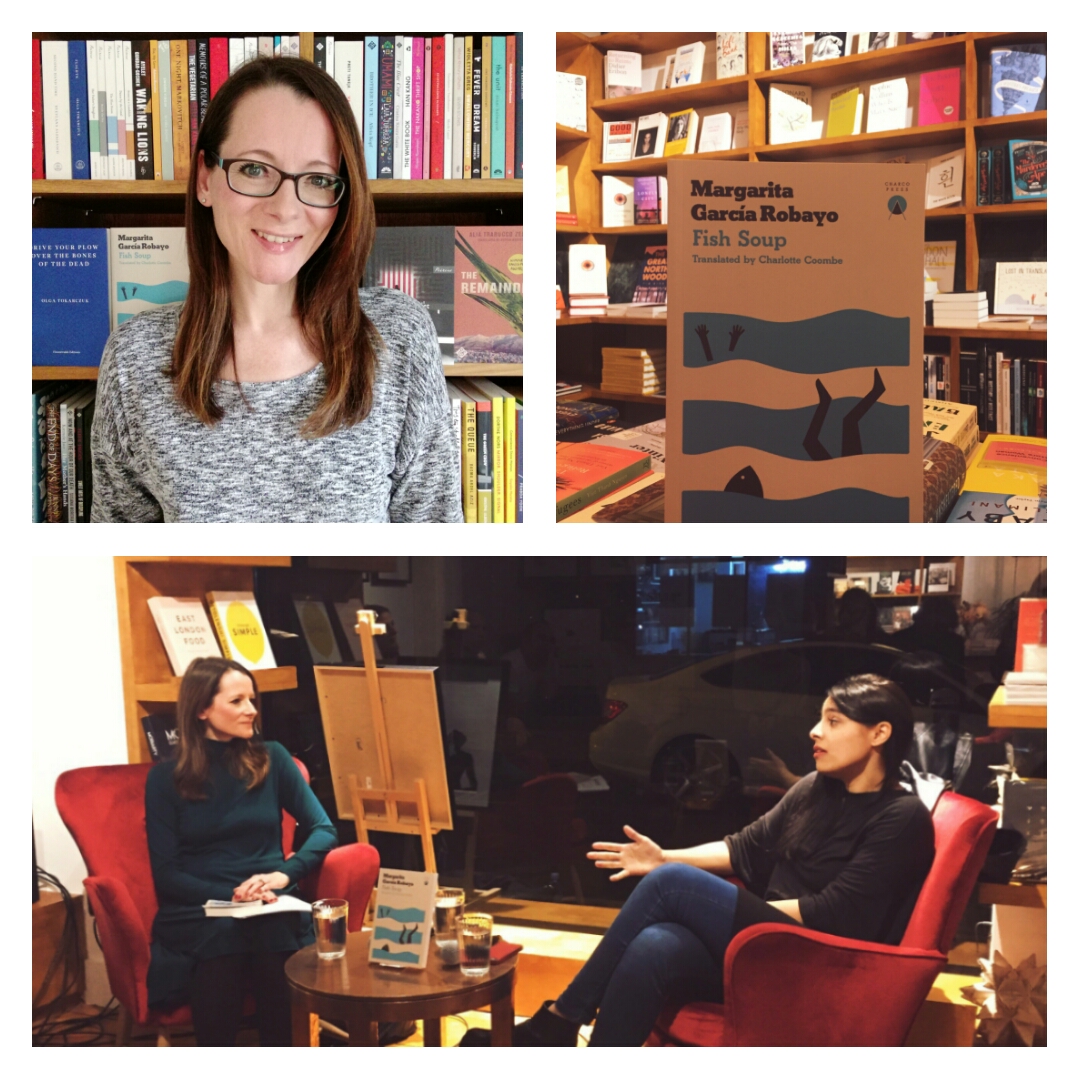 I was thrilled when Carolina Orloff, director and editor at Charco Press, invited me to host an evening in conversation with Margarita García Robayo at the Caravansérail bookshop in London on 31 October. It was part of Margarita’s European book tour to promote Fish Soup, and it was a great honour to meet her in person; re-reading Fish Soup on the train to London, I was struck once again by the profundity of its caustic reflections (as well as finding it mildly surreal to be reading one of my favourite books while en route to meet its author). After spectacularly losing track of time in the excitement of meeting Margarita and Carolina at a tea salon in Brick Lane, we trooped to Caravansérail just in time for the event. It was my first time there, and I fell entirely under its spell: it’s a small premises, with the back area packed floor to ceiling with French books on one side and works in English and translation on the other. In the front area there is an intimate interview and audience space, where we gathered for our conversation.

Interviewing Margarita was a dream. She was so open and generous in her responses, both to me and to the audience. We covered topics ranging from the autobiographical nature of her writing and the need to leave Colombia in order to write about it fully, to Charlotte Coombe’s magnificent translation and the cover art of Fish Soup (beautifully described by one of my Twitter friends, author Rónán Hession, as “like Jaws but with fuzzy felt”). The thing I most want to focus on here came about when discussing the novella ‘Sexual Education’, which was published for the first time as part of Fish Soup, and is based on Margarita’s own experience of Opus Dei sex education classes in 1990s Colombia (the “Teen Aid” course was one she was forced to attend at school). There was in her class, as in the novella, a girl who claimed to be in communication with the Blessed Virgin, and we discovered in conversation with Margarita that the teachers lapped this up, pressing the girl to find out what Mary had communicated to her, so that they could use this to further convince the female students of the merits of abstention. Margarita talked about the deep effect that such indoctrination can have (in particular, the notion that “virginity” means “preserving the hymen” which, as her narrator observes wryly, results in a generation of girls with “hymen intact […] ass in tatters”), and described life thereafter as a process of “unlearning”, a sentiment which seemed to resonate with everyone present.

So can we “unlearn” how we think about borders? I’m currently reading Go Went Gone by the wonderful Jenny Erpenbeck, translated by Susan Bernofsky and published by Portobello Books. Erpenbeck seems to me to be a truly important writer of our times: in Go Went Gone she tackles the subject of migration, and I was struck by the wisdom of this reflection: “Have people forgotten in Berlin of all places that a border isn’t just measured by an opponent’s stature but in fact creates him?” How terrifying that a book reflecting on one of the great socio-political scissions of the last century is so resonant with how I feel in my country today. Borders close us off, keep people out, and create enemies: by opening a book we open ourselves, allow others in, and create connections. Charco Press are certainly creating such connections: Margarita described their endeavours as “revolutionary”, since in Latin America literary success is often limited to each individual country, with books not crossing borders in their original language, and so translation into English is an important part of literary success and wider distribution of work. At a time when “the inhabitants of this territory […] are defending their borders with articles of law” (Erpenbeck, Go Went Gone), it seems to me that promoting and celebrating work that breaks through these borders and barriers is a revolutionary act in itself. In his essay “Reflections on Exile”, Edward Said wrote that “Borders and barriers, which enclose us within the safety of familiar territory, can also become prisons, and are often defended beyond reason or necessity.” Familiar territory is exactly what we leave behind when we read literature in translation, as we refuse to remain imprisoned in how our particular political or cultural “time” is telling us to define ourselves. Said goes on to claim that “Exiles cross borders, break barriers of thought and experience”, and perhaps here we could substitute “exiles” with “writers in translation”: their books not only cross borders but help to break them down, reminding us that we are more connected than we can sometimes realise.

If you read Spanish, you can read Margarita’s full account of her book tour here.

The morning after interviewing Margarita I went to Oxford Circus to meet Sophie Baggott, who earlier this year made a pledge to read a book by a woman writer from every country in the world by 2020. Sophie also hosts BookSHElf, a monthly podcast for Wales Arts Review, in which each month she interviews a guest about a topic related to women in translation: as the November guest, I followed in the illustrious footsteps of Theodora Danek, writers in translation programme manager at English PEN, Jennifer Croft, translator of the Man Booker International prize-winning Flights by Olga Tokarczuk, and the author-translator duo Michelle Steinbeck and Jen Calleja. It was an honour to find myself the guest on a podcast I look forward to each month, and half an hour has rarely passed so quickly: it was a joy to talk about women in translation with someone who shares my passion for it. Aside from talking about the Translating Women project, we talked about books we’ve loved (I shared my four women in translation Books of the Year for 2018 – tune in to see which I chose and why!) and issues such as the difficulties facing women in translation, the importance of the Year of Publishing Women and its legacy, and what we might look forward to in terms of women in translation (as December approaches, my excitement for the soon-to-be-released Translating Feminisms chapbooks from Tilted Axis Press grows).

Sophie and I also discussed the “labels” we use to talk about literature: I don’t want to try to define what books from a given geographical region might be “like”, and I wonder whether, if we want to transcend borders, it’s helpful to categorise books by country or literary tradition (particularly if a writer might break with this, challenge it, defy it, or simply reject the notion of a national “literary tradition”). Or, like Margarita, they might be from one country, live in another, and be published in another – and it is precisely this porosity, this mobility (dare I utter the words “this freedom of movement”?) which make literature in translation so important to the English-speaking world. What do a gathering in a multicultural bookshop and a podcast that can be listened to on the world wide web represent, if not a breaking down of borders? Sophie asked me to identify the best opportunities to have come out of the Translating Women project, and it was easy to answer: the connections. What a privilege it is to form relationships (real or virtual) with authors, translators, publishers, and fellow readers.

English PEN uses the strapline “Literature knows no frontiers”, and if there is anything that the books I’m reading have in common, it is their ability to reach out beyond national stereotypes and physical borders, and create connections. I hope that a day will come when we don’t have to talk about “women’s writing”, because we shall simply be talking about “literature” – but the days of such equality are, I think, still some way off. Until then, I shall be celebrating the inspiring, enriching, sometimes hilarious, sometimes heartbreaking, sometimes quiet, sometimes exuberant, always fascinating body of work that women in translation represents.

And on that note, I’m bringing together two things I love at the end of 2018: I always find the end of the year to be a time of reflection and resolution, and I also like to share some of my favourite quotations from the books I’m reading. So each weekday from 1 December until Christmas, I shall post on Twitter a meditative or inspiring quotation from a book by a woman writer in translation, using the hashtag #WiTWisdom. Please feel free to share and follow the hashtag, and to join in if you feel moved to do so! 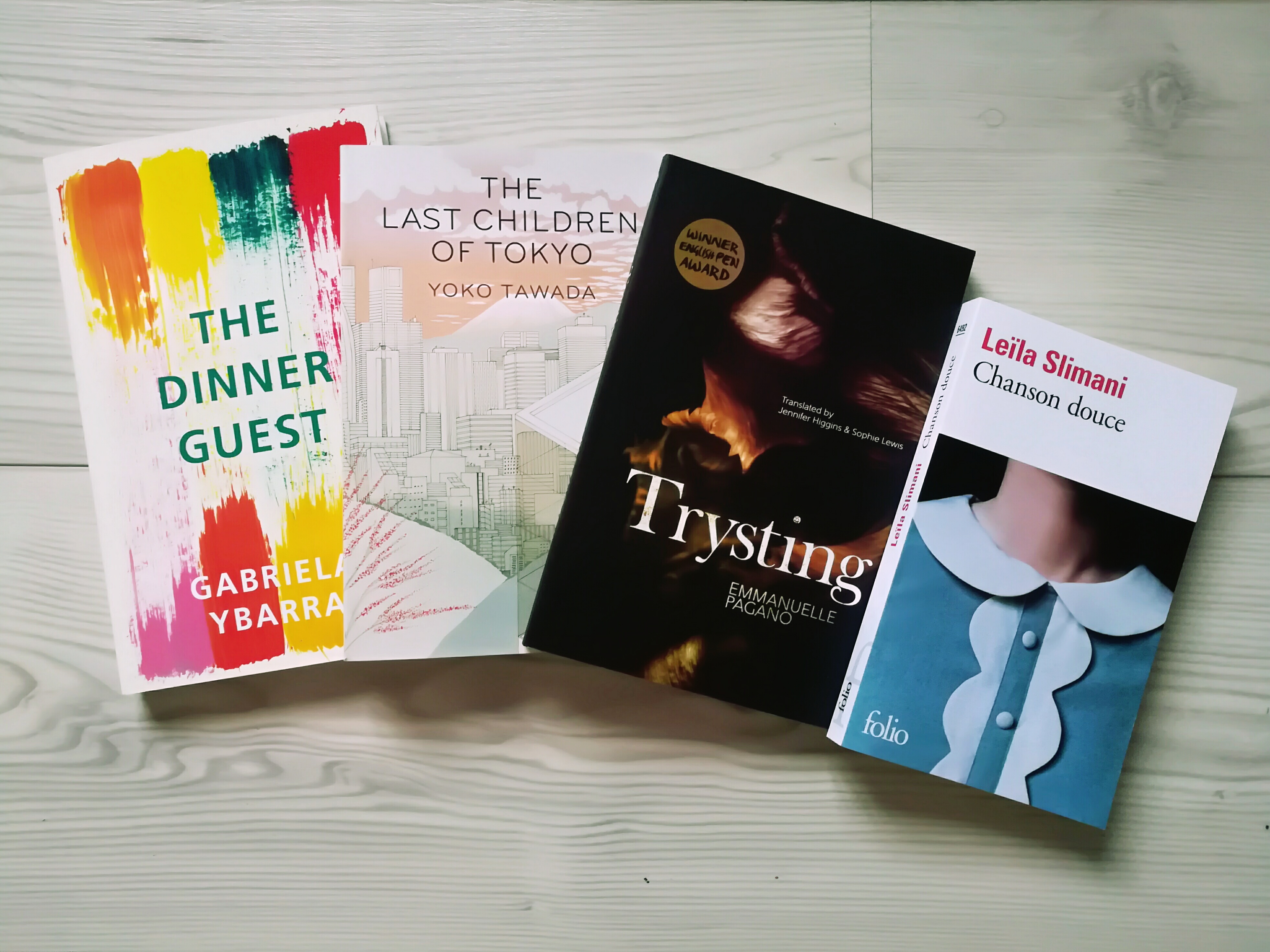 The books I couldn’t resist purchasing at Caravansérail