Translated from the French by Mark Hutchinson (Les Fugitives, 2019)

The Governesses launches the 2019 catalogue of Les Fugitives, and is the first of six exciting-looking titles they’ll be releasing this year. In this short novella, Anne Serre turns traditional fairytales on their head: we have young women trapped in a remote rambling house, a possible curse and an almost certain metamorphosis, but nothing is ever quite what you might expect. The Governesses may be told in the manner of a pseudo-classic French fairytale, but don’t be lulled by this: it is a carnal, sensuous, ravenous tale of desire and observation. 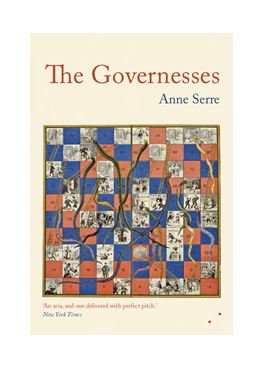 The eponymous governesses are three ethereally beautiful young women: Eléonore, Laura and Inés, and they arrive at the sprawling country home of Monsieur and Madame Austeur, ostensibly to look after the Austeur children but really to invigorate the sedate surroundings: their arrival is described as “life itself advancing.” They bring a uniquely female energy to the Austeur home, a sensuality hidden beneath their ornately buttoned dresses and paraded in the grounds of the house (but never beyond its iron gates). Though Monsieur and Madame Austeur have only four children, a flock of young boys follows the governesses everywhere, enthralled by them, occasionally entertained by them and, in the case of the older boys, encountering new feelings of lust because of them.

The narrator is, it must be said, rather coy. We are invited to view the governesses, to spy on them, to pity them, and to pursue them as they escape from view; the narrator toys with us, telling us that “it’s obvious there’s a secret in their past”, but never revealing what this might be. Drawn into this world where nothing is quite what it seems, the governesses seem demure and vapid at first glance, but don’t be fooled: they are voracious sexual predators, hunting and devouring their prey. There are several references to their teeth, which are “gleaming” and “wet”, dripping at the thought of sinking into flesh. They hunt ruthlessly, capturing their prey in a net that may be either real or metaphorical, trussing him up, bleeding him dry, and using him for their own pleasure alone. So far, so subversive:

“They loved watching a stranger arrive. There were times, in fact, when they liked that more than anything, for as long as he advanced, ignorant yet dimly aware of a summons that was never clearly formulated as such, they were all-powerful. Once he had been bound hand and foot and consumed, on the other hand, they turned back into three poor little governesses.”

The governesses are siren-like in their allure, pitiless towards their prey but, crucially, once the prey has been devoured, they turn back into the form we first meet them in, “three poor little governesses.” Some kind of metamorphosis is at play, and will come full circle at the end of the narrative; for now, the governesses leap naked through the grounds in search of men to conquer, tearing their skin on branches and grasses. They are often described as a single being, and they take on – or partially take on – various forms: they bound across the road like young deer, their skirts rise around them like wings, and at other points they are described as alien, a coven of witches, and the Three Graces. They are vampiric, and they are also creatures of the moon, but at other times they are three flesh-and-blood women who reject their archetypal role: “They had heard about love, they had heard about men and the power they wielded. It filled them with dread.”

“Oh, if only they could leave! Run off with this man who has happened along, using him to pass through the gates and loving him because he can take them to a place where their bonds will be ever so gently loosed at last. So that, one day, each of them will be able to live and speak in her own name, be alone in the world and free of the others at last.”

So not only are they trapped, but they are trapped together, in a spell reminiscent of punishment (is it too much to suggest even reminiscent of Sartre and his famous “Hell is other people”?) Redemption would not be through love, but through living freely without being dependent on anyone else. Yet the governesses are not powerful enough to escape the curse or spell that binds them to the house and to one another, and condemns them to be dependent on the gaze of others: the elderly gentleman across the way spies on them with his telescope, and his voyeurism makes them feel cherished, “no longer alone in the world”. They revel in his gaze, sometimes performing seductive dances for him and flashing their skin at him when the fancy takes them, and other times sticking out their tongues at him and reminding him that they decide how much he gets to see and when. Still they are not free of their own narrative: their greatest curse is not that they are trapped, but that if they are not observed, they cease to exist (remember this as you close the book at the end).

The translation by Mark Hutchinson seems to capture the spirit of the governesses, these spellbound, spellbinding beings who defy all expectations: Cécile Menon, publishing director at Les Fugitives, told me that Hutchinson and Serre worked closely together, and it shows. There were only a few details (mainly syntactical) that I stumbled over; overall this was a seamless, sumptuous read. Serre’s book, like the eponymous governesses, may seem prim and archetypal at first glance, but is surprising and bewitching beneath the exterior. It is a hymn to voluptuous pleasure, a retelling of classic tales that foregrounds female sexual desire, an enchantment of the senses. If you like dark, decadent narratives, then it’s well worth losing yourself in The Governesses for an hour or two.

The Governesses will be released in the UK on 2nd April; you can pre-order your copy here. Available in the US from New Directions.