Last week saw the announcement of the Man Booker Prize longlist, and with it a remarkable and welcome surge of women in translation: more than half of the thirteen books selected this year are by women writers. The two books I was particularly delighted to see on the longlist were Olga Tokarczuk’s Drive Your Plow Over the Bones of the Dead, a funny, subversive and insightful pseudo-noir murder mystery translated by Antonia Lloyd Jones for Fitzcarraldo Editions (full review here), and Alia Trabucco Zerán’s The Remainder, a glorious tumult of historical memory, friendship, guilt, families and death, with raining ash and a lot of pisco, translated by Sophie Hughes for And Other Stories (short review here, a more in-depth one to follow). Drive Your Plow and The Remainder are very different narratives, with distinct preoccupations: an elderly woman struggles to be taken seriously in rural Poland in Drive Your Plow, and three young Chileans weighed down by a past they can never experience go on the road trip of a lifetime in The Remainder. But these two books also have plenty in common: they are both brave, distinctive, brilliantly translated, and a window onto the culture they represent. 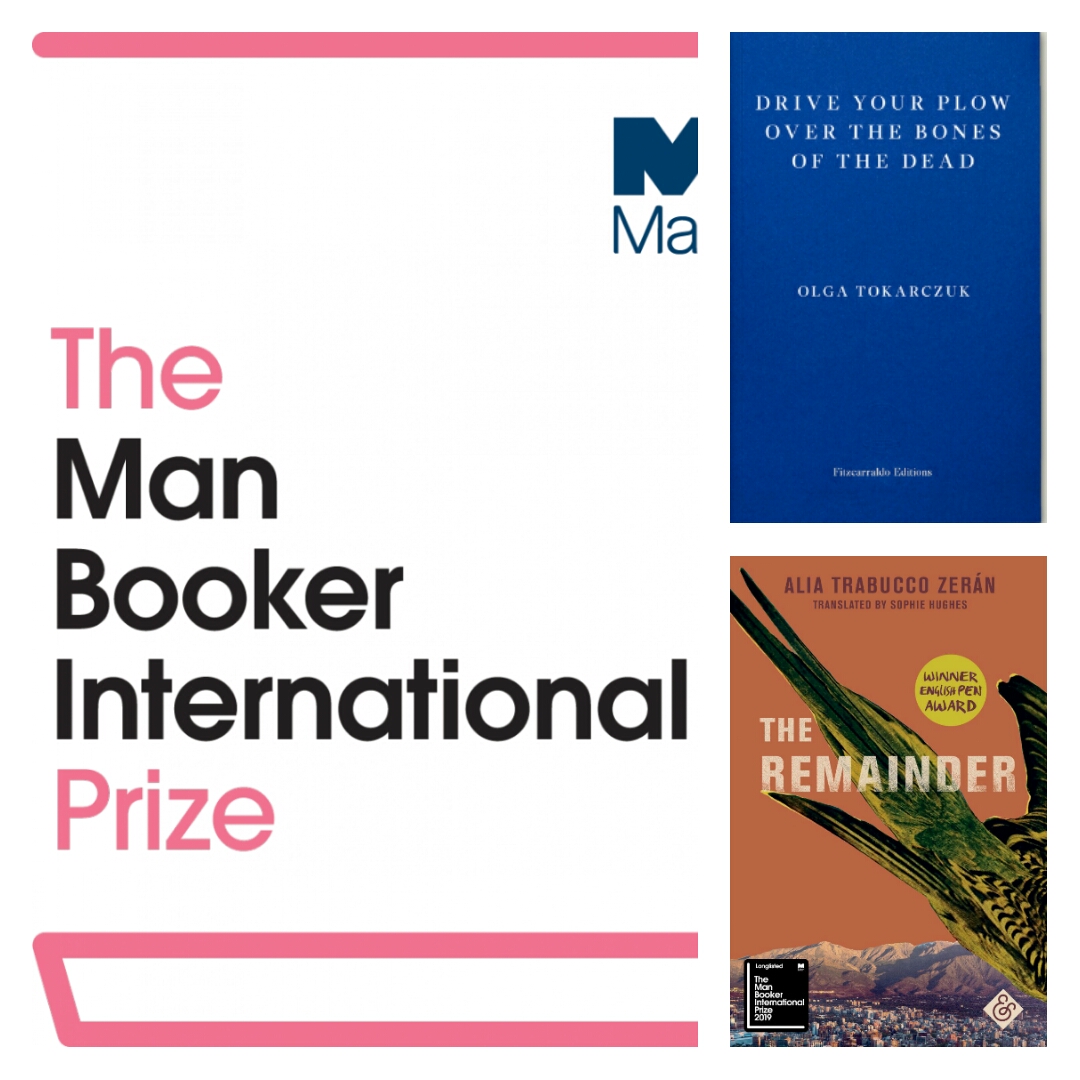 As you can imagine, I find it immensely heartening to see a clear move away from the some of the biases that have traditionally prevailed in literary prizes: in an article for In Other Words, Daniel Hahn wrote of the 2017 Man Booker International prize that the longlist reflected “a significant gender imbalance (as we see every year), and a significant bias towards European writers and European languages (as we see every year, too).” Hahn goes on to note that these imbalances were indicative of the overall submissions pool, and so this leads me to wonder whether the tipping away from gender bias and eurocentrism on the 2019 longlist might also reflect moves in this direction more generally. Nine languages and twelve countries are represented in the thirteen books, and here’s where they’re coming from:

Europe is not quite as dominant as in previous years, which suggests the beginnings of a shift towards greater diversity and globalisation. As for languages, Spanish is best represented with three of the thirteen books:

All of the books translated from Spanish are from Latin America rather than peninsular Spain, which also partly accounts for the more diverse geographical spread. Arabic and French tie for second place, and of the remaining six, two are Asian and four European.

It’s not only women writers who make up the majority of this list: independent publishers are the big winners, with eleven of the thirteen entries. The year when gendered and eurocentric biases are less evident is the same year that independent publishers dominate the longlist, suggesting a direct correlation between the activism of smaller presses and increased parity in the translated literature market. As MBI judge Maureen Freely noted in an article in The Guardian, “the really good independents have become the cultural talent scouts”, and The Remainder and Drive Your Plow are stellar examples of this: The Remainder is a debut novel published by And Other Stories as part of their commitment to the Year of Publishing Women, and Tokarczuk was discovered by Jacques Testard of Fitzcarraldo Editions because of his determination to seek out a Polish author as a response to the backlash against the Polish community in the wake of the Brexit referendum.

Though there is much to celebrate, I can’t offer a reaction without mentioning the books I wish had been on the longlist. I am fully aware that I have not read all thirteen longlisted books, and that my opinions are necessarily inflected with my own subjectivities, but for what it’s worth, I am baffled that these two did not feature on the longlist:

Disoriental (Négar Djavadi, translated by Tina Kover for Europa Editions): this is not just one of the best books I’ve read for this project, it’s one of the best books I’ve ever read. A sweeping family saga set in twentieth-century Iran, Disoriental is also a personal story of exile and (dis)integration in Europe. It’s ambitious, witty, wrenching, and the translation by Tina Kover is exquisite.

Resistance (Julián Fuks, translated by Daniel Hahn for Charco Press): another story of exile and an intensely poetic imbrication of the personal and the historical. Resistance is a haunting account of Fuks’s troubled relationship with his adopted brother, and the consequences of displacement. The writing is taut, subtle, and lyrical, and Hahn’s translation is flawless.

I fervently hope that both Drive Your Plow and The Remainder will make it onto the shortlist. Last year’s winner and a debut author, two fantastic books and two impeccable translations. I’ll leave you with a favourite quotation from each:

“Can it really be true? Is this nightmare really happening? This mass killing, cruel, impassive, automatic, without any pangs of conscience, without the slightest pause for thought, though plenty of thought is applied to ingenious philosophies and theologies. What sort of a world is this, where killing and pain are the norm? What on earth is wrong with us?”
Drive Your Plow Over the Bones of the Dead

Michael at Translated Lit does a roundup of the longlist

Jess and Will at Books and Bao choose their favourites, with links to reviews of several of the longlisted books

My full reviews of two other longlisted books: