Edited and with an introduction by Raph Cormack (Comma Press, 2019)

This is the first of Comma Press’s “Reading the City” books I’ve read, and I was drawn to The Book of Cairo for primarily personal reasons: Egypt is my dad’s homeland, and its history the reason for my family’s enforced dispersal across the globe. I wanted to learn more about a country that for me carries much displaced nostalgia, and Raph Cormack’s thoughtful introduction gives a moving insight into the history and modernity of Cairo: “The city has entered into a state of enforced forgetfulness”, he writes of the Arab Spring – a different historical conflict from the one that my family endured, but the same deliberate state-sponsored amnesia. Cormack writes of a “desire to escape” prevalent among young Egyptians, and describes Cairo as “a city that has always felt on the verge of disintegration”, “beset with difficulties and haunted by many ghosts”. The Book of Cairo presents ten short stories (four of which are by women writers), and brings to life this troubled, complex city. 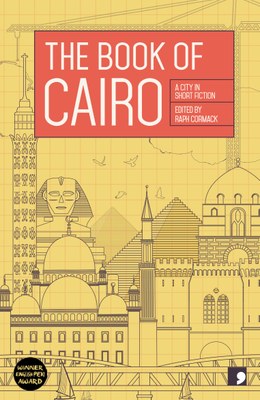 Together these stories present a mosaic of a shifting city, fraught with problems ranging from poverty and inequality to drugs and military interventions. But they also have an individual and very human dimension, from the street-sweeper fearful of not being able to afford his daughter’s wedding (‘Gridlock’) and the alienation of experiencing everything outside of a collective narrative (‘Into the Emptiness’) to the misery of unrequited love (‘The Other Balcony’) and the single-minded quest for truth that blinds the seeker to all else (‘Hamada al-Ginn’). Cairo’s streets and buildings come to life, as does its fresco of diverse inhabitants and its westernisation (messages are sent via WhatsApp, Pampers and Persil are part of a family’s regular shopping experience, and high-rise buildings spring up to “brush the sand away into the backdrop”). The stories range in tone from comical to satirical, surreal to sinister: in ‘Whine’, an office manager becomes convinced that evil spirits are manipulating his fate, while ‘Hamada al-Ginn’ questions notions of “truth”: “They both stuck to their stories, despite the continuous physical interrogation that they were subjected to for three days, ordered by Major Haitham Hamdy himself (some people give this ‘physical interrogation’ the name ‘torture’).” In ‘Siniora’, a man is so obsessed with observing his girlfriend’s genitals that he doesn’t notice that while she is sitting naked before him she has been setting up an illegal home-grown drugs empire and has moved on from him entirely; in ‘Two Sisters’, a woman’s attraction to a masked man in a video store has vampiric consequences, while the narrator of ‘Into the Emptiness’, “dissolve[s] in this world and disappear[s].”

My two favourite stories in the collection were (perhaps coincidentally) both about storytellers: ‘Talk’ is about a professional rumour-monger, and ‘The Soul at Rest’ about an obituary writer. In ‘Talk’, a doctor is surprised to find his life close to ruins because of a rumour that he thinks has no basis in truth: his investigations lead him to the office of a man who gleefully admits that he started the rumour as part of his own ministry of vigilante justice. A failed writer himself, the rumour-monger explains that “I used to write stories that no one ever read. But I was only successful at rumours. I’ll remain an uncredited author, but at least I’ll be a well-off one. And who knows, maybe one day I’ll achieve some immortality”, and this chilling attitude highlights the dangers of slanderous stories in a fame-seeking fake-news age in which “innocence and guilt are one and the same, since both the innocent and the guilty issue the same denials.”

In ‘The Soul at Rest’, an obituary writer makes an ill-advised judgement about a woman whose lover wants her to have the most lavish obituary he can buy. The obituary writer then attempts to make amends for his thoughtlessness, acknowledging that he needs to feel better about his own mistake: “What I want to say won’t take more than a page, maybe two. But one thing is for sure, regardless of the number of pages, it won’t make a difference to anyone but me. I just want to vent so I can feel better about what I’m going through”. The obituary writer lavishes his time and money attempting to atone for the wounds caused by his thoughtless prejudice, because “the pain kept growing inside me until it had become a permanent resident”, and tries all he can to escape from his own guilt:

“I cried a lot, I asked God for forgiveness; I even went as far as asking for a transfer to another department.
I just wished that I could meet the man again, to ask for his forgiveness.”

This proves impossible for reasons I’ll let you discover for yourself, but his ultimate admission that “my pain has still not subsided” is a timely reminder about the importance of resisting judgement based on class and creed.

The Book of Cairo is a superb collection of intimate modern stories that shatter the mysticism of the Orient and show us what Cairene life is and can be. I love the work Comma Press seeks out, and shall be reading more from their Reading the City series. I also highly recommend Banthology, stories of protest commissioned from the seven “unwanted nations” on Trump’s original “travel ban” (five of which are by women writers) – literature can and should be political, should challenge and subvert, should resist complacency and the “culture of sameness” – and Comma Press are leading the way.

Review copy of The Book of Cairo provided by Comma Press.