A Girl Returned is an intense and affecting account of how a life can change forever in a single day. The unnamed teenage narrator leads a happy and harmonious existence with her affluent parents in a nice neighbourhood of an Italian city. Or, rather, this was her life: it is recounted in flashback, as we meet the narrator when she arrives at a rundown house in the country. This is her new home – though, as we learn, it was in fact her first home. Her parents were living in poverty when she was a baby; they had three older children already, and then found out that the mother was pregnant again. Meanwhile, the refined Adalgisa, wife of the father’s cousin, was miserably childless and wanted a little girl of her own… you can fill in the gaps. Indeed, this narrative is pieced together in half-conversations and the silences between them: the narrator finds herself suddenly transplanted back into the heart of the family who gave her away, unwanted on both sides, and with no idea why her existence has been uprooted so suddenly. She is hampered in her desire to understand by the adults who decide for her that she is too young to know the truth: she is left wondering why her mother gave her up and when she might come to take her back, constructing her own less painful version of reality in the absence of a truth that will be revealed in two key scenes towards the end of the novel. 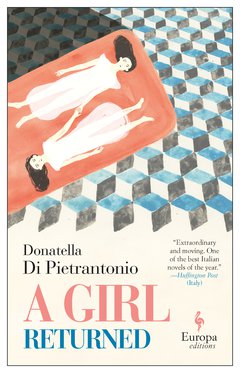 Meeting the “girl returned” at this pivotal point plunges us straight into the most turbulent moment of our young narrator’s life: “I was thirteen, yet I didn’t know my other mother”, she tells us by way of introduction to her story. Gone is the happy bourgeois life of music lessons, elegant meals, a nice apartment and a full social life – now the girl is sharing a bedroom with three siblings she never knew she had, awakening to the rhythmic sound of her older brothers masturbating and sharing a bed with a younger sister who has yet to master night-time bladder control. Attitudes from the new family range from indifference to overt hostility, and in the village and at school there are frequent displays of resentment towards l’arminuta, the girl returned. She finds an unlikely ally in her older brother Vincenzo, a tearaway who frequently runs away with the gypsies, and he awakens in her the first flames of adolescent desire. Yet he too is wrenched away from her in one of the most painful episodes of the story, and she is left with only her younger sister Adriana for companionship. Adriana is wild and impulsive, but capable of great compassion, and gives depth to a family unit that could otherwise potentially fall into clichés of “rich girl meets poor family who despise her for having opportunities they never had.” Indeed, in a book where the narrator feels so little love and warmth, one of the most remarkable feats is that it spills over with warmth and heart. Donatella di Pietrantonio gives depth and substance to an eclectic cast of characters, many of whom (including l’arminuta herself) remain unnamed. The “other mother” speaks infrequently, and when she does it is in a rural working-class dialect that l’arminuta barely understands. She is “the mother”, “the woman who conceived me” or “the other mother” – always distanced from and by the narrator, who explains that “from the moment I was given back to her, the word “mamma” had stuck in my throat like a frog that wouldn’t jump out.”

One of the reviews on the book cover describes the author’s “feverish prose”, so I was expecting this to be a defining feature of the narrative, but this wasn’t my impression of A Girl Returned. I found it much more considered and languorous, though of course this may be a difference between the original and the translation. Ann Goldstein is, as the blurb notes, Elena Ferrante’s translator: this is marketed as a selling point, and for long stretches, in fact for the majority of the book, the translation is pitched beautifully. I liked the less frenzied pace and delivery, and Goldstein strikes an excellent balance between the intensity of the narrator’s feelings (“she reopened my memory with a lash of the whip”) and the understatement with which certain scenes are narrated (“I was an orphan with two living mothers. One had given me up with her milk still on my tongue, the other had given me back at the age of thirteen.” The occasional flash-forwards that show us the resolution of particular characters’ stories are also offered with a detached melancholy that is all the more moving for remaining unembellished. However, I was frustrated at times with calques from Italian that disrupted the syntax for me or stood out as unusual (second-verb infinitives rather than gerunds, use of nouns where English would use a noun phrase, and some literal translations of vocabulary that do not have the same general field of usage in English). It’s possible that I’m more attuned to such nuances in translations from romance languages, which are my language area, but if the translator is mentioned as one of the reasons why the book is so excellent, then it does invite certain expectations. I imagine that Goldstein has to produce translations under time pressure as she’s so prolific, and if my appreciation seems mitigated, then let me be clear: I loved A Girl Returned. I even loved most of the translation. I hope that other readers will just skim over the words and phrases that made me pause, and I certainly hope that this book will find its way into your hands: it’s a gripping story, a fascinating telling, and will linger in my mind a long while.

Review copy of A Girl Returned provided by Europa Editions