Night as it Falls is the debut novel by French-born Bosnian-Montenegrin writer Jakuta Alikavazovic, and follows its main characters Paul and Amelia through a passionate relationship, an abandonment, a reunion, and a final separation. Amelia is the “official” mystery of the novel – a woman so remarkable as to be almost mythical, but whose personal struggles and destructive tendencies render her incapable of fully experiencing contentment. Amelia is an almost unremittingly selfish character; I didn’t warm to the description of her given in the blurb (“one of those people who destroy everything and call it art”), instead preferring later descriptions of Amelia (“the woman who had grown up too fast”; “caught in the walls like a bullet shot many decades ago, a bullet which still pressed on, imperceptibly”). 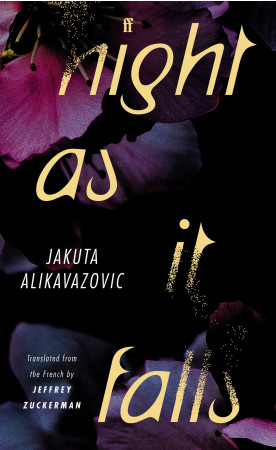 If Amelia is a mystery, there are also plenty of silences with respect to Paul’s past: we learn that his father had given him this name so that it would sound completely French, a camouflage to go unnoticed, and that Paul knows little about where he comes from other than that it is “a place that he both was and wasn’t surprised to hear regularly invoked as an example of an urban disaster.” There is also an incident later on, when Paul overhears a conversation between his daughter and his father that at first he thinks is baby talk, and then realises is his father’s first language, a language he never passed on to Paul, a language he deems safe for his granddaughter, a generation later.

The blanks in Amelia’s past are, however, more explicit: her mother was more committed to her resistance poetry than to parenthood, leaving as legacy a box of documents that is Pandora-like in its housing of “every horror, every injustice”, and which Amelia refuses to open. The blanks are also the impetus for Amelia’s flight to Sarajevo, as she goes in search of a history that belongs to her and from which she is distanced; yet we do not learn much about this time or her discoveries. Much in Night as it Falls is about what’s not said, and this left me feeling shamefully ignorant: overall, the novel is not as instructive about Bosnia’s recent history as I was expecting, but perhaps that’s my failing for unconsciously expecting that. Just because a woman goes chasing her ghosts in Sarajevo, it doesn’t mean that the book should be about the war those ghosts inhabit. I did, however, really appreciate occasional insights such as this one: “A city shelled for nearly four years, snipers on the roofs, blood in the streets, and, ten years later, cemeteries everywhere, in the stadiums, in the parks; cemeteries and oddly healed wounds; children who would become adults unable to sleep with windows open, or with windows shut.”

Much is left unsaid between the characters too: silence generates some fundamental misunderstandings that are painfully believable. This is also true of the characterisation more generally, which is extremely consistent: all of the characters behave believably, however disappointing that might be to the others. Landscapes throb with a pain that mirrors the internal struggles of the characters, and if Paul and Amelia are closely tied to the cities they inhabit, then it is appropriate that another fascinating character, Albers, makes her living (and her notoriety) studying the notion of the city. Indeed, the supporting characters are easily as fascinating as the protagonists: the other character I really warmed to was Louise, the daughter of Paul and Amelia, whose transition into adulthood is intimately connected with Albers’ fate.

Amelia’s end is announced in the early pages of the book (indeed, the opening line is “Paul was in bed with Sylvia when he found out what happened to Amelia Dehr”), with the means revealed in the early chapters and so it’s no spoiler to mention it here: she jumps out of a window. Despite knowing this from the outset, the development of how she came to that point is full of tension, and is mirrored by a mid-novel announcement of Albers’ fate, the details of which shift into sharper focus later on. I enjoyed this storytelling technique, but the thing I found most interesting while reading Night as it Falls was the slippage between the novel itself and my own expectations. In the end, it wasn’t quite what I’d anticipated: it was very western European in its focus and form, whereas I had assumed it would be more about Bosnia; despite living through historical atrocity, the characters are mostly introspective, whereas I had expected them to be more outward-facing. But why shouldn’t Alikavazovic write about a privileged woman having an internal crisis? It was my own expectation that this novel would be about historical tragedy, and if I experienced some disappointment in the divergence between my expectations and the reality, this is not a criticism of the book itself. The wars in the former Yugoslavia remain a blurred backdrop to the narrative, yet someone who is better informed about them than I am might find more of a connection between the circumstances and the characters. Night as it Falls is a formally exquisite book, each word carefully balanced and with many echoes throughout the narrative, and Jeffrey Zuckerman’s sensitivity to this in the translation makes it worth reading for its formal properties alone. It is also well worth reading for the psychological portrait of its characters, the relationships between them, and the ability to maintain tension when the dénouement has been announced at the start. This is a book to be read for what it can offer in terms of human portraits rather than geographical or historical insights, but no less impressive for that.

Review copy of Night as it falls provided by Faber & Faber