Mieko Kawakami’s Breasts and Eggs (also translated by Sam Bett and David Boyd and released in the UK by Picador Books) was one of my favourite releases of 2020; prior to that I had loved the offbeat humour of her novella Ms Ice Sandwich (translated by Louise Heal Kawai, Pushkin Press 2017), and so a new Kawakami was guaranteed to be an exciting event for me. 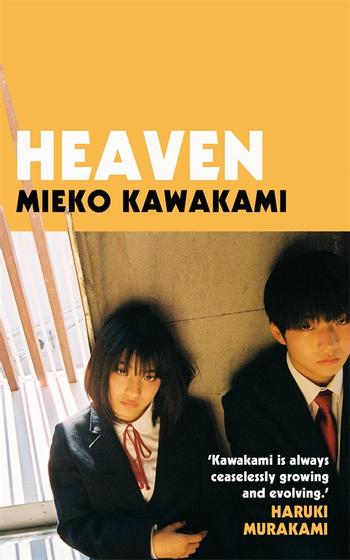 Heaven was one of my most anticipated books this year, and it does not disappoint. It is a spare yet complex portrayal of teenage bullying, told from the perspective of a an unnamed male narrator with a lazy eye who is subjected to horrific physical and psychological torment from a group of boys in his class. He begins to receive anonymous notes slipped inside his pencil case or taped to the lid of his desk, the first one simply reading “we should be friends” (as a particularly nice touch, Picador sent out with the review copies pencils with this motto engraved on them). Curious and a little nervous, eventually the narrator agrees to meet up with the author of the notes, and from this strikes up a friendship with Kojima, a girl who is also bullied at school, and in whom he finds a kindred spirit, a friend in need, and someone who finally understands both what he suffers and why he does not fight back.

In addition to the wonderfully written relationship that develops between the narrator and Kojima, there are plenty of other aspects to the characters’ lives (an impressive amount, actually, given how slim this novel is). The narrator lives with his (absent) father and his stepmother, who is more of a parent to him than his father seems capable of or interested in being; Kojima also has an interesting and non-standard family story, and with both teenagers there is a subtle analysis of how we become who we are, and how events, circumstances and afflictions shape us.

Kawakami does not shy away from the cruelty that human beings are capable of inflicting on one another, and nor does she offer any crass kind of redemption in which the bullies realise the error of their ways. If anything, the only kind of resolution that we get about Ninomiya and his gang is that they are cruel for the sake of being cruel, and that no amount of attempts to make them realise the consequences of their actions is going to make them suddenly develop the empathy they lack. Apart from two notable scenes, we don’t see the bullies outside the school environment – they don’t need to be multifaceted characters with problematic lives of their own, because we see this story through the eyes of the bullied child, and to him they are simply the perpetrators of his daily misery. He has one attempt at a reckoning with one of the ringleaders when he bumps into him in a different location, but his efforts to make the bully aware of the effects of his actions are met with indifference. And the second time that the bullies enter the fray outside of the school setting is the almost-final scene, the apex of their crusade of humiliation, in which the narrator will be stripped of everything he cared about.

The teachers all seem entirely unaware of (and unwilling to notice) the drama that is played out in the schoolroom each day: this is a daily nightmare from which the narrator has no escape. His desperate private wishes that Ninomiya might not notice him, or might forget him, are heartbreaking (“I was crying because we had nowhere else to go, no choice but to go on living in this world”): this boy wants to be invisible, to blend into the background, and yet both his physical defect and the way in which he has been singled out as a target make this impossible.

There are scenes in Heaven that made me wince, and feel a terror at the simple fact that such deliberate humiliation can and does happen: the callous brutality of the teenage bullies is something that Kawakami excels at portraying. Even more impressive, though, is the way in which she communicates the reactions of the bullied child. It must be incredibly hard to write from the perspective of an adolescent without conferring on the character the wisdom and experience the adult author has gained, and Kawakami manages this superbly. There is something very real about the depth and intensity of their thinking process and their attempts to articulate what is happening to them, and the co-translation by Sam Bett and David Boyd is believably adolescent but never in the cringe-worthy manner of how an adult thinks a teenage boy would speak.

Perhaps one of the most striking things about Heaven is how different it is from Breasts and Eggs, and how versatile Kawakami is as a writer. There are recognisable traits, such as the focus on characters who don’t fit into standard expectations of “normality”, and the ability to convey so much detail in relatively few words, but the situation and plot are entirely new (which, however much I might love what an author has done before, is always a good thing in my view). Similarly, Bett and Boyd translate in a way that communicates the stylistic similarities or idiosyncrasies, but without producing a “flat-pack” translation, showing their understanding of and attention to what makes this book both recognisable and unique (including the particularly beautiful short sentences the narrator uses to try to understand his reaction to his growing intimacy with Kojima: “She liked my eyes. The memory stood on my chest. It was good and bad at the same time”). There is also a superb translation of wordplay involving the phrase “someday best” (a term I want to adopt and use regularly); in fact, the only negative point about reading Heaven was the way the Bryan Adams power ballad with the same title would not leave my head every time I picked up the book.

In fairness, though, the earworm isn’t Kawakami’s fault. And it would be a bit mean of me to blame Bett and Boyd, especially since the title is important in more than one way.

The ending of Heaven is not at all what I was expecting (also a good thing in my opinion – I don’t like predictable narratives): it made me see certain key sections and dialogues in a new light, and left me thinking about both the narrator and Kojima well after I closed the cover. This is a truly wonderful book: discomfiting, unsettling, and entirely unique.