Buckle up and brace yourself, because The Antarctica of Love is an excellent book, but a devastating one. It is narrated by Inni, a woman who has been savagely murdered, and she is navigating the afterlife armed with a bagful of regrets, grudges and dark devotions that she shares with us as her story unfolds. 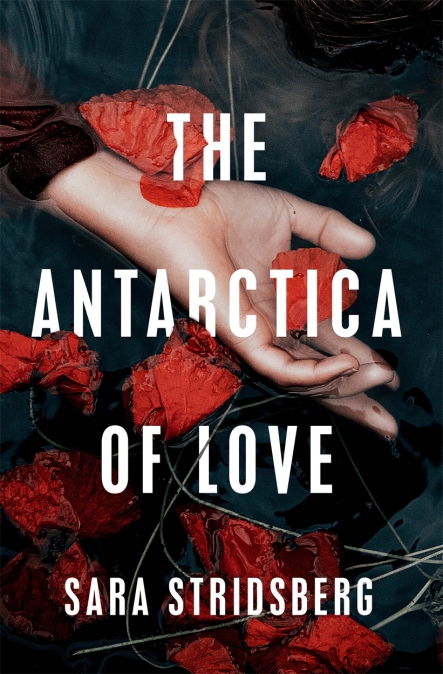 In life, Inni was a drug addict and sex worker, and this is the one detail that I questioned at first: was Stridsberg potentially opening herself to criticism that there is a certain “kind” of woman who might be more likely to suffer this fate, and from there was it possible to interpret the choice of Inni’s identity as a kind of shaming of a particular demographic? However, these fears were allayed as the narrative developed: my feeling is that Stridsberg is in fact highlighting how precarious and vulnerable a drug-using sex worker is, how easy it is to fall outside a social system and find all the routes back in blocked, and how no-one consciously chooses to follow that path. Inni’s past, and the events and experiences that led her to her fatal meeting, are exposed sensitively and without judgement – in fact, in a way that invites compassion rather than condemnation.

The opening scene of The Antarctica of Love has a wistful serenity beneath which simmers the imminent violence: “We were in the forest at this point. In a kind of twilight, but with no sun, a brownish rainy gloom settling over the scene. Could I have rung someone? No, I couldn’t, because even if there had been someone to ring, time would have run out.” Inni goes on to describe the details of the forest that surrounds her, from the swaying treetops to the insects crawling on the underside of flowers – a view she has because she is pinned to the forest floor. The unfolding of the scene is artful in its slow development, with an inexorable progression from the things Inni observes to the horror she is about to experience: “And now it was cold, and urine and blood and faeces ran down my legs. I was thinking that the trees must be suspended between man and God, stretching their crowns up to the heavens, their roots like dragons’ talons clawing into the earth where the dead reside and where soon I would be.”

After Inni’s death, her murderer cuts her body into seven pieces, placing some parts in suitcases that he leaves in the forest, and tossing her head into a slurry pit where it will dissolve and never be found. After this, Inni switches between the recent event of her murder and memories from her past that explain how she arrived at that place on that day with that man. She recognises the pivotal points in her life that changed its course (her infant brother’s death in a river, her first experience of drugs, her subsequent prostitution to fund her addiction, her doomed attempt at a healthy relationship with the father of her children, then having her first child taken away by Social Services and giving up the second at birth). She needed a cure, not for any of her addictions but “for what I was.” Yet there is no self-pity from Inni in her life after death: she notes that her children are better off without her not as an appeal to us to think or reassure her otherwise but as a matter-of-fact comment that to her is a certainty. Though she wishes her severed head were resting with her mutilated body, this is about as much regret as she shows regarding her death, and the language is brutally beautiful in its poetic simplicity. Deborah Bragan-Turner’s translation conveys this superbly, as well as making some particularly excellent lexical choices (“the well-heeled live in the centre, as they always have”; “the grubby little white bag in which I kept everything I possessed”; “then came the numbness, purling through my veins”). The occasional direct address to the reader is engaging, but also offers insight into Inni’s marginal existence (“Are you still listening? It doesn’t matter if you aren’t, I long since gave up caring whether anyone heard what I said”), and the way in which she accompanies (and helplessly observes) her children through her restless afterlife is particularly heart-rending.

I read The Antarctica of Love in the same week that the horrific details of Sarah Everard’s murder were released in the media, and so I responded to it very emotionally because of the similarities between the fictional story I was reading and the real story that I watched unfold with horror. Stridsberg writes at the end of The Antarctica of Love that it is a fictional story based only on the reality of human violence, and this “disclaimer” felt especially close to the bone. The inspiration for the story necessarily means that we can read a certain amount of social comment into the narrative of The Antarctica of Love, but this is no bad thing. Stridsberg does not lecture or preach, but instead exposes the reality of everyday violence and the consequences it has not just for its direct victims but for others whose lives are changed irrevocably because of the loss (as Inni remarks, “This is eternity without me”). Linguistically and structurally beautiful, The Antarctica of Love is a an exploration of our place in the world, how fleetingly we occupy it (“How brief life was”, Inni reflects at the start of the novel), and how much of a trace we leave: “One day nothing about my story will matter anymore, not even to me. One day all of us will be part of the thin black layer of earth that covers this planet, amongst all those who died in bygone times.” Inni’s life and death offer a haunting reflection on the way people fall through the cracks of society, a painful exposition of the many things that love can mean, and an indictment of the often deadly violence endured by women and so rarely brought to justice.

Review copy of The Antarctica of Love provided by MacLehose Press