Translated from the Polish by Antonia Lloyd-Jones, Fitzcarraldo Editions, 2018

Man Booker International prizewinner Olga Tokarczuk returns with this crime-mystery-noir novel set in rural Poland. Translated by the immensely skilled Antonia Lloyd-Jones, recipient of the 2018 award for promoting Polish literature abroad, it was a pretty safe bet that Drive Your Plow Over the Bones of the Dead was going to be amazing. Indeed, the translation is virtually flawless, and the book itself a page-turning extravaganza of understated tragi-comedy. The narrative is much more linear than that of Tokarczuk’s prize-winning Flights, and instead of the “fragments” and vignettes that peopled Flights, this is a more traditional story-telling. However, there is nothing predictable or formulaic about it for that, and it is not even “just” a story. There are philosophical reflections on life and death, acute observations of ageing and invisibility, and poignant reminders about the luxury of being able to cross borders, all of which are brought together seamlessly in a tale of vengeance, murder, and retribution in which “everything is connected with everything else, and we are all caught in a net of correspondences of every kind.” 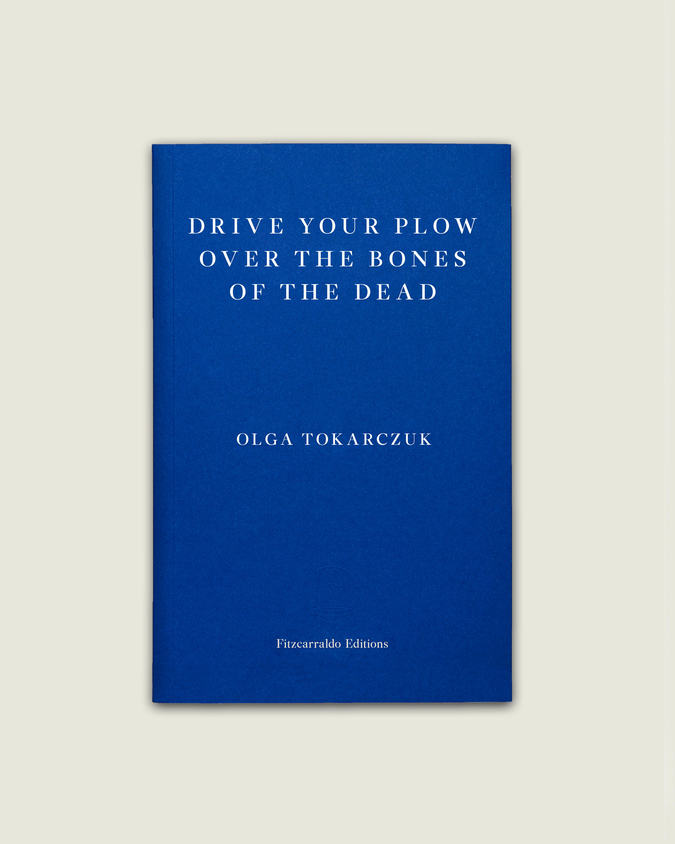 If you felt so inclined, you could easily read Drive Your Plow simply as a murder mystery; there is no didactic obligation to read it differently. But through her narrator, Mrs Duszejko, Tokarczuk also offers up some profound insights into the human condition (“The psyche is our defence system – it makes sure we’ll never understand what’s going on around us”), the lack of equality for women (“nobody takes any notice of old women who wander around with their shopping bags”), the elderly, (“once we have reached a certain age, it’s hard to be reconciled to the fact that people are always going to be impatient with us”) and the non-conformist (“suddenly I saw the four of us in a different way – as if we had a lot in common, as if we were a family. I realized that we were the sort of people whom the world regards as useless.”) She is scathing about the hypocrisy of social structures (including the police, the church, and the education system), but Drive Your Plow is also an indictment of animal cruelty, a reminder not to stand in judgement, not to dismiss those who are different from ourselves, and not to underestimate those we disagree with. Yet this is not a “preachy” novel (indeed, those who use pulpits – whether religious or hunting ones – tend to meet a sticky end); on the contrary, it’s thoughtful and thrilling.

As in any murder mystery, we are given several clues that we might gloss over. However, one overt clue comes after the discovery of the first dead body:

Only his right index finger refused to submit to the traditional pose of politely clasped hands but pointed upwards, as if to catch our attention and put a brief stop to our nervous, hurried efforts. ‘Now pay attention!’ said the finger. ‘Now pay attention, there’s something you’re not seeing here, the crucial starting point of a process that’s hidden from you, but that’s worthy of the highest attention. Thanks to it we’re all here in this place at this time, in a small cottage on the Plateau, amid the snow and the Night – I as a dead body, and you as insignificant, ageing human Beings. But this is only the beginning. Only now does it all start to happen.’

This is a novel of fate, of fatality, of fatalities, of fatalism. When you reach the end, you know there was no other way it could have gone: as Mrs Duszejko would say, it was all governed by the stars. It is not up to us to deem some things unimportant, Tokarczuk reminds us – the most insignificant detail or person may prove to be the key to enlightenment. I commented in my review of Flights that I believed we are given prompts for how to read it within the book itself, and this happens again with Drive Your Plow: the narrator tells us that “one must keep one’s eyes and ears open, one must know how to match up the facts, see similarity where others see total difference, remember that certain events occur at various levels or, to put it another way, many incidents are aspects of the same, single occurrence. And that that the world is a great big net, it is a whole, where no single thing exists separately; every scrap of the world, every last tiny piece, is bound up with the rest by a complex Cosmos of correspondences.” That this assertion is, primarily, about astrology, is no coincidence: Tokarczuk describes her writing as “constellation novels”, things that she throws up into space, and which the reader’s own imagination clusters together. And sure enough, when I went back over my notes, I realised that I had highlighted all the keys to the murder mystery, yet I had not managed to decode them until the end. For though we are given these clues, they are destabilised even as they are laid before us, as Tokarczuk makes a wry comment on writing itself, and on its ability to mean something other than what it says: “In a way, people like her, those who wield a pen, can be dangerous. At once a suspicion of fakery springs to mind – that such a Person is not him or herself, but an eye that’s constantly watching, and whatever it sees it changes into sentences: in the process it strips reality of its most essential quality – its inexpressibility.” I’ve noted before that Tokarczuk gave me the unsettling feeling that every original thought I might come up with had already been foreseen by her in the writing of her book, and this feeling was with me again as I thought about my reading of Drive Your Plow.

There is something deliberately old-fashioned about Drive Your Plow: certain nouns are given capitalisation (“Souls”, “Night”, “Person”, “Anger”, “Dusk”, etc), and there are near-archaic turns of phrase such as “whence they came” fairly regularly throughout. There is no mimicry of writing style, though; rather, it seems to be a nod to influences (such as William Blake, whose poetry stands by way of epigraphs to each chapter, and from whose work the title of the book is taken) and timeless subjects (such as corruption, prejudice, justice and compassion). Tokarczuk shows that inhumanity in all its forms, towards any living being, should not be commonplace, with Mrs Duszejko asking “what sort of a world is this, where killing and pain are the norm? What on earth is wrong with us?” Yet Mrs Duszejko does not distance herself from this “us”, though she is on the edges in so many ways. Indeed, the thing that most interested me in Drive Your Plow (apart from the murder mystery itself) was the reflection on marginalised people. The narrator is an older woman, living alone, and her love of animals and belief in astrology lead those around her to label her as a “silly old bag”, “crazy crone”, or “madwoman”. She observes how the law enforcers, either incompetent or corrupt, dismiss her easily because they need no excuse other than her age and gender. Though Mrs Duszejko is undeniably individual, Tokarczuk uses her to expose universal issues of gender inequality, ageism, and the human condition, with other characters on the margins either reinforcing or contradicting her position. Take, for example, this philosophical reflection from her elderly neighbour, an invalid lesbian author:

‘You know what, sometimes it seems to me we’re living in a world that we fabricate for ourselves. We decide what’s good and what isn’t, we draw maps of meanings for ourselves… And then we spend our whole lives struggling with what we have invented for ourselves. The problem is that each of us has our own version of it, so people find it hard to understand each other.’
There was some truth in what she said.

Though other characters are allowed to pontificate, Mrs Duszejko has the last word on where truth lies, what is truth and what is not, what is partial truth and what is nonsense. But be careful not to trust such a narrator and believe her blindly: as she herself reminds us, “One has to tell people what to think. There’s no alternative. Otherwise someone else will do it.”

Tokarczuk is a gifted writer, and the translation by Lloyd-Jones is excellent. I’ve been truly impressed with Fitzcarraldo’s publishing choices and the quality of their translations: on the whole, they are not “light reading” – indeed, they are mirrors of Mrs Duszejko’s description of the universe, “a complex Cosmos of correspondences”, but those I’ve read so far are the kind of books that stay with you, and to which you return. Necessary books, groundbreaking books, brave books. Mrs Duszejko says that “I love crossing borders”, and that is exactly what Tokarczuk’s work does: Fitzcarraldo director Jacques Testard actively sought out a Polish author as a response to the backlash against the Polish community in the UK following the Brexit referendum, and so in reading Olga Tokarczuk, we are not only enriched by this extraordinary author, but we are also resisting xenophobia and the narrowing of borders. 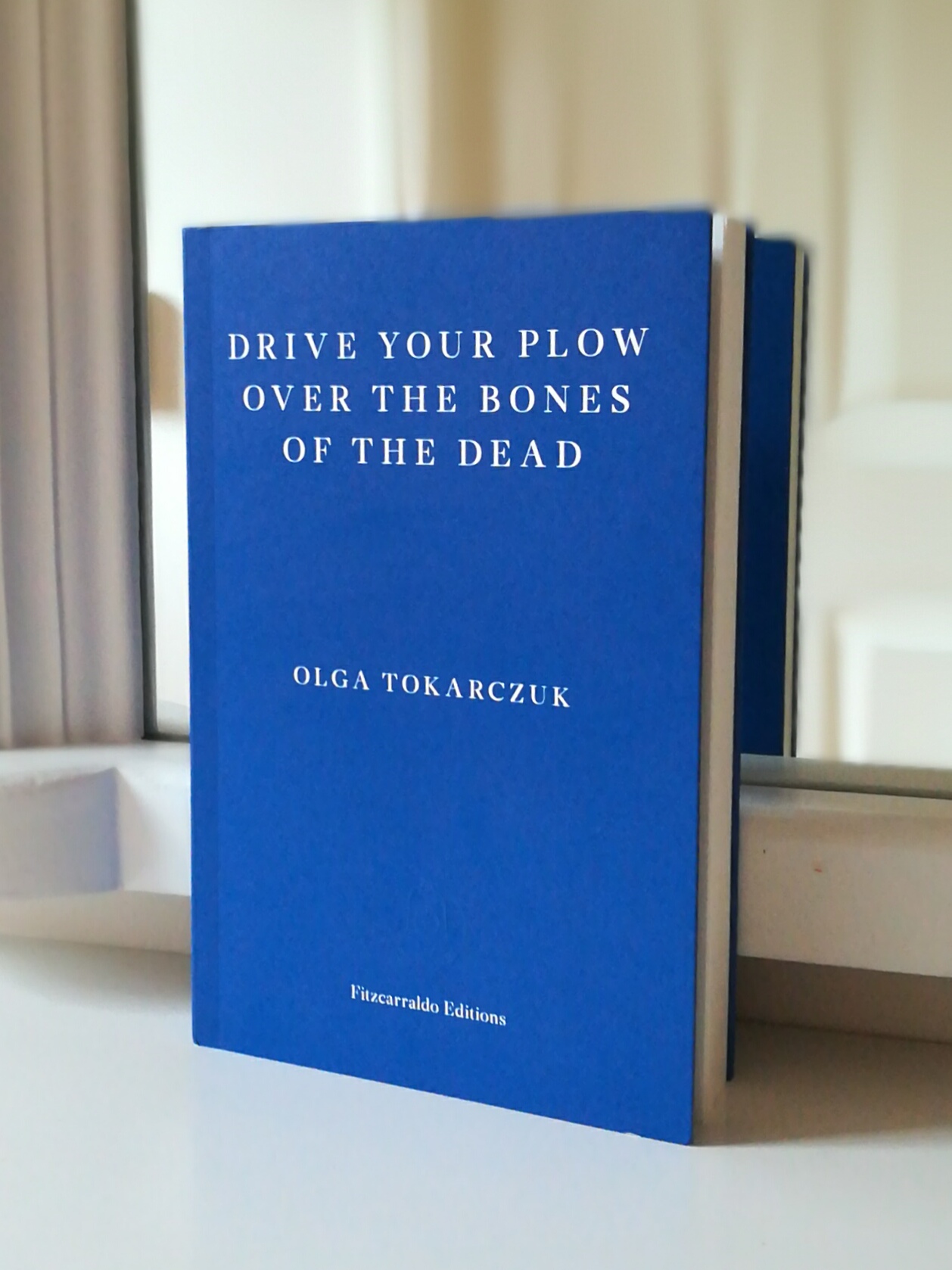