I took four books on holiday with me this year; though only one was a woman writer in translation, I wanted to showcase the diverse stories that accompanied me through the glorious heatwave of 2018… 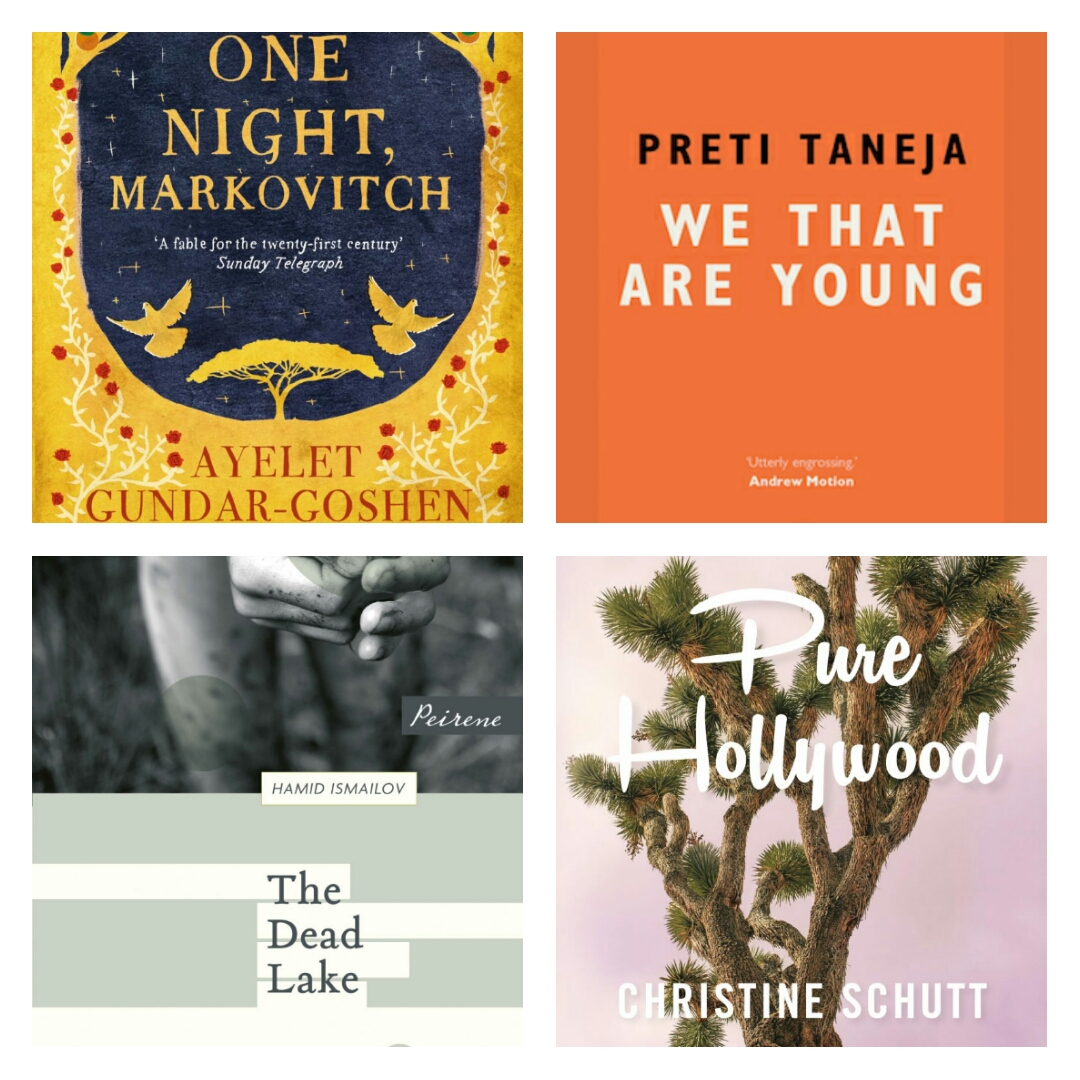 I chose one novel from an author I already liked (Ayelet Gundar-Goshen, One Night, Markovitch), one debut novel (Preti Taneja, We That Are Young), one recommendation (Hamid Ismailov, The Dead Lake) and one that came as part of a subscription (Christine Schutt, Pure Hollywood).

Earlier this year I read and loved Gundar-Goshen’s Waking Lions, so was fairly certain I’d enjoy her first novel, One Night, Markovitch, and chose it to kick off my holiday reading. One Night, Markovitch is the tale of two friends – the eponymous and “gloriously average” anti-hero Yaacov Markovitch, a man no-one looks at twice, and his larger-than-life best friend Zeev Feinberg, lover of women, teller of tales, owner of a magnificent moustache. Whereas no-one remembers Markovitch, Zeev Feinberg leaves legends in his wake: he is a man “whose mustache filled the valley and whose laughter reverberated throughout the entire country.” The two men have to flee their village in Eretz Israel when the butcher discovers that Zeev has been sleeping with his wife, and so Zeev’s friend, the deputy director of the Irgun, secures them places on a boat bound for Europe, where they and eighteen other men will marry Israeli women fleeing a world on the brink of catastrophe. Once safely in Israel, the new couples are to divorce; Yaacov Marcovitch, however, falls in love with his new wife, Bella, a beauty who belongs to “the Olympus of goddess-like women which would never admit Yaacov Markovitch, even as a servant.” He refuses to go through with the divorce, and this decision sets in motion a chain of events that unfold over decades, weaving together the destiny of all the characters and the choices they make. Lovers and foes are entangled and underestimated, and tragedy is never far away: “Bella Zeigerman’s mistake was more terrible than Yaacov Markovitch’s. For she was like someone who wants to cross a river she knows, saying, ‘I know it flows slowly’ and, taking no care, walks into it and drowns because it is winter and the water has risen.” Gundar-Goshen deftly blends humour and pathos – I laughed out loud at some points, but was choking up at others – and the storytelling is a thing of beauty, as is Sondra Silverston’s translation. I can see why it’s described as a fable; there is a lot about it which is a little fantastical, and on a bad day I might have found it slightly twee in places. There were no bad days on holiday, though, and so I found it utterly charming. I shall be keeping a close eye on what Gundar-Goshen publishes next.

Preti Taneja, We That Are Young (Galley Beggar Press, 2017)

Next up was the debut novel from Preti Taneja, who won the 2018 Desmond Elliott prize for this modern-day re-telling of King Lear, set in the palaces and slums of India. I can only speak about We That Are Young in hyperbole: it’s epic, turbulent, majestic, furious… Jivan Singh returns to India after more than a decade spent in America. He is the illegitimate son of the right-hand man of Devraj Bapuji, the head of “the Company”, a powerful corporation at the core of Indian life; on the night of Jivan’s return, Bapuji announces his shock retirement, dividing his company up between his daughters. The two eldest are the power-hungry Gargi (“Such a shame she’s getting so plump these days”) and PR-savvy Radha, ”polished to a Delhi-girl shine”, and Jivan watches on security monitors as the family is brought together to celebrate the arranged engagement of the youngest daughter, Sita, “a barefoot girl in loose, rolled-up jeans”, the most beautiful of the three daughters, and Bapuji’s favourite. But Sita absconds, for her heart lies with environmental issues and women’s education, not with the corrupt Company that pollutes India both literally and figuratively.

Taneja has grappled with every aspect of Shakespeare’s King Lear: nothing seems forced, despite the centuries and cultures that separate the two stories. In fact, the attention to detail is so meticulous that if you thought you might be spared the scene of eyes being gouged out, think again – even that gets worked in. We That Are Young will sweep you away into another world, but there is one small thing that gnawed at me: there are a number of typos and editing errors, and these dragged me back into the everyday, taking away from that glorious feeling of being transported elsewhere while the book is open. Nonetheless, this is an ambitious and urgent novel, and an incredible debut: We That Are Young is dark, frenetic, chilling, and it swept me along like the floods in the Napurthala basti, where Jeet (the legitimate son; Edgar to Jivan’s Edmund) is reborn. Taneja is one to watch.

Hamid Ismailov, The Dead Lake (Peirene, 2014), translated from the Russian by Andrew Bromfield

I discovered Hamid Ismailov’s work earlier this year, when I read The Devil’s Dance: when I was talking to my husband about it, he mentioned Ismailov’s The Dead Lake, which he had read and greatly enjoyed while judging the Independent Foreign Fiction Prize in 2015 (The Dead Lake was longlisted). He recommended that I read it, and I pass on that recommendation unreservedly: The Dead Lake is haunting and understated, and pulled me in right from the opening line (“This story began in the most prosaic fashion possible”). Yet there is nothing remotely prosaic about the story of Yerzhan, a young boy growing up in a small village on a bleak steppe in Kazakhstan, right at the heart of Soviet nuclear testing sites. Yerzhan is in love with his neighbour, Aisulu, and one day, on a school trip, to impress Aisulu he undresses and walks into the forbidden Dead Lake – a pool of radioactive water. Although nothing happens immediately, Yerzhan has cursed himself by entering it: he will never grow, and will remain trapped in his twelve-year-old body forever. We meet Yerzhan at the age of twenty-seven, a man in a child’s body, playing violin on a passenger train making its way across the steppe. The unnamed narrator is travelling on the train for reasons unknown, and Yerzhan tells the narrator his story; the narrator then re-tells the first-person story in the third person (from the two novels I’ve read, Ismailov’s original use of narrators seems to be a feature of his writing). The short introductory section ends on this reflection: “‘Does anything make any sense?’ he retorted, suddenly prickly again, and his question seemed to be addressed, not to me, but to this train galloping across the steppe, to this blazing steppe spread out across the earth, to this earth, adrift between light and darkness, to this darkness, which…” One individual’s experiences are set against the immensity of a majestic yet rapacious earth, and from this introduction Yerzhan’s story is set out in three parts: “Before”, “The Destiny”, and “The Salt of the Myth” – each with an alternative title composed of musical notes that echo both Yerzhan’s prodigious skills with a violin and dombra and his onward march to the final act of his story. It’s impossible not to admire Ismailov: The Dead Lake is tragic, yet never descends into melodrama, it’s a horror story without the hamming up, a star-crossed romance that has nothing trite about it. Andrew Bromfield’s translation is sensitive and stark, and Ismailov a force to be reckoned with.

There had to be a Year of Publishing Women book in my suitcase! Pure Hollywood is a collection of short stories by American author Christine Schutt. I confess that the short story genre isn’t generally my favourite (though Fish Soup may have converted me): I invest in the characters and then the page is turned on them; I start a new story still filled with thoughts about the last one; there’s always a disappointing one that I like less than the others.  I’m full of excuses for avoiding them, but I’m glad this one found me: Pure Hollywood is the antidote to vapid, happy-ever-after tales. It introduces, among others, a young widow left penniless after her (much older) comedian husband dies and leaves his wealth to his children, a fractious child whose desperate parents resort to a babysitter with tragic consequences, a snooty woman whose rudeness to a younger woman on a horse ride has (wait for it) tragic consequences, two ageing men coming to terms with the past and imminent loss of their respective wives, and a newly-wed couple who befriend a misanthropic painter with (you guessed it) tragic consequences. But though I may joke about Schutt’s penchant for eschewing a happy ending, the stories are refreshing and invigorating: they are not neat, at least not in the sense of being tied up with a pretty bow. They leave you to think and to wonder, they are written in a brutally poetic style (“He fell over the railing and cracked his skull and many other bones that gave him shape”), sharply observed (a white stucco wall, corsaged in bougainvillea”) and all too believable (“Mrs Pall-Meyer, the name suggesting a hyphenated importance, merely snorted and rode ahead”). But despite the bleak undertones of Schutt’s stories, they are far from depressing; rather, they showcase a pithy candour:

“Oh.”
The little oh was all that was left of Dan’s story, the one that played out in his head about a husband with a ponytail and his purposeful, dying wife. As far as Dan was concerned, Nancy Cork was a woman needful and deserving of more love than her self-absorbed husband could give, whereas he could give… oh.
He could not put a name to it or perhaps ever find it again.

Without a subscription, I probably wouldn’t have chosen this book, and so it highlights the valuable ways in which independent presses can influence reading choices.

So that’s my holiday reading rounded up for 2018. If you have any recommendations for summer 2019, I’m all ears!