On Monday this week, the longlist was announced for the Warwick Prize for Women in Translation. This is the second year of the prize, which was set up by the University of Warwick (UK) in 2017 to “address the gender imbalance in translated literature and to increase the number of international women’s voices accessible by a British and Irish readership”. It’s a welcome addition to the Warwick Prize for Writing, highlighting the importance of promoting literature from other cultures/ languages, and of offering greater possibilities and publicity to women writers.

The winners of the inaugural Warwick Prize for Women in Translation last year were Yoko Tawada and Susan Bernofsky, for Bernofsky’s stellar translation of Tawada’s Memoirs of a Polar Bear. I was surprised by how much I enjoyed Memoirs of a Polar Bear (surprised because usually I’d think that animal narrators are firmly “not my thing”, but you’ll see a review of it here before long, in which I’ll acknowledge how my own literary prejudices are collapsing!) and Bernofsky is an immensely accomplished translator. Memoirs of a Polar Bear was published by Portobello Books, whose women in translation catalogue I love almost unconditionally; I was sad to learn recently that as of 2019 Portobello will cease to exist, as the imprint will be shuttered by Granta Books. This might not be as dire as my slightly over-reactionary response led me to fear when I read the news: Granta has committed to no change in output, and still has a good record of publishing women in translation. So hopefully Portobello’s “identity” won’t be lost, though I shall miss the Portobello imprint and always feel a special connection with their list, since it was a Portobello book that kick-started this project. So, through my misty-eyed regret, I’m delighted to see that Portobello has two books longlisted for this year’s Warwick Prize for women in translation: Bernofsky features again with her translation of Jenny Erpenbeck’s Go Went Gone (this has the potential to be a winning combination, since Erpenbeck and Bernofsky won the Independent Foreign Fiction Prize in 2015 with the magnificent The End of Days). Also on the longlist is Han Kang’s incandescent The White Book, translated by Deborah Smith, and reviewed here last week; this is another winning team, Han and Smith having won the first Man Booker International prize in 2016 for Smith’s translation of The Vegetarian (also for Portobello Books). Unsurprisingly, Olga Tokarczuk’s Flights, winner of the Man Booker International Prize 2018, is also on the longlist, and I may just eat my hat if it doesn’t make it to the shortlist with Jennifer Croft’s beautiful translation for Fitzcarraldo Editions. So these three are certainly going to be hard to topple, but the shortlist is by no means a given: other contenders are the Man Booker International shortlisted Vernon Subutex 1 (Virginie Despentes, translated by Frank Wynne for Maclehose Press), and Maclehose also have two more books on the longlist, Daša Drndič’s Belladonna, translated by Celia Hawkesworth, and Żanna Słoniowska’s The House with the Stained-Glass Window, translated by the inimitable Antonia Lloyd-Jones. That gives Maclehose the numerical advantage with the highest number of entries on the longlist; Portobello books, Fitzcarraldo Editions and Norvik Press each have two, and Istros Books, Pushkin Press, Clerkenwell Press, 4th Estate, Scribe Publications and Penguin each have one on the list.

It will come as no surprise to you that I’m delighted to see some of my favourite books of the past year on this list, but I’m also excited to see some I haven’t read yet, or hadn’t previously heard of. Most notably in terms of “ooh yes, I’ve been meaning to read that one”, I’ve heard many good things about Esther Kinsky’s River (translated by Iain Galbraith for Fitzcarraldo), and I have Fiona Graham’s translation of Elisabeth Åsbrink’s 1947: When Now Begins (published by Scribe) waiting on my to-read pile. 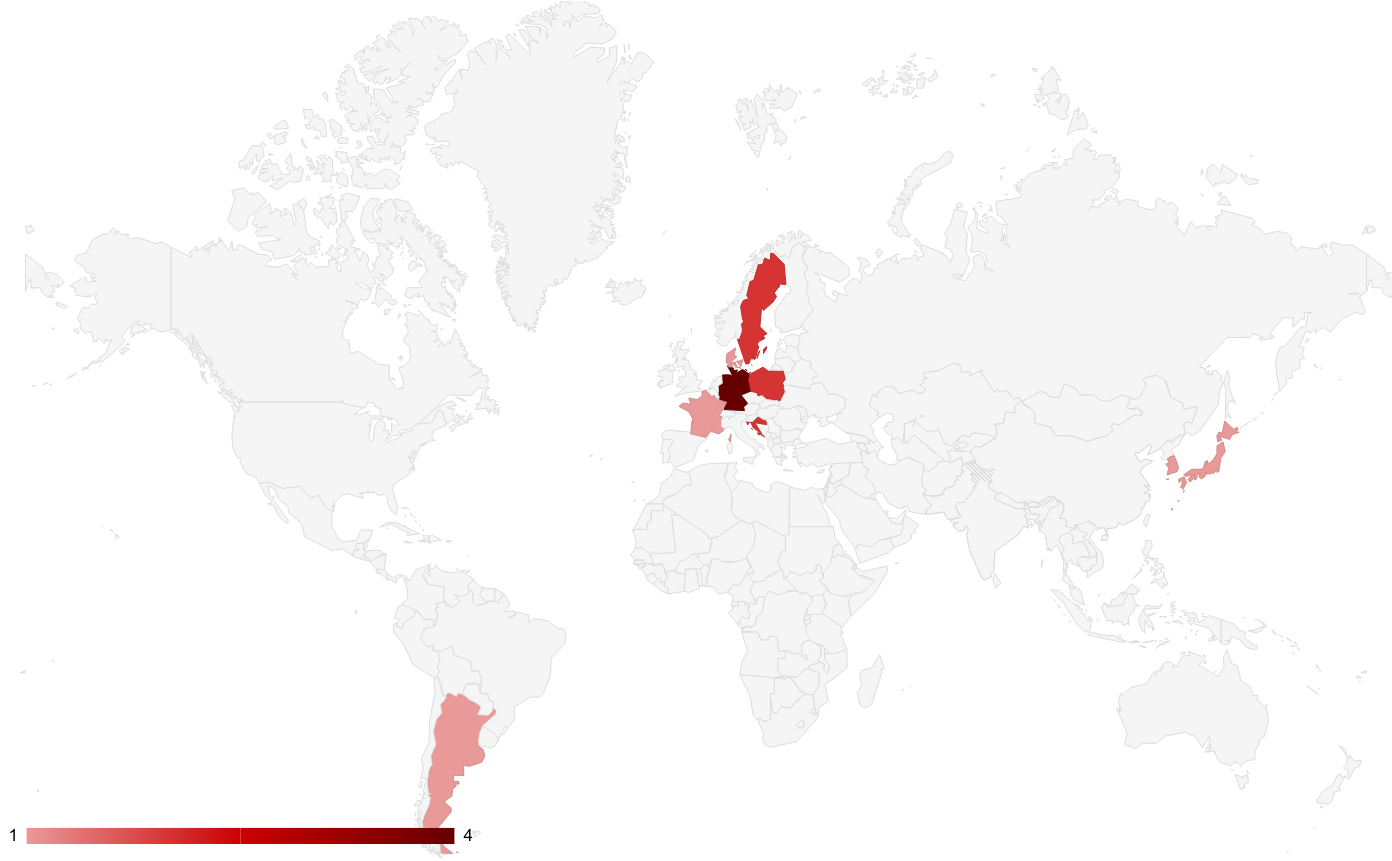 The Warwick Prize for Women in Translation 2018 longlist by country

There is a predominance of European writing on the longlist: apart from one book each from Argentina, Japan and South Korea, everything comes from Europe. I’ve geo-mapped the countries represented in the longlist to show this more clearly: the darker the colour, the more titles from that country. You can see that Germany features most prominently in burgundy with four entries, Croatia, Sweden and Poland are all well represented in red (two entries); the pale pink for the other countries on the longlist indicates one entry.

There is also a wide variety of genres represented: as well as the genre-defying “constellation novel” Flights, the incantatory The White Book, and a selection of novels, there are also, firstly, three short story collections: Judith Hermann’s Letti Park, translated by Margot Bettauer for the Clerkenwell Press, Yuko Tsushima’s “modern classic” Of Dogs and Walls, translated by Geraldine Harcourt for Penguin, and the first translation of a recently rediscovered writer (Jessica Sequeira’s translation of Sara Gallardo’s Land of Smoke for Pushkin Press). The short story genre is one I’m coming round to appreciating, after years of considering it “not my thing” (since that’s the second time I’ve used that phrase today, and on the subject of adjusting my parameters of what constitutes “not my thing”, I read a very interesting review this week in the LA Review of Books: V. Joshua Adams reviewed Mark Polizotti’s Sympathy for the Traitor: A Translation Manifesto and pointed out some of its flaws with the magnificent maxim that “there is something wrong with confusing your lack of interest in something with its lacking merit”. This is my new motto, and I am rapidly coming round to the merit of the short story genre!)

Also on the longlist for the Warwick Prize for Women in Translation are a memoir by Katja Petrowskaja (Maybe Esther, translated by Shelley Frisch for 4th Estate), a piece of auto-fiction (Hair Everywhere, Tea Tulič’s account of three generations of women coming to terms with loss, translated by Coral Petkovich for Istros Books) a work of non-fiction (Bang by Dorrit Willumsen, translated by Marina Allemano for Norvik Press), and a new translation of the first female winner of the Nobel Prize in Literature, (Selma Lagerlöff’s The Emperor of Portugallia, translated by Peter Graves for Norvik Press). This strikes me as a very diverse list – perhaps not in terms of geography, but certainly in terms of genre. On the subject of geographical/ cultural diversity, I’ve been doing similar geo-mapping for all women in translation texts published by independent UK publishing houses so far this year, and it’s fair to say that the longlist for the Warwick Prize for Women in Translation is reasonably representative of the general spread; the main difference is that there is more coming from Latin America than is indicated by the longlist.

As for my partisan view on which one I hope will win, I have to preface it with the acknowledgement that I have not read them all. Regular blog readers will already know which ones I have read and loved, but I think I’m going to put my hand in the fire and come out and say it: I’m rooting for The White Book. Of those I’ve read, it was the one I reacted most emotionally to, and although it’s got some tough competition (even as I write this, a voice inside me is screaming “but what about Flights?!”, and no doubt you’ll all have your favourites too) but there was something about The White Book that made me respond to it with all of my senses and with my heart, and so, as is usually the case, I’m letting my heart decide. One thing’s for sure: the judges (Amanda Hopkinson, Boyd Tonkin and Susan Bassnett) have a tough decision to make. Congratulations to all the wonderful authors, translators and publishers on the longlist, and don’t forget to check the official website for the Warwick Prize for women in translation in early November to find out the shortlist!

For further information about the Warwick Prize for Women in Translation, contact Dr Chantal Wright at the following email address: 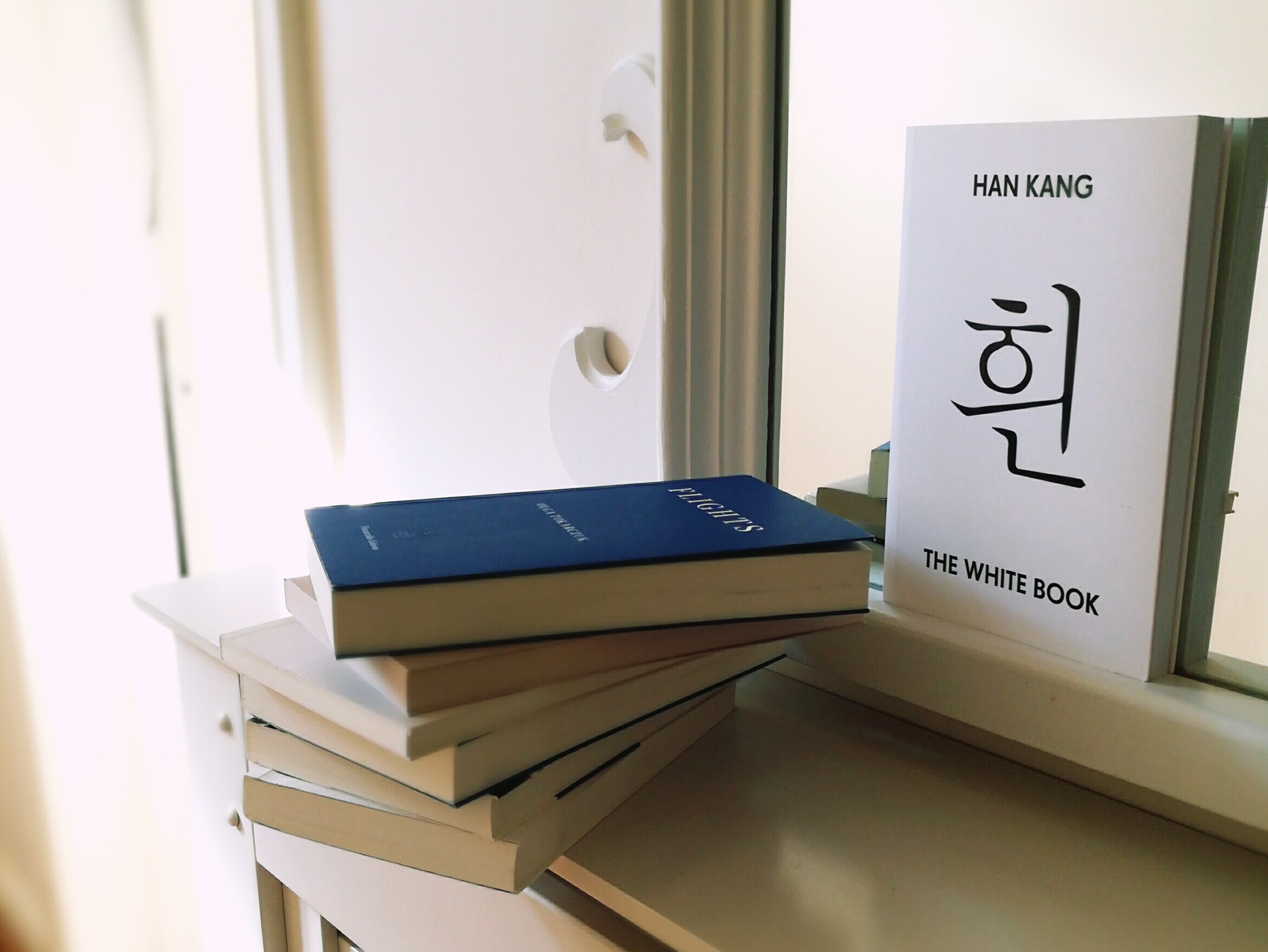