I’m delighted to welcome to the blog feminist translator Beatriz Regina Guimarães Barboza. You can find out more about Beatriz and her work on the guest contributor page; today she’s sharing a compelling in-depth discussion of her translation of Luiza Romão’s ‘book of rage’, Sangria, in a post that is particularly timely given the presidential election in Brazil next week.

When I first heard about Luiza Romão’s Sangria (doburro, 2017), it seemed to me exactly the sort of book I was looking for in contemporary Brazilian poetry: inventive, outrageous and felt with deep consciousness of sound and rhythm. So vivid that you could imagine it coming out of the page, inscribed in and for the body (for Luiza is a slammer and actress, too). It is a book of rage against the cruel History of Brazil, a past of colonization by the Portuguese and later the imperialistic forces of the USA (until today), with a gendered perspective of several forms of oppression that emerged from this process. 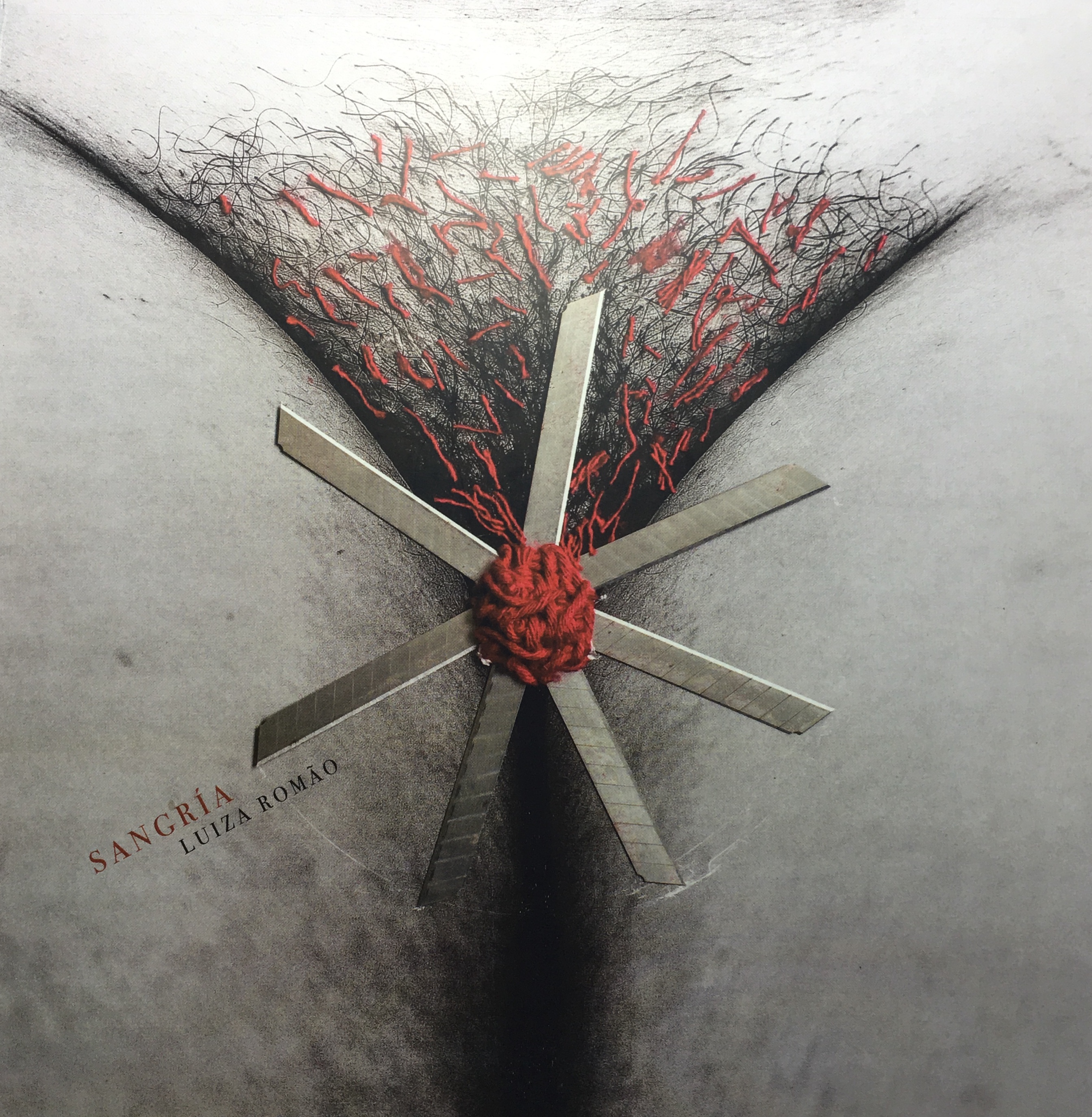 The book is composed of 28 poems, mirroring the days of a period cycle, and several monochrome pictures of Luiza’s own body, covered with red threads weaving different shapes that denounce violence. In the preface, Heloisa Buarque de Hollanda, a notorious intellectual and writer in Brazil, says that “the chosen path was of activating a process of continuous weaving (à la mode of female embroiderers and weavers) between the menstrual cycle, that is, parting from the female organism’s reproductive potential and the revision of oppressive episodes of Brazilian History”. Brazil’s History was (and still is) marked by domination, just as women are, because State violence is not separated from gender and sexual hierarchies (with huge influence of the Catholic Church since the colonization, and, recently, the Neo-charismatic movement), with capitalist inequalities that reflect racial segregation. Luiza Romão exposes all this and shows that women can fight, from within, and not only for their material struggles, but also for their hearts and souls, these issues brought together in a political claim of a feminist writer in Brazil.

The violence that Latin American countries suffered, with the slaughter of indigenous societies and years of slavery of people captured in Africa because of colonization, mostly came from Portugal and Spain, so we share this burden with our Spanish-speaking neighbors. Maybe because of that and to reach wider audiences, Luiza chose to publish a bilingual book: Sangria has the original Brazilian Portuguese on one side of each page, and a Spanish translation by Martina Altalef on the other.

As a feminist translator, I felt truly glad to have the opportunity to translate her book into English, but also knew the heavy responsibility of doing such a thing. Luiza came to me because she was looking for women translators from English and a mutual colleague, Isabela Rossi, introduced us to each other. People knew I was a MA student of Translation Studies at the Federal University of Santa Catarina, working with the translation of Anne Sexton’s poems to Brazilian Portuguese with a feminist approach. However, it was quite a challenge to work the other way around: from Brazilian Portuguese to English. And just a brief note: just as there is not a “standard English” that fully represents the several uses of the language around the globe, there is not a “Brazilian Portuguese” that is the same within the whole country, but this debate demands more than I have scope to discuss here. I will limit myself to making the point that I translated Sangria, published in São Paulo, one of our major cultural poles, to the type of English I could learn in Brazil, highly influenced by the USA. It was the first time I would do this, so I asked Luiza to read the translations and see if they sounded good to her. I also asked if it was possible to pay for a reviser of English, because I had the skills of poetry translation, but several uses of the language were not known by me, as I am not used to writing in English). Fortunately, Luiza knew Lâmia Brito, an excellent reviser who changed several details of my translation, questioning choices that were actually big mistakes of mine, and reassured me regarding most of what I had done. And there was one more aspect that had impact: my knowledge of Feminist Translation Studies, which helped me understand the ideological dimension of translating a book from outside the “main world literary system” (as Brazilian writers are still very little read outside Latin America), and that some things should not be rendered easy to be read in English but retain their Brazilian identity. Even more important than that, this made me aware of dealing with particular features of a language with a gendered grammatical system, like Portuguese, and how to maintain Luiza’s feminist issues still visible in English (which erases gender marks in verbs, adjectives and nouns).

At the very beginning of the book, in the poem “Day 1. Full Name”, as Luiza recounts Brazil’s History, some references are not known for people outside Brazil, for example, “dops”, the initials of the Departamento de Ordem Política e Social, that was a government agency of censorship and repression. That’s why the book already contains some footnotes for the Spanish translation by Martina Altalef, which I translated into English, and that was enough to deal with the needs in question, as I could manage to maintain the rhymes in the stanza.

Following in the same poem, the poet uses words with conceptual dimensions: palavra-mercadoria is not only a compound noun to refer to words as products, but uses mercadoria, a word very common in Brazilian translations of Marx’s idea of commodity fetichism. In Brazilian Portuguese, fetichismo da mercadoria. That’s why I translated it as commodity-word, although in Brazil commodities are generally associated with primary goods that are negotiated in stock exchanges, and mercadoria is seldom translated as good or merchandise. I wanted to keep the reference to a Marxist concept as it is known in Brazil and Luiza really approved of this, for she wanted to keep this genealogy of terms.

In “Day 2. Date of Birth”, she uses the word mestiça, used in Brazilian Portuguese to refer to women with interracial origins, hat has a whole past (and present) of gendered and racial stereotypes that suffered (and suffer) oppression. Brazil is known as a country of miscegenation, but this process was very marked by exploitation, violence, rape and prejudice, with different specificities from the process that happened in the USA, for example. So, it couldn’t be the same to translate this term into English. However, it wouldn’t sound so strange for the anglophone readership, for Gloria Anzaldúa’s use of the word mestiza (in Spanish) for Mexican women in the USA it is very know my some writers and scholars, as it is seen in Borderlands/La Frontera: The New Mestiza (1987). I talked to Luiza about that, and she agreed that we would keep the word without translating, in Brazilian Portuguese (mestiça) to mark the difference from the Spanish word (mestiza), and retain the cultural specificity of Luiza’s work.

In the same poem, one decision involved all three of us: poet, translator and reviser. Luiza played with the word minas, which is the first name of one of the first states to be explored in the race for gold, Minas Gerais, and is also a slang for “chicks” as young women, in the following excerpt

When I first translated the text, I wrote to Luiza that I could not keep the double meaning of minas, for she was talking about our country’s birth by force, the gold exploration of Brazil by the Portuguese, and also the lives of women. So, she said she preferred to keep the reference to Minas Gerais and lose the slang, because it was more important to situate this, and her whole poem was discussing gender matters linked with History. Then, the first translation was:

In the source text, there is strong trochaic rhythm in the first verse of the excerpt and one more distended in the second. Also, the alliterative sound of [m] and the assonance of [i] between idos and minas. Fortunately, I could keep the rhythm and the sound, so important to the poetry of a slammer such as Luiza. However, Lâmia, the reviser, found the sound was too heavy at the end, “more”, and the original has the most open vowel of Portuguese in mais, the [a]. There was a partial rhyme between idos and mais, because of the plural, the trochaic rhythm and the sound of [i]. That’s why she suggested inverting the verse, and we all thought it was better:

Just one more example, to show how questions of grammar affected her gender debate: In the poem “Day 3. Register Number”, Luiza reverses the gender of nouns and adjectives to criticize sexism, showing that “not only grammar/ suffers from gender agreement”. I could not keep that trace in English, for there was no grammatical gender I could reverse and I would have to interfere in all words to make that visible. So I chose to write a footnote, which Luiza agreed would be the better option. This kind of procedure had to happen more times, and so I suggested Luiza that it would be better if the English version had a preface talking about this topic, to explain to anglophone audiences how to notice in the source text which words are written in the feminine and which are in the masculine.

As you can see, in the very first three poems of Sangria/Bloodletting, I’ve chosen some aspects to show the deepness of reflection that the translation had to go through, and from the perspectives of three women with different relationships to the text. Questions of sound, rhythm, imagery, History, gender and class struggle all mattered. Many choices depended on the perspective of Luiza Romão and the knowledge of Lâmia Brito, and my own reflection derived from the readings of Olga Castro, Luise von Flotow, Mona Baker, to name just a few. Although indirectly, this range of readings that affected my reflections were supported and developed by our group at the Federal University of Santa Catarina, the GEFLIT (Group of Feminist Studies on Literature and Translation), with Naylane Matos and Sheila Santos, for this makes part of our own research projects and, as you can see here, impacts on my work as a translator. So, let’s keep reading, studying and translating women, together.

And, in the spirit of solidarity and inclusivity, please look at the hashtag #EleNão, and support the movement if you feel it appropriate.