In the final instalment of my mini-series of interviews about new Montenegrin novel Catherine the Great and the Small, I talk to translators Ellen Elias-Bursać and Paula Gordon about the importance of translating this book, its challenges and its joys.

Catch up on my interviews with author Olja Knežević and publisher Susan Curtis, and order Catherine the Great and the Small directly from Istros Books here. 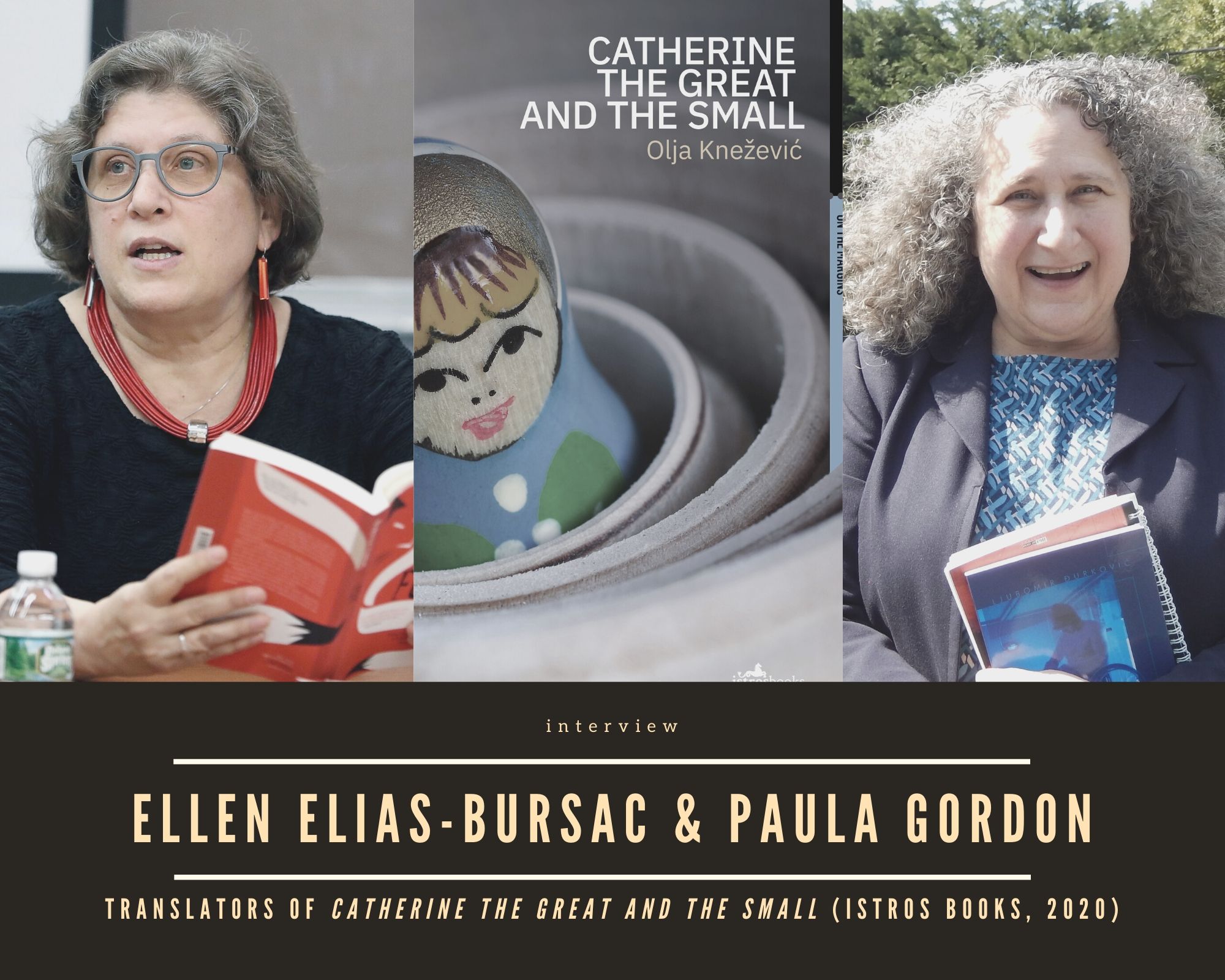 How did you come to this book, and why is it significant that it will now reach an English-language audience?

Ellen Elias-Bursać: I was approached by Diana Matulić of the Corto Agency, asking if I would consider translating the novel, which had won the VBZ novel of the year award. As soon as I read the first few chapters, I saw that the novel had promise and would be wonderful to work on, but I was overwhelmed with other commitments at the time. I proposed collaborating with Paula Gordon: she is an excellent translator and has had experience translating Montenegrin writers in the past, which I have not had. The thought of collaborating with Paula made it possible for me to take on the project.

Paula Gordon: This might well be the first novel by a contemporary woman author from Montenegro to be translated and published in English. I’ve never read another book that celebrates a woman’s individuality the way this book does. And not only the individuality of the heroine, but of every woman and girl who crosses the page and at every age and stage of life. It acknowledges our fantasies and even fulfils them in its pages, but it doesn’t sugar-coat the unexpected and sometimes unpleasant consequences of getting what we wish for.

Where do you perceive your responsibilities to lie when you translate? Do you prioritise the “foreign-ness” of the original text or aim to bring the text closer to English-language readers in your translation choices?

EE-B: My responsibilities when I translate lie first with the author/text. Of course the reader is always part of my reading, because I’m a reader. In this case there were two of us reading together. My first step is to understand the nuances in the novel, the voices, the emotional intensity, the humour, the tragedy, and find ways to feel them clearly enough to articulate them.

PG: I don’t have a hard and fast rule on fealty, it depends on what I’m working on. In the case of Catherine the Great and the Small, my loyalty changed over the translation process. When I started, I was focused on the text – on bringing out the meaning, what’s happening in the story. Once we had a draft, attention shifted to making sure our understanding of the text matched the intention of the author. Finally, no matter how attached one is to a turn of phrase or thinks it expresses the meaning of the original text in just the right way, if readers don’t get it, then we have to adjust. So when editing the translation, we kept the reader in mind. Not only in terms of meaning, but also how the text flows – we don’t want to bring the story to a halt because of our insistence on a description of, for instance, the smell of a wild plum that grows nowhere else but in a specific village on the Montenegrin coast.

What were the greatest challenges of translating Catherine the Great and the Small? Did the translation of context – specifically the glimpses into the troubled recent past of the Balkans – have an impact on you, or pose any particular challenges?

EE-B: We decided to leave references to politicians and historical events in the translation and then see how to communicate them. In some cases we added a word or two to clarify the reference, such as referring to the name Podgorica as the city’s ‘new old name’. We also decided readers might find an afterword handy in which we could provide an explanation in greater depth of some of the more arcane references. Hence, in the afterword, we explain the change of name of Montenegro’s capital city from Titograd, in the first part of the novel, to Podgorica in the second part. But in general, my approach has been to trust the reader’s acuity and not talk down or simplify a book for an imagined ignorance. I see it as my job to translate the cultural references that are in the novel with either internal glosses or explanations in the afterword (I don’t like footnotes in translations of fiction), and it’s the editor’s job, once he or she has the translation before them, to decide whether some of the cultural references are, perhaps, too local to be of interest to a reader of the translation.

PG: The most challenging parts of the book for me to translate were the descriptive passages that referred to times gone by and the “party scene” in the hair salon, where everyone has an attitude and a motive, not always voiced. The descriptive passages are full of nostalgia and emotion, but they are also very specific. The author could use just a few words, mention certain specific ubiquitous items from the time period to evoke a feeling in her readers. But for readers who never experienced a town square farmers’ market in 1980s Yugoslavia, we have to strike a balance between wanting the reader to have a clear picture of the scene but also wanting to retain that hazy veil of nostalgia.

I found the context of Montenegro and Serbia on the brink of war fascinating. This book sheds light on what that time looked like from a woman about my age, someone not involved or interested in politics. The most affecting parts of the book for me were not war-related. They were scenes in which I put myself in Katarina’s shoes in order to understand and express in English her physical experience and emotional state.

What are the challenges of translating a text so rooted in a culture that may be unfamiliar to many English-language readers?

EE-B: As this novel moves back and forth between England and Montenegro, and part of it is about bringing Katarina’s children for the first time to see the country where their parents are from, the narrative includes many explanations of cultural differences. Indeed, the protagonist’s position in between these two worlds means that she has a heightened awareness of these differences and is constantly negotiating her way back and forth among them. This made the need to explain these points less of a challenge than it might be in some novels. As far as syntactical differences go, a great deal is implicit in inflected languages like Montenegrin. The relationships of the parts of the sentence are made clear through the grammatical endings, while these same relationships need to be made explicit in English where we organize our syntactic material through word order. In Montenegrin, for instance, you can have a sentence in which you have the actions of two women or two men described—one the subject and the other the object of the sentence—and, using only pronouns, you’ll be able to tell which of the women or men is the doer of the action and which is the recipient of the action, because the case each pronoun is in will tell you who is doing what to whom. In English one of these women or men will have to be referred to by name or you’ll be lost.

PG: This book depicts a time of transition from a closed culture to a more open one. The characters themselves, right at this time – late 1970s into the 1990s – are living through changes in their culture brought about by more interaction with the West and by the West seeping into their everyday life: television, music, film, travel, books. But I think that all readers are capable of making the leap into the world of a novel, whether it is based on true events or is science-fiction fantasy. In a book like this, I think our job is to keep the reader engaged and in that world, with only as much explanation as is absolutely necessary.

Did you have any contact with Olja Knežević while you were translating, and how did you approach the co-translation?

EE-B: Olja was an enthusiastic participant in the process, but Paula and I worked to resolve absolutely everything we could on our own before we went to Olja for clarification. Paula translated the rough draft, and then I went through and edited her translation. Then we went through the whole book, reading it to each other for three hours a day for a week, and discussing every twist and turn of the narrative. Paula has the sharpest editorial eye I have ever witnessed in action and I’m humbled and grateful at the quantity of issues she spotted which I didn’t notice.

PG: Regarding our approach to co-translation, Ellen suggested that I produce the initial draft and that she would edit. This worked with our schedules early in the process. We knew that we would send the drafts back and forth and that in the end we would read the translation aloud (an idea Ellen credits to translator Daniel Hahn). And we did just that. I sent her a translated section, and I continued translating while she reviewed my work. When she sent her edits back to me, I was able to spot patterns in her changes and I kept those in mind as I moved forward in the initial draft. In hindsight, I felt much freer to put my stamp on the translation than I would have with the roles reversed. Given the chasm between Ellen’s level of experience and my own, I believe I would have followed Ellen’s lead and interpretation had she originated the text, and I don’t know that I would have been as creative with my editing input as I felt empowered to be in the translation.

Did you deliberately give the characters distinctive voices that meshed vulgarity with a more formal register? Do they speak like this in the original, or was it a choice regarding their characterisation in the translation?

EE-B: The original has a great richness of voice, humour, cadence, intonation, colloquial usage. Some of the characters are cranky elderly people, others are small children, or young adults steeped in the drug scene in pre-war Belgrade, and they all have distinct ways of speaking. We chose to bring a like variety and richness to the English. We translators often say that if a joke, or quirk, or cadence can’t readily be replicated at exactly the same moment in the narrative, the point is to find somewhere else where something along those lines will work. This breathes life into the characters and keep the narrative vital and engaging.

PG: The characters in this novel are fully formed, and the way they speak in Montenegrin or Serbian, or English in the case of the children born in the UK, oozes personality. The decisions in this regard were taken with the goal of bringing the characters to life in English, to be as true to them as possible. Vulgarity and formality are part of everyday expression in the lands of this novel, and the characters’ manner of speaking reflects this. In giving voice to Granny, for instance, it helps that I know a few women of her generation, including a “city grandma,” who used to surprise me with the vehemence of her opinions and the language she used to express them, all the while performing the formal rituals of  hospitality. In the novel, these slips into vulgarity, or intentional provocations, provide glimpses into the inner lives of the characters, and it’s to Olja’s credit that she gives such depth to the characters – they seem to exist in the world of the novel apart from their contributions to the plot.