*Details of the virtual launch of Holiday Heart at the end of this post (or click here if you can’t wait) – it’s going to be fabulous – and free!*

Meet Pablo and Lucía, two extremely unlikeable protagonists whose marriage is breaking down in the wake of Pablo’s infidelity. Although this, like everything else in Margarita García Robayo’s universe, is a seemingly simple situation which belies deeper emotions and greater complexities that we are invited to scrutinise, however uncomfortable it makes us. 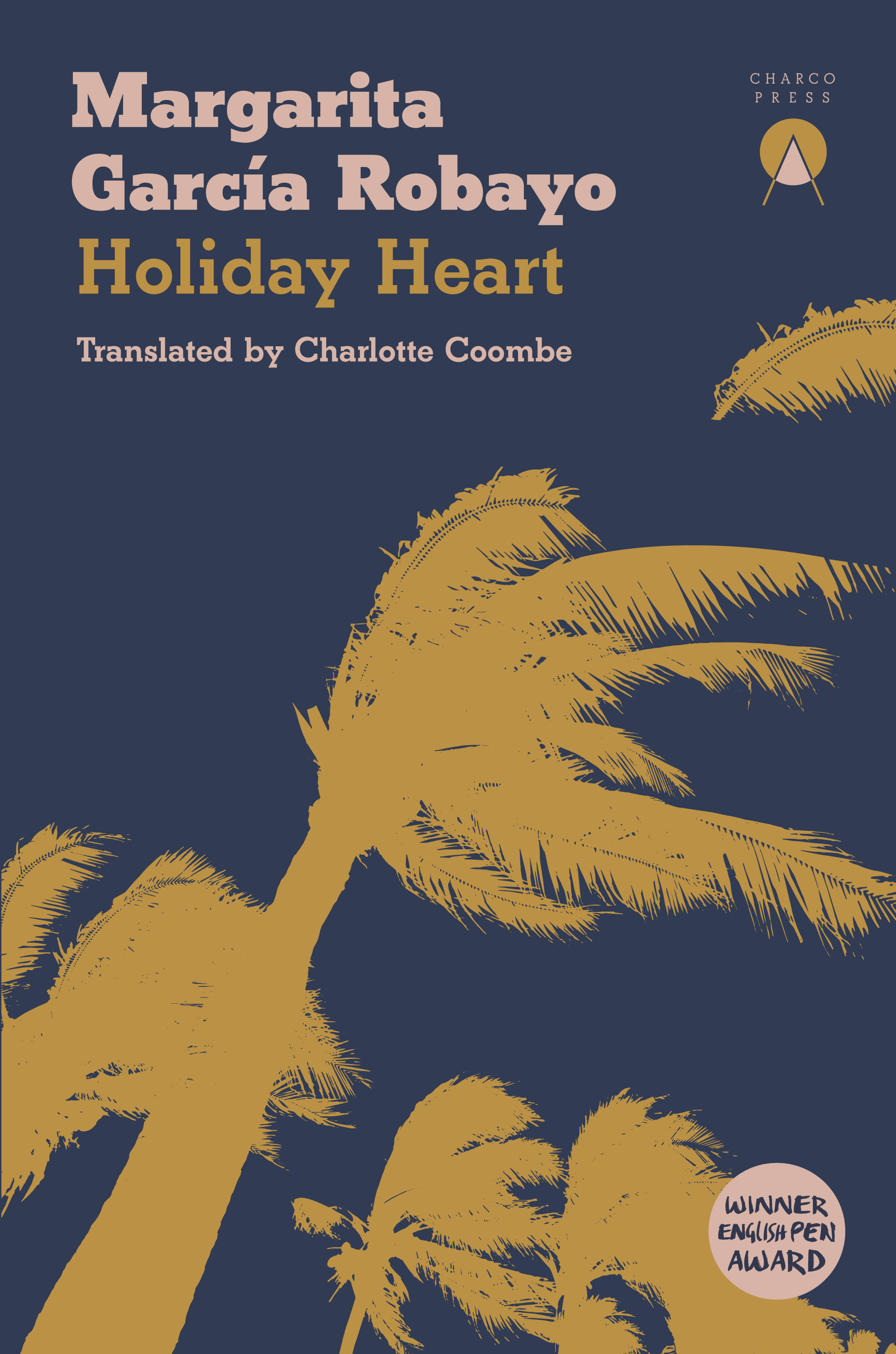 Just as in García Robayo’s previous collection Fish Soup, the characters in Holiday Heart always disappoint: they never do the thing you hope they will do, the thing that might redeem them. Pablo and Lucía are quite deliberately antagonistic towards one another, and towards almost everyone else around them. Even their twin children Tommy and Rosa are not spared from this: in the first few pages the twins are described as “like two organs, easily removed”, Tommy’s irritating habit of responding to all questions with an apathetic shrug is introduced, and Rosa’s yawning mouth is “wide enough to fit a clenched fist inside.” Maternal tenderness this is not: gestating twins was, according to Lucía, akin to aliens taking up residence in her body. As for Pablo, he feels excluded from Lucía’s parasitic relationship with their children, but finds an outlet for his self-pity in energetic sex with a neighbour he doesn’t even like.

So how did Lucía and Pablo make it this far? Depressingly, because they just couldn’t be bothered to do otherwise. Their relationship amounts to nothing more than an accumulation of time which has made them strangers to one another: “The first symptom is disinterest, something miniscule that then becomes normal, and then both people stop wondering why they’re still there, oozing with indifference towards one another, agreeing with what the other says as a formality: the time long gone when what they said seemed interesting. Or worth listening to.” Neither Lucía nor Pablo can move beyond where they are, even as they believe in the impermanence of everything; their relationship represents no more than “piles of dead time, which nobody has bothered to clear away.” So don’t be fooled by the deceptively romantic title: a “holiday heart” is not a summer fling, but a life-threatening illness. The Spanish title, Tiempo muerto (“dead time”) focuses on this notion of relationships as simply an accumulation of time spent together – wasted time, time that is over. The English title is the one García Robayo had originally wanted to give Tiempo muerto, and works brilliantly; not only does its artful frivolity hint that nothing is as it seems beneath the family’s facade of success and happiness, but its focus on Pablo’s condition – the single event that crystallises all of this “dead time” – shows how everything is brought to a head and the veneer cracks irreparably.

Lucía and Pablo are caught in the in-between space: they left Colombia to move to the US in pursuit of the American Dream, but its sad and sordid reality is mercilessly exposed (even the fruit is too bright and shiny to be real). They are outsiders there and now belong nowhere: they have rejected their working class origins, but have never ascended the social ladder in the way they hoped; they are stagnating in their location, in their social status, and in their marriage. Middle-aged, middle-class and mediocre, Pablo and Lucía’s most irredeemable characteristic is that they are, quite simply, racist. It’s uncomfortable at times: I winced at a particular word, which I can’t even being myself to write here. But such words exist, and are used, and if we don’t feel uncomfortable reading them then I think we need to ask ourselves why. That itself is one of García Robayo’s particular talents: she holds a mirror up to her readers, makes us ask how complicit we are in the perpetuation of these loathsome attitudes even as we denounce them. For this is not the overt and brutal racism that makes headlines; rather, this is the insidious everyday racism that allows those vile events to happen by perpetuating a status quo that needs a radical shift. It’s the perspective that is so unsettling: this is not a book that gives voice to black characters – in fact those who feature are portrayed negatively, because we see the story through the eyes of people who have already judged them. It’s disturbing, and it’s meant to disturb, because it’s all too real and recognisable. I was reminded of images in the news five years ago, of groups of Latina women holding placards stating that “the silent majority stands with Trump”. I found this perhaps even more chilling than the rallies – this man despised the “silent majority” for their race, their gender, their class – and yet they lifted him on their shoulders to become a volatile and divisive world leader. Harmful views expressed publicly can be taken down publicly; it’s the silent ones that go unnoticed, and these are the ones García Robayo tackles. The real disease is not Pablo’s “holiday heart”, but rather the transmission of these attitudes to the next generation: Rosa and Tommy are as apathetic and depraved as their parents – rejecting Lucía’s attempt to spend some time with her, Rosa doesn’t want her mother to read, but rather to die, or at least to get very sick, and Tommy screams in public that he doesn’t like black people. I cringed reading these things, but I think that’s the point.

In a recent interview, director Carolina Orloff talked about Charco’s efforts to pair authors with the right translator for their work, and nowhere was this more evident than in Fish Soup. Coombe’s connection with García Robayo’s narrative voice continues in Holiday Heart: she explores a wide range of slang both contemporary and (for purposes of characterisation) out-dated, and maintains the delicate balance of García Robayo’s prose, which switches seamlessly from the understated to the exuberant, the base to the profound. Holiday Heart is acute, provocative, concise and raw, and is a short and powerful novel about many things – time, relationships, identity, infidelity, apathy, parenthood, class, race, gender – but above all it is a warning: do not be complacent, do not accumulate “dead time”, and do not accept harmful attitudes and stereotypes just because they exist. It offers, like one of the housekeeper’s foot massages, “a combination of pleasure and revulsion”, an opportunity to look inside ourselves and think, with every reaction we have – what would Pablo and Lucía do? And then do the opposite.

Don’t miss: the (online) launch of Holiday Heart on 7th July! I’ll be talking to Margarita García Robayo and Charlotte Coombe about writing and translating this gem of a novella, and you can book your (free) virtual ticket here. 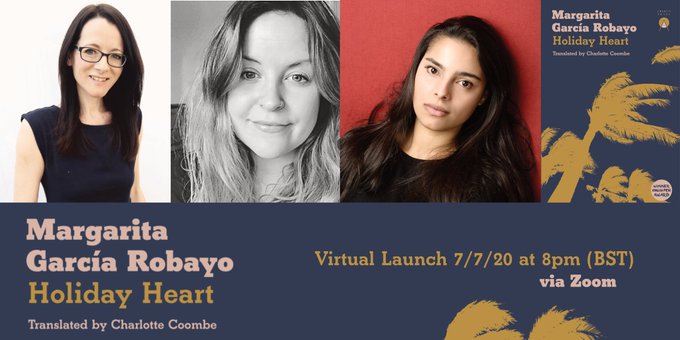