Last week I reviewed María-Mercè Marçal’s The Passion According to Renée Vivien; I’m delighted to bring you today some intimate insights into the translation of this novel from Helena Buffery, who co-translated it with Kathleen McNerney.

How did you discover this novel, and what made you want to translate it?

Helena Buffery: The novel was one of the earliest contemporary Catalan texts I read when it first came out in the 1990s and really impressed me at the time for the audacity of the writing: this is a novel that takes on the Republic of Letters and explores it from the margins, creating a rich, polyphonic, and spatially and temporally diverse world from the fragments and traces of a (meticulously researched) life. It reads beautifully; culminating with the breathtaking final chapter, which I could not quite believe was constructed entirely from fragments of Vivien’s poetry (but I can now promise you that this is the case). Back then, when I had the time to travel quite regularly to Paris and Barcelona, I was fascinated by the different perspectives the novel offered on quite familiar spaces.  I remember being transported into a richly nuanced, complex and believable world.

I returned to the novel more recently as someone with a great deal of interest in the way minority literatures (and particularly Catalan literature) travel, and having written on these issues from the perspective of cultural (in)visibility and (un)translatability. Given the recent increase in translations of Catalan literature and also of Iberian and Latin American women’s writing, I was very interested in exploring why a figure as important María-Mercè Marçal – a supremely charismatic and openly lesbian poet, translator, feminist thinker, essayist and activist to whom numerous Iberian writers profess their debt – had such a limited presence in English (beyond poetry magazines and anthologies). 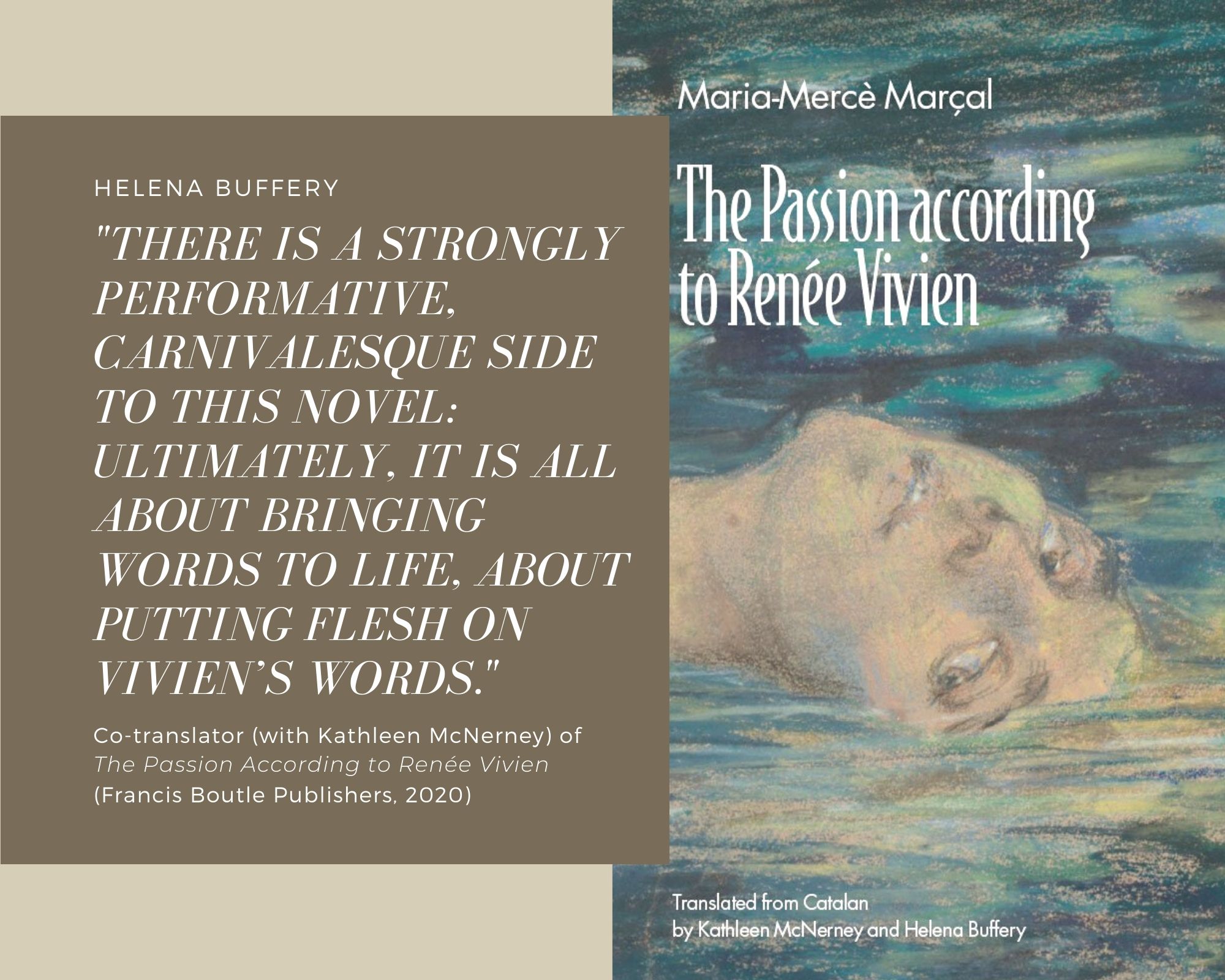 Why do you think such an important and recognised piece of work hasn’t been published in English before now?

I think a significant factor is the subject matter, the fact that it is by a Catalan author but not explicitly about Catalan culture (no Barcelona, no Civil War, little reference to any Catalan landscapes). Another factor, I believe, is that it is written against English (understood, as in the sense of Vivien’s own process of self-translation, as a form of resistance and rebellion against the normative, the hegemonic, the neo-colonial). Having looked more closely at the German, Italian and Spanish translations, I began to consider the possibility of translating elements of the novel (as I think many of the chapters work as stand-alone pieces, in the manner of sketches or even short stories), and it was then that I bumped into Kathleen McNerney at a conference on Marçal in Cambridge and learned that she had begun translating the novel many years before, but had been unable to find a publisher. Kathleen is widely recognised as a pioneer translator of Spanish and Catalan women’s writing – she began translating Marçal back in the 1980s (selected poems from Bruixa de dol/Witch in morning appeared in the Catalan Review in 1986), and collaborated with her in events on feminist writing in Barcelona. We corresponded for a while before agreeing to co-translate; Kathleen was in touch with the Maria-Mercè Marçal Foundation to enquire about rights and permissions, and then was able to secure a series of writing retreats to work on the novel.

Once you had made the decision to embark on this project, how did you and Kathleen McNerney approach the co-translation?

We agreed to split translation – with one of us (me in the end) focusing initially on Sara T.’s narrative and the other (Kathleen) translating the other voices. We then swapped and revised each other’s work, as well as meeting together in Barcelona and Cork to discuss overarching issues (how to translate certain key terms, what to do about the intertextual references, the translations of the poems, and so on). Once all the pieces were together, I took responsibility for editing and correcting the whole text and ensuring cohesion. This was very much helped by the fact that I am very familiar with the Maria-Mercè Marçal archive in Barcelona, so I have read all of the notes, readings and drafts that are preserved as traces of her creative process, and I also undertook further research on the different voices included in the novel. In some cases, such as the prologue and first chapter, for instance, this led to quite extensive adjustment, in order to bring out the subtle irony that pervades the Catalan original (Woolf’s Mrs Dalloway was the key inspiration here). In other cases, such as the exquisite Kerimée chapter, the writing is pretty much entirely Kathleen’s.

This is a translation from Catalan, but about a French context. How did the multi-lingual features influence your translation?

We agreed to deliberately interventionist translations in parts. On the one hand, we opted to preserve fragments which appeared in other languages (including fragments of Dante). On the other hand, we compensated for the disappearance of Catalan in translation by augmenting the plurilingualism of the text in parts. The decision to source the French originals for certain fragments and quotations in the Sara T. narrative, for instance, was a decision taken jointly in order to make it clear that Sara T. is translating, and often reflecting consciously on the process of translating, from French – hence, for instance, the indecision between “sorrowful” and “painful” to render “douloureux”, when in Catalan that hesitation is simply expressed using a comma the first time it appears. In some ways, the inclusion of fragments in French that Sara T. is trying to translate allows us to remind everyone that she is not French herself, but Catalan. This was important to us, given the impossibility of keeping Marçal’s exquisitely creative translations of Vivien’s poems – it would have added too much to the length of our version. Even so, it would be great to be able to publish all of the different versions in parallel one day! You’ll also have noticed that there are numerous places where we have gone for words with Old French etymology in order to keep the sense of a process of writing against English I mentioned before. Words like blame, regret, verse, vanquished, damsel, coquetries, insouciance etc… and even the more unusual “badinage” which I use in the prologue to translate the Catalan “asteisme” (asteism). I decided that “asteisme” was sufficiently marked in Catalan to warrant an equally marked choice in English.

Another significant intervention was my introduction of recurrent references to trial and error with each use of the word choose (“triar” in the original Catalan). These are intended to prepare for the word-play on “triar”-“trair” (“to choose” versus “to betray” – or as I have it, “trial” and “betrayal”) in Sara T.’s meditations on the nature and (im)possibility of desire. But they also fit in with the constant reference to trials and betrayals in Vivien’s hagiography of martyred queens, and with meta-reflection on the (im)possibility of translation and representation: traduttore, traditore, the translator as traitor. I also quietly corrected incorrect references to dates (such as Barney’s birthday), place-names and so on, where I thought the error was just a slip. In some cases, the errors aren’t so much errors as a reflection of the sources available on Vivien in the 1980s and early 1990s.

Francis Boutle Publishers focus on books from minority or minoritized languages; was this why it was important to you to publish The Passion According to Renée Vivien with them?

We approached Clive Boutle primarily for the really obvious reason that he is the first publisher to have brought out a book by Marçal in English – her posthumous The Body’s Reason. I also really liked the edition of Josafat that he did with Peter Bush, a text which I don’t think many publishers would have taken the risk to publish. It felt right to take the novel to him, even though in many ways Marçal deserves to be included alongside other great twentieth-century feminist authors. I myself sourced the image for the cover, in the Smithsonian archives, inspired by the exploration of the limits and possibilities of visual representations that threads through the novel. It was painted – more properly sketched in pastels – by Natalie Clifford Barney’s mother. Clive Boutle is responsible for the rest of the design and formatting, and for helping me to be brave enough to re-paragraph the novel in order to introduce more breaths when reading. Incidentally, we were very conscious of the poetry all the way through; this is a novel that can and deserves to be read aloud. I was very attentive to breaths and cadences; partly, I suppose, because I generally work on theatre and performance. There is a strongly performative, carnivalesque side to this novel too: ultimately, it is all about bringing words to life, about putting flesh on Vivien’s words. We hope that The Passion of Renée Vivien will travel to the many different readers it deserves.