Cockfight is the debut work by Ecuadorian writer and journalist María Fernanda Ampuero, and comprises thirteen brutal and brilliant short stories in a superb translation by Frances Riddle. The opening story, “Auction”, sets the tone for the collection: the auctions in question are not genteel sales of antiques, but a terrifying form of human trafficking. People are dragged out of taxis and kidnapped, then taken to a barn where they are stripped down to their physical or financial assets and sold to the highest bidder. 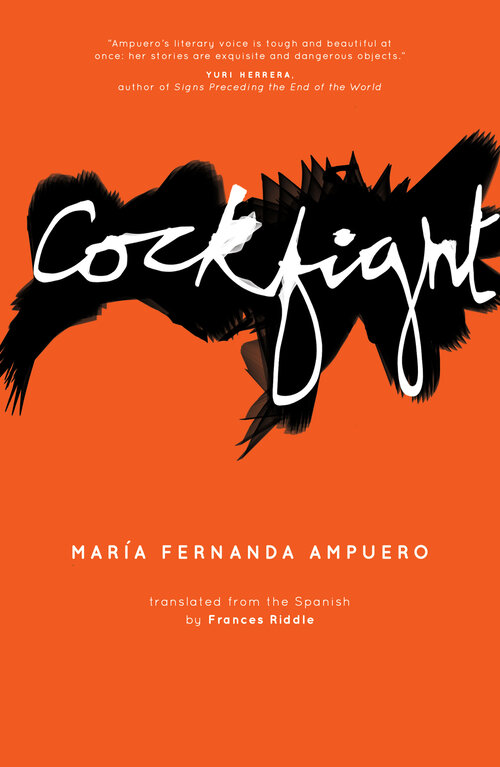 The story opens with the narrator “kneeling, with my head down and covered by a filthy rag”, smelling the familiar stench of cockerels. We learn that she had grown up disposing of cockerel carcasses after cockfights organised by her father, and had developed an idiosyncratic but successful technique to survive harassment and rape attempts by the lowlife gamblers attending the fights: she would smear herself with the blood, guts and excrement of the dead birds, and stick a severed head or two between her legs when she went to sleep, to deter the men she had previously found peeking up her skirt when she woke.

Snap back to the auction, and a terrified middle-class man is sold off, followed by a desperate young woman who is handled like a piece of meat because, as the narrator observes, who’s to stop the auctioneer from groping her? There are no rules or laws in this horrific scenario, and so the resourceful narrator has to draw on her former experiences to ensure her survival. It’s a powerful opening story, and had me hooked.

The remaining twelve stories have a lot to live up to after such an explosive opener, and for the most part they do exactly that. From the nanny who tries to warn her charges that “we should be more afraid of the living than the dead” to the beautiful friend hiding a terrible secret, the beaten child turned voodoo warrior (“another lost girl in a world of lost girls”) to the young woman tied up in a shed by her brother so that the men of the village could do what they wanted to her, the women in Ampuero’s stories are prisoners in their homes, victims of “what a person is capable of doing when there’s nothing to stop them.” Yet they are fighters: they use the scant resources they have – abjection, witchcraft, tenacity – to survive the horrors inflicted on them.

Though each story is strikingly (and memorably) individual, there are connecting themes (and even, on one occasion, connecting characters) linking them. Casual, everyday sexism is taken for granted: households should have a (male) “head” if they are to command respect, religion is manipulated by godless violators as a pretext to control and “tame” women, beatings are readily accepted as necessary, and women are confined to the domestic space. People are monstruous, and grotesque imagery abounds (“He opened and closed his mouth, as if calling out their names, but no sound fell from that toothless gap, only maggots”), and the stench of blood and other bodily fluids pervades the stories. Religious faith melds with pagan magic in a way that places women at the centre of the story: in “Passion” a woman who is feared for her magical powers returns to the village where she was once a “creature of beatings, daughter of brutality, princess of the nights that end with wounded women”, in order to meet a special man; her love and powers are gradually revealed to be the secret to Christ’s miracles. In the horrifying “Mourning”, the two sisters Marta and María (Martha and Mary) are given a shocking contemporary re-imagining, María martyred “so she would understand from her scars that cruelty would always triumph over helplessness.” And yet there is a greater force at work here too: Marta fights her sister’s oppressor with “her dedication, her deference, her devotion, her broths, her tenderness, her herbal infusions”, wresting back power with quiet determination and a little black magic.

Frances Riddle’s translation is, as ever, admirable. I greatly enjoyed her exuberant rendering of Gabriela Cabezón Cámara’s Slum Virgin (Charco Press 2017) and her nuanced presentation of Andrea Jeftanovic’s Theatre of War (Charco Press 2020), and she brings the same flexibility to Cockfight. Never shying away from the ferocity of Ampuero’s subject or style, Riddle offers an unflinching insight into the worlds Ampuero inhabits and constructs, with lexical choices that evoke the noise that serves as soundtrack to a story (“The men jeer, roar, applaud. Then the slap of flesh against flesh. And the howls. The howls”), that reveal abominations with a lightness of hand (“With her, I laugh as if there were nothing wrong at home, as if my dad loved me like a dad. I laugh as if I weren’t me, but some girl who slept peacefully. I laugh as if cruelty didn’t exist”), or that sum up in a single sentence all the horrors that haunt a character (“With a switch made of laurel – that switch made of laurel – they ripped up your back, your buttocks, your tiny chest, until shreds of flesh hung loose, like a half-peeled orange”).

With subject matter and descriptions that range from mildly uncomfortable to outright terrifying, these stories are disturbing and unsettling, and that is precisely the source of their power: no airbrushed, sanitised view of womanhood is offered, no false agency given to women who live in fear not just of what lies in wait for them outside their homes, but also within its walls. The insights in Cockfight are edifying and horrifying in equal measure, all upholding the observation in one of the stories that “People are incapable of seeing themselves, and that is the root of all evil.” This is a startlingly brilliant collection in an appropriately merciless translation; I highly recommend it.