I’ve been reading and enjoying Marie NDiaye’s work for twenty years, and for me Self-Portrait in Green is something of a landmark: the first time I’ve read her in English. The style is very recognisably NDiaye (a testament to Jordan Stump’s careful translation), and many of the themes and leitmotifs also resonate with much of NDiaye’s œuvre. The surreal encounters echo uses of the fantastic elsewhere in her work, and both the absent, thoroughly disappointing father and the disintegration or dissolution of the female subject, sometimes unconvinced of the material substance of her own existence, will be familiar to those who’ve read NDiaye before. Yet NDiaye is clear that in her fiction she does not write about herself, and so the resemblances between her “self-portrait” and her fiction indicate that however close we might think we’re getting with this “memoir”, we’re only seeing a small part of a much bigger picture. Indeed, Influx’s press release describes Self-Portrait in Green as “a subversion of the memoir”, and this blurring of genres is particularly interesting. Even the title is evocative in this respect: the French “autoportrait” (“self-portrait”) is a more obvious twist on “autobiographie”/”autobiography”, but even if this subtlety doesn’t translate linguistically, we are still prompted to consider the difference between an autobiography, or assumption of a “truthful” developed and chronological account of the author’s experience, and a self-portrait, which captures only a moment or a stage of life. 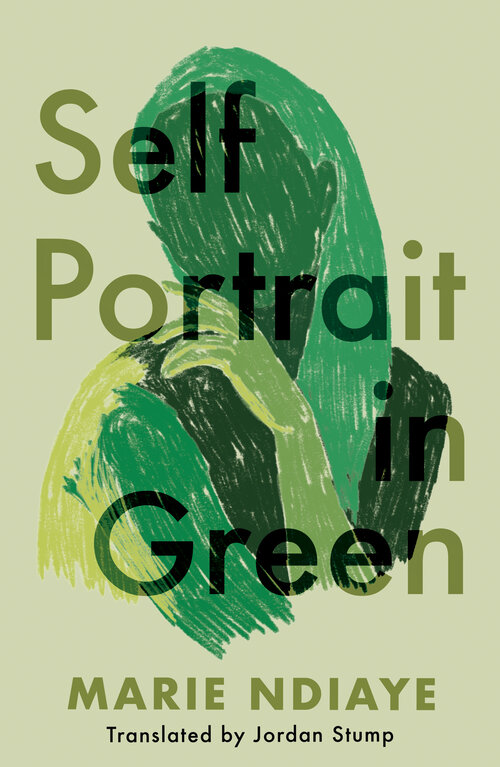 The narrator goes about her daily life – dropping her children at school, visiting relatives – though this life seems anything but ordinary. It is on the school run that we witness her first encounter with a woman in green, who is standing in a garden beneath a banana tree: in this banal-turns-supernatural encounter, the woman seems visible only to the narrator. The second woman in green is a cruel schoolteacher from the narrator’s childhood who comes to her in memory, and the third is the woman she mistakes for her friend Cristina, an encounter you can read in last week’s post. This extract was particularly interesting to me, as its overlap between the quietly mundane and the asphyxiatingly surreal is reminiscent of other works by NDiaye, a  nightmarish quality of being in a perfectly normal situation and yet everything seeming wrong, off-kilter (at one point the narrator even wonders to herself “is this all really real?”) The sense of being out of focus, or the focus being in an unexpected place, or one person seeing what another does not, is also a clever play with the genre of a written “self-portrait”, the contours shifting according to who is viewing. Neat answers are not given, with the narrator herself often uncertain about what she has seen and how to interpret it: this is a book that pulls its reader into a universe that, if not exactly parallel, is both familiar and destabilising – one that, like a portrait, needs to be viewed from both up close and at a distance in order to come into focus.

Other women in green include the narrator’s rapidly ballooning stepmother, who was once her close friend, a suicidal wife, or the projection of a child twenty years from now – and sometimes (or rather, just once) they may not even be dressed in green… Relationships in Self-Portrait in Green vary from the apathetic and the pitiful to the vampiric and hypnotic, and if the women serve as some kind of mirror for the narrator, then perhaps they are at once the conflicting desires inside her own heart and a projection of the lives she could have lived. They are certainly ubiquitous, and despite their unsettling effect on the narrator, they are necessary to her: “they decorate my thoughts, my invisible life, I need to remember they’re there, at once real beings and literary figures, without which, it seems to me, the harshness of existence scours skin and flesh down to the bone.”

The translation is attentive to NDiaye’s style, even if it lacks a little of her trademark concision, the economical lyricism that characterises so much of her work. The vocabulary is rich, though occasionally a little more formal in the English than in the French equivalent, owing to different fields of vocabulary usage between the two languages. Nonetheless, this is a careful translation that is respectful of the author and shows a deep acquaintance with her œuvre, and it deals particularly well with the surreal aspects of the text (as you can see from last week’s feature). In particular, the black thing that moves too quickly to grasp features both in this early section and in a chilling final scene: it comes from (or may be) the Garonne river, a pulsing presence that runs ominously through the fragments of narrative. Early on the river is described as “brown tonight, heavy, almost bulging”, and the town waits nervously but passively for the banks to break and the flood to come: if there is something inexorable about the swelling and pull of the river, so too the novella wields a destabilising and hypnotic power, hinting at dark things beneath the surface.

Review copy of Self-Portrait in Green provided by Influx Press