I have to start this review with a confession: I was a bit nervous about reading Poetics of Work. The nerves stemmed entirely from the knowledge that Lefebvre is not known for being an “easy read”, and I read Poetics of Work at a time when ease seemed as desirable as it was unattainable. Yet my fears were unfounded: yes, this is a challenging book, one that made me think deeply about the issues it tackles, but this happened in an exhilarating, uplifting way. I want to kick off by quoting from the beginning of the book, as in the first paragraphs there is a perfect crystallisation of its main concerns:

“The wind was in the north and the planes were circling, the shops were open for the love of everything under the sun, riot police were patrolling four by four and junior officers by threes out in the street.
There isn’t a lot of poetry these days, I said to my father.”

Poetic expression, social comment, anti-establishment feeling, and an omnipresent father. These are the key elements of Poetics of Work, a manifesto on the value of being a writer and thinker in an age of commodification, in which Lefebvre attempts to carve out the possibility of “work” not having to be measured by hours in an office, salary earned, or “usefulness”. 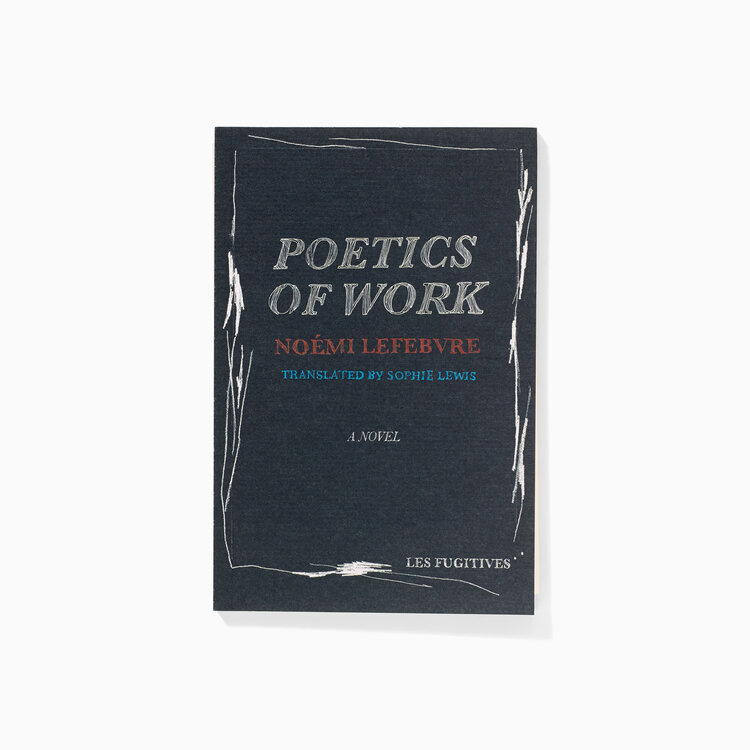 The father thinks that poetry is of no earthly good when wars rage, suicide bombers detonate, debt abounds and society is merrily heading to hell in a handcart. The narrator manages his patronising tirades with admirable sang-froid, and deftly deflates his hubris without ever being cruel: “My father was about to leave for Notre-Dame-des-Landes or for the Larzac or Calais or the Vercors or Ventimiglia, basically for somewhere to do something.” The father might be considered “useful” in this modernity that has no place for poetry, but the narrator has the measure of what this “usefulness” really is.

There are some timely reflections on the role of art: can it ever entail true freedom of expression if there is so much expectation on the function it ought to perform, and what it should “do”? Yet this is not an introspective or self-indulgent essay: firstly, a dry humour underlies every observation (look out for the “conspicuous hat with a radical bobble”), and Lefebvre has much to say about modernity, rape culture, and the notion of “freedom” (“imagination was being blocked and thought paralysed by national unity in the name of Freedom, and freedom co-opted as a reason to have no more of it”). In this vein, there are several observations on the insidious nature of state control, with more than a hint of wry humour in the expression, as in this dialogue between the narrator and their father:

‘But people are still shopping in the sales.’
‘So we can’t be at war.’

‘The police are checking handbags and ID cards.’
‘That means it’s war.’

‘But there are no tanks or any shelling on our good city of Lyon.’
‘It’s not war, then.’

The father is a repellent figure, an egocentric, bombastic, soul-crushing misogynist who is quick to point out the narrator’s “chronic hopelessness” owing to an inability to fit in with capitalist society. Lefebvre’s narrator never explicitly questions why this inability should mean that they are reduced to being “unfortunately and perhaps incurably nothing but a sad loser”; the success of this treatise is that it never tells its reader what to think, or how to interpret it.

Lewis recently published an interesting piece in PEN Transmissions, in which she admitted a “dirty secret” that she had translated the entire text without realising that the narrator was not given a gender. The immense work that must have been done by Lefebvre to write a gender-neutral narrator in French must have been so delicately done to appear this effortless, and there is nothing in Lewis’s translation that diminishes this. In fact, my own dirty secret is that I spoke with Sophie a couple of months before that interview was published, and she said that she had recently translated a text in which she didn’t notice the un-gendered narrator – and I *still* didn’t realise while reading Poetics of Work that this was the text she had been referring to. When I read the interview I was about half-way through the book, and was able to switch from blissful ignorance to an active admiration of the careful non-disclosure of gender throughout. For this is not a book about being (or not being) a woman, or about whatever we might understand that to mean: it is a book about finding poetry in a world that seems hell-bent on destroying it, a modernity “whose beauty will be revealed in the smog of its exhaust, in its everyday privations, in the dogs that chase their living in the soughing rain or the sinking glare of the unimportant streets…” That Lewis captures the poetry in the banality is a testament to just how accomplished this translation is: Lefebvre is an extremely agile writer, and Lewis has kept up with every move in her translation. In particular, the final two lines are absolute perfection: clever, shrewd, and amusing. Poetics of Work is as political as it is philosophical; it engages with authority and influence, questioning how we become what we are both individually and collectively. It manages to be simultaneously laid-back and urgent, and is a gorgeous manifesto of poetic resistance.

Review copy of Poetics of Work provided by Les Fugitives